Not only has the temperature dived into the teens, but the wind has been fierce, so the wind chill outside has been in the single digits Fahrenheit. The horses don’t have shelters in their large paddocks, and the ground getting to them is treacherous, so for the last couple of days the boarding barn where I keep Tonka has made the decision to keep the horses in. 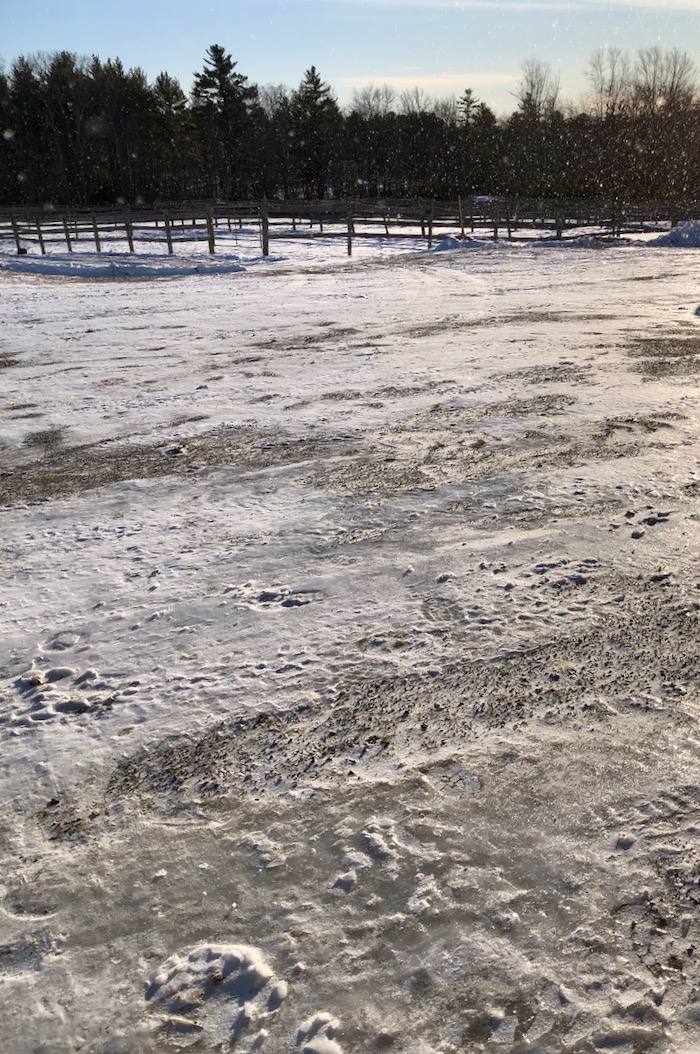 Earlier in the week I arrived on a rare break from clouds and low temperatures. After warming up for a half-hour indoors, Tonka and I ventured out. One has to pay attention to the consistency of the snow. If it’s too wet, it packs into the horse’s hoofs and forms stilts – super dangerous. But this snow balled up and then popped out. It was safe to continue on. 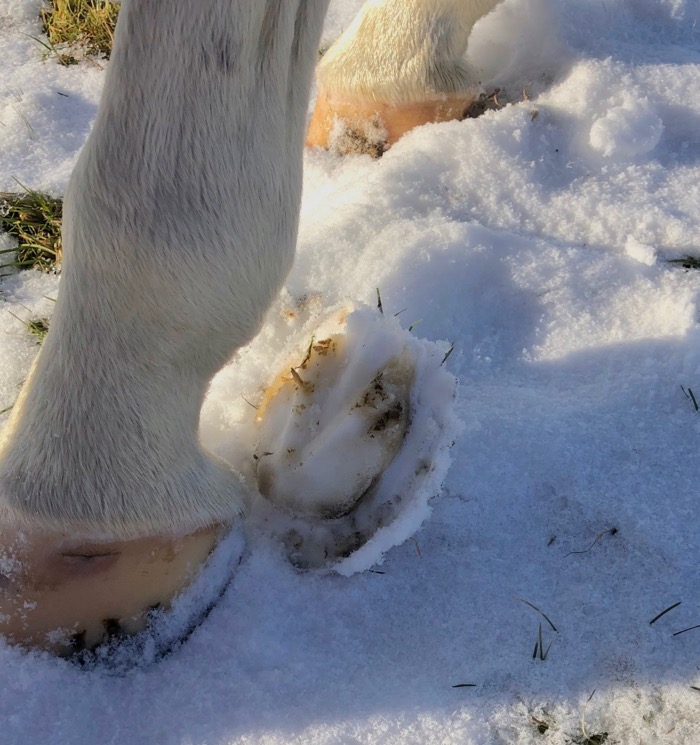 It was sunny enough to have a shadow! 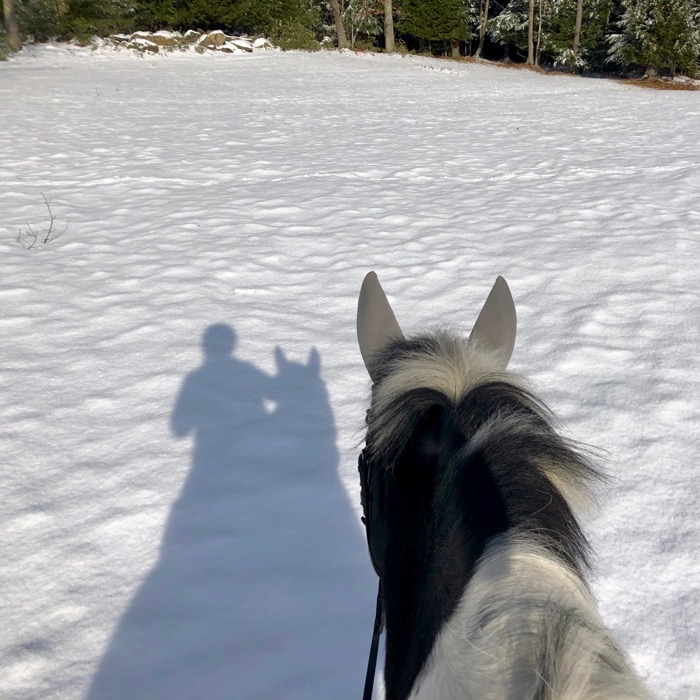 The woods were pretty. 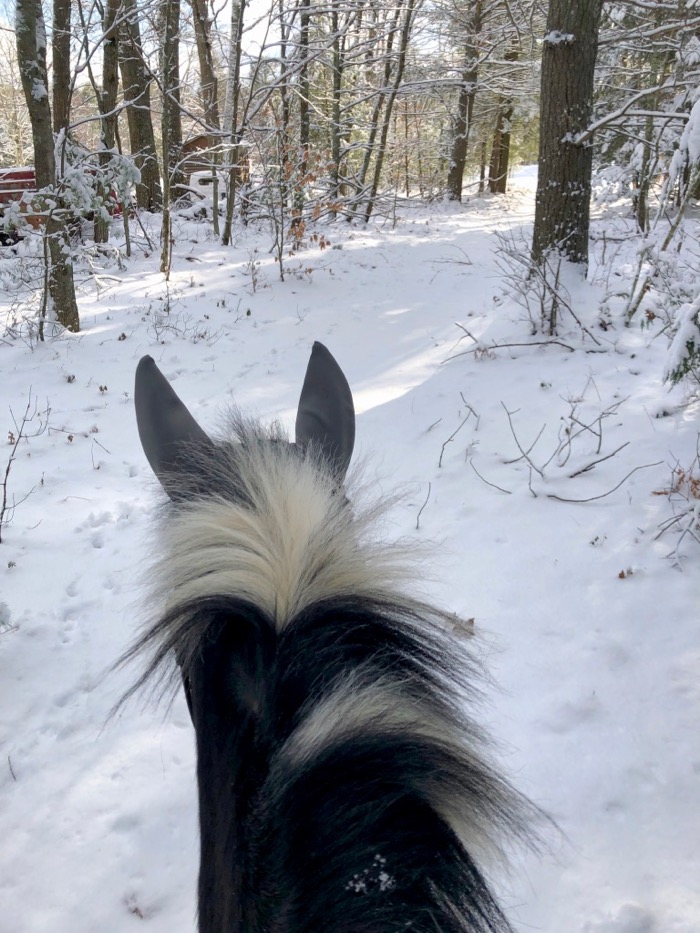 But after this outing, the temperature plunged, the wind picked up, and the sun stayed behind the clouds. Yesterday was so bitter cold that the trainer at the barn cancelled her lessons.

At least Tonka gets to look out into the aisle. Eating apples (here he’s smacking his lips) might make him temporarily happy, but it doesn’t take care of his circulation and digestion, both of which are systems designed for an animal that walks 10 or more miles a day. It’s essential for a horse’s mental and physical well-being that they move. 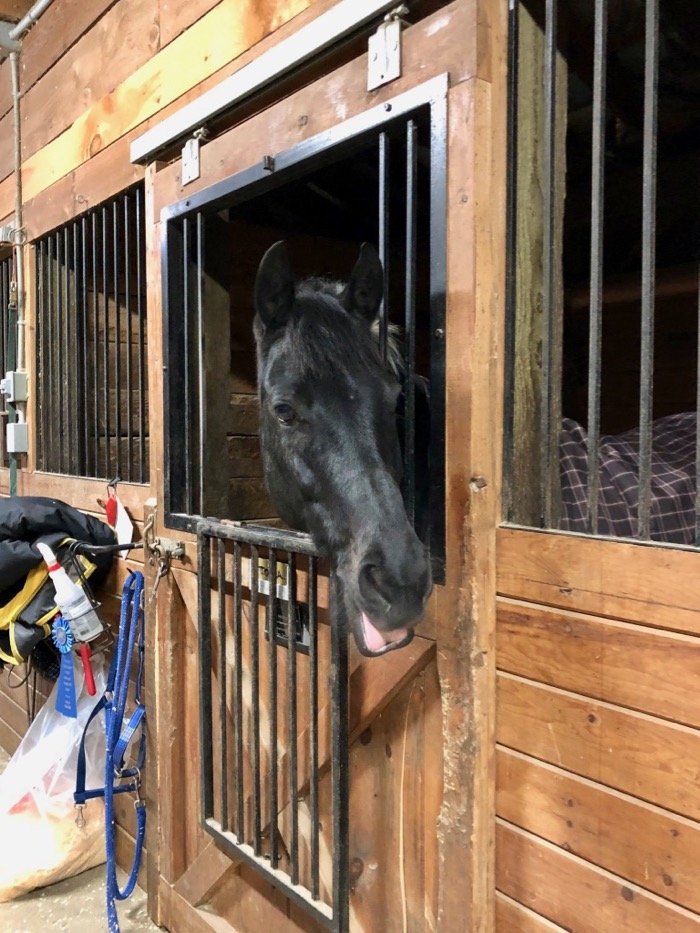 I could hand-walk him around the indoor arena, but we both go crazy-bored, and I maybe manage a mile. Better than nothing, but not enough. So I ride when I can.

When is it too cold to ride?

I’ve read a number of articles on this topic. A consensus seems to be that exertion below 20°F can negatively affect their lungs. I know that we all see photos of feral horses on the Great Plains doing okay in those temperatures, but maybe if you asked the horses they’d say they’d prefer not to move, and to stand with their tails to the wind and their heads down when it gets bitter cold. My horse is stalled and blanketed in a barn that is at least 10° warmer than outside (all those horse bodies warm it up), so there’s quite the contrast when we go into the unheated indoor arena. Also, the arena’s air can be dusty, so breathing that in, when the temperature is frigid, is something to be thoughtful about.

My own rule of thumb is that I’ll get on when the temperature in the indoor arena is above 20°F. It was hovering there last night, so I rode. I’m careful not to work Tonka into a sweat – I don’t want him to go back to his stall damp. We do a lot of walk, and some loose trot and a little canter. We get in a couple of miles. The swelling in his legs from standing in his stall for hours on end goes down. He gets that satisfied look of an animal after exercise. I get my time in the saddle (without which I become a grump.) It’s all good. Even though my thighs, even with my winter breeches on, are red and numb with cold.

You know it’s cold when, even after forty minutes in the ring, I haven’t unzipped even one of the three layers that I’m wearing! 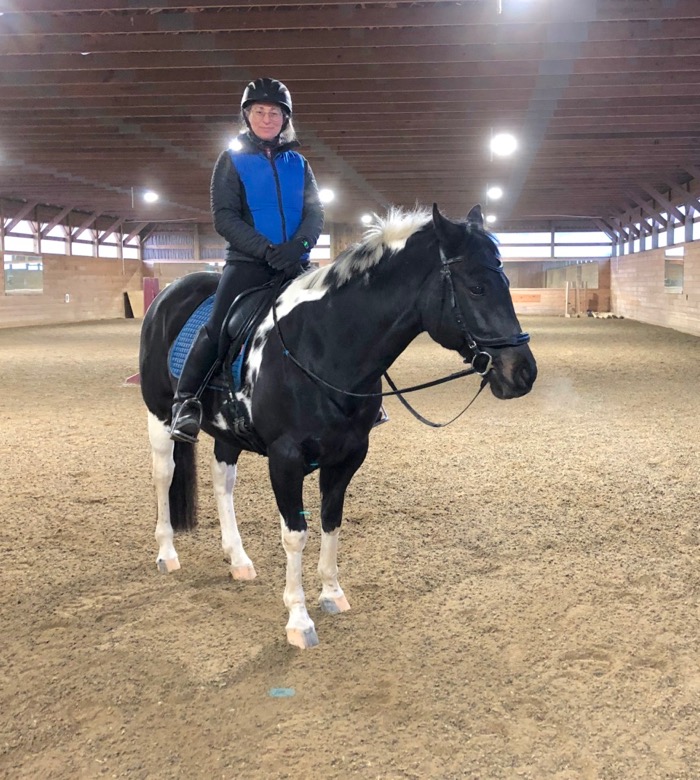 After the ride, Tonka gets a thorough curry before putting his blanket back on. He loves this! I’ve been using my homemade anti-static spray, and we haven’t had a shocking incident yet this winter. Go here for my blogpost about my witch hazel concoction. It also cleans stains and helps dry sweat.

It’s very cold again today. I might be hand-walking. Whatever the temperature, I’ll get to the barn to get both of us moving. Are you in the frigid north? What is your cutoff for it being too cold to ride?

This blogpost is an excuse to use a photo of Scooter! Scooter’s cutoff for going outside is more in the tropical range. This is how he copes with the weather. He is delighted that a son is home from college on winter break. Scooter is helping him to catch up on sleep after finals. Would you be in bed with Scooter, or out at the horse barn with me? 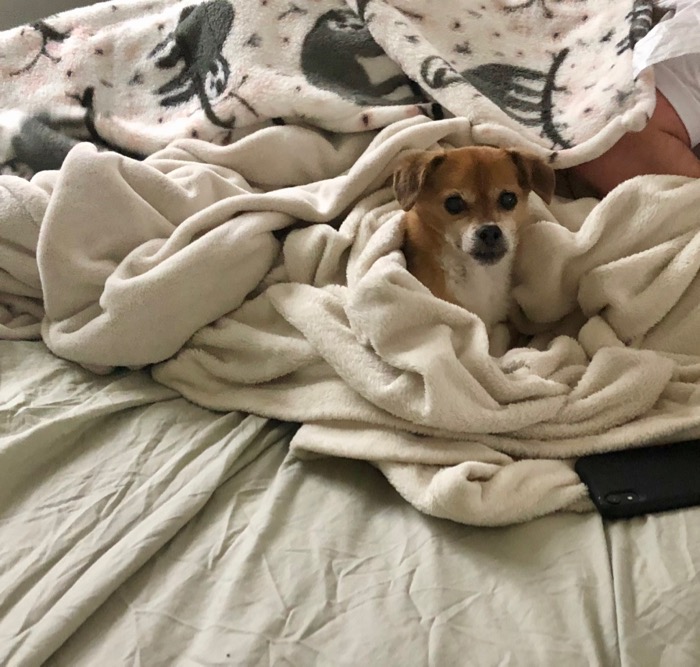