When I train a horse to do a behavior, I care about more than whether they accomplish the task itself. I want them willing, relaxed and focused. If the mental attitude isn’t calm yet eager, then I stop and evaluate what’s going on.

But that assessment isn’t easy and I’m sometimes slow to catch on to the real issues!

The other day, I asked Tonka to do simple carrot stretches. I start with a hand touch, which clues him in to what we’ll be doing. 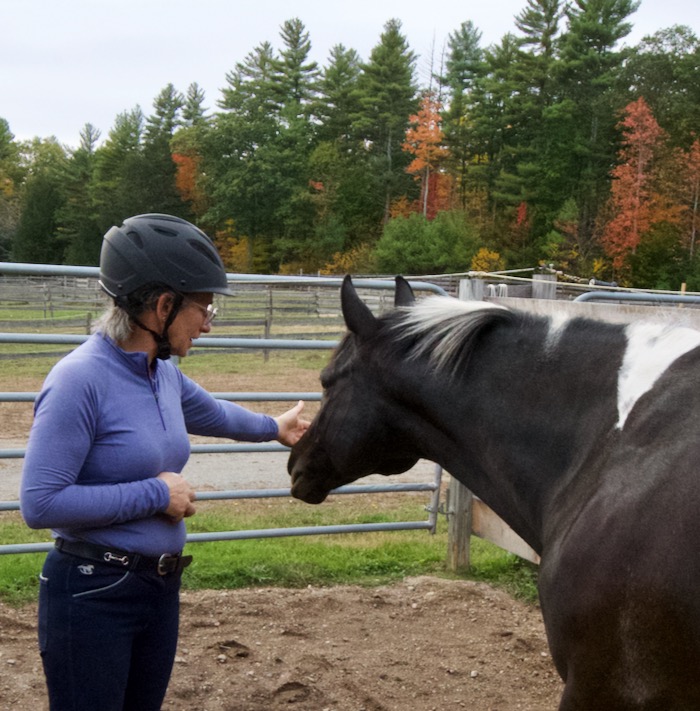 Then we proceed to various positions, which stretches his muscles, and allows me to see if he has any kinks in his flexibility. 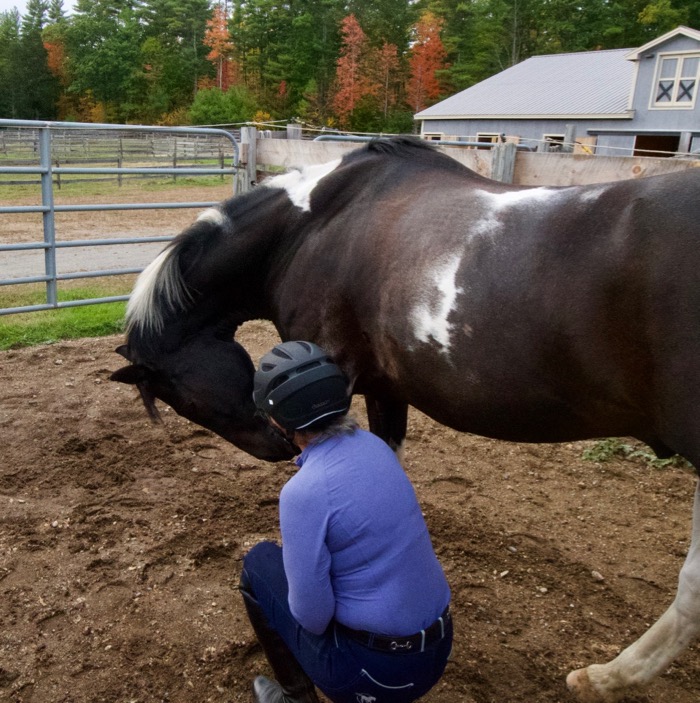 I trained this with positive reinforcement and a marker (aka clicker training). When I say dee! he knows he’s in the right place and will be rewarded with a cookie. It’s quite precise and effective. It can be too precise. If I mark him when his lips are wrinkled, his ears back, and he’s dropped his penis, he’ll offer that again. In no time at all, I’ll have an angry looking horse who waggles his penis when he does stretches!

So when Tonka looks like this, I take a break and figure out why. Yes, he’s coming when cued, but not in a manner that I want. 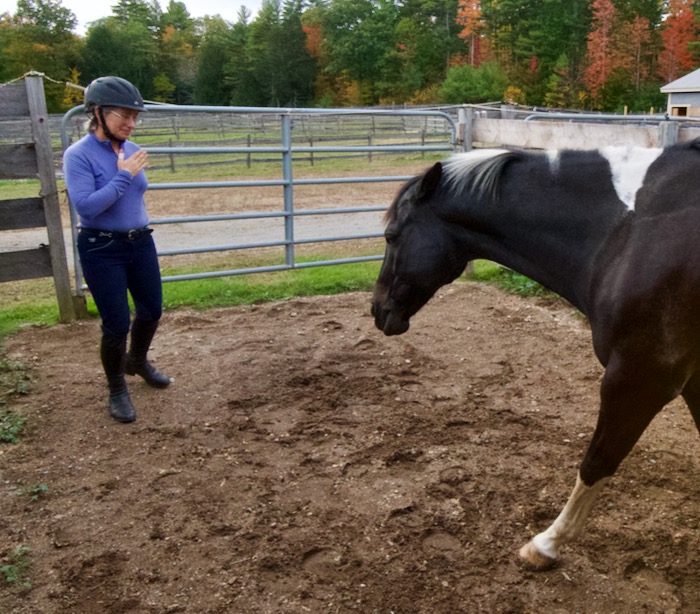 A head lowered, ears back, lips tight, posture is one that horses use to move others out of the way, and how stallions herd their mares. It looks like Tonka is threatening me. 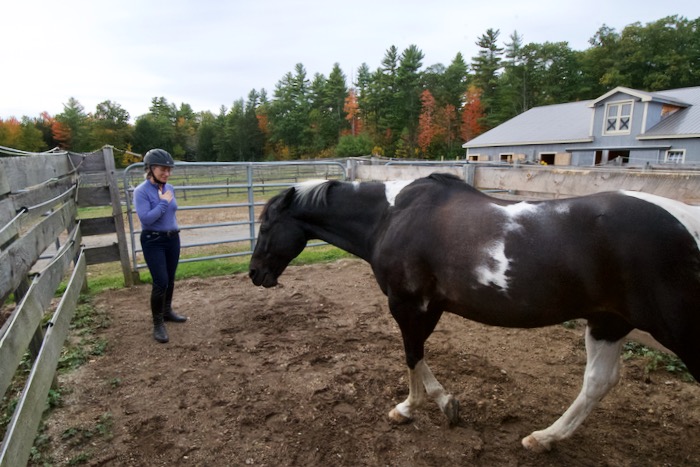 Tonka lives between two mellow mares. They all get along. 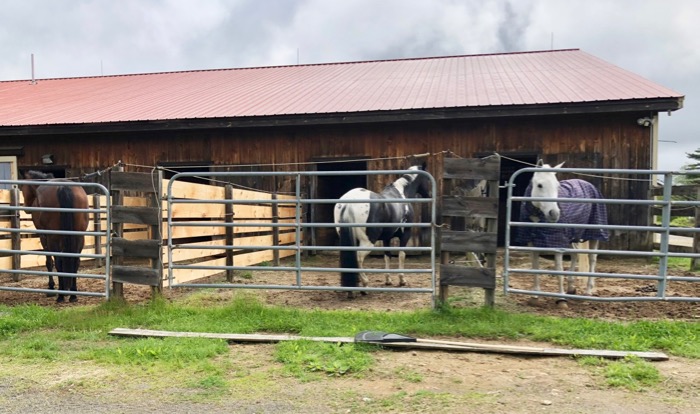 The grey mare had been inside, but then meandered outside to watch what we were doing. 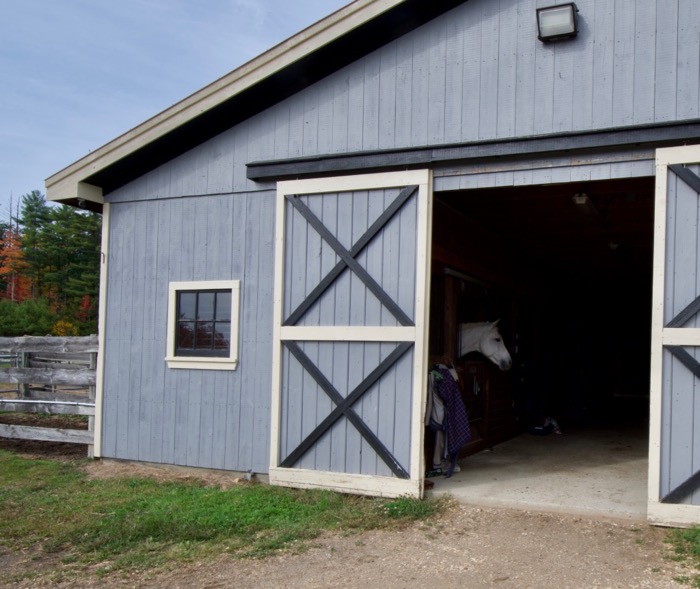 They do fine because they are fed in their stalls. Their small paddocks are for companionable loafing, never eating.

But, there I was, with carrots and interesting things to do. I had created a resource guarding situation.

That face on Tonka was him letting her know that I, and my carrots, were his. You’d think that I would have caught on immediately. I was so focused on Tonka, though, that I didn’t even see the mare arrive. I made the mistake of continuing the training session, and asking Tonka to back up. The first step was quick and willing. 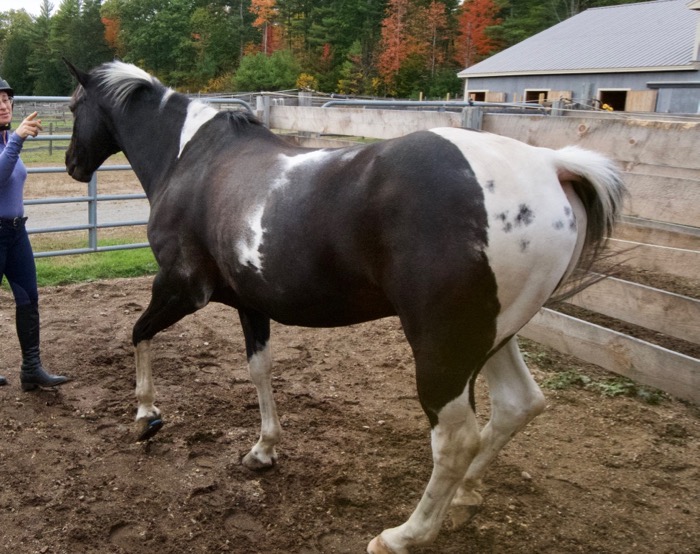 The next was not. 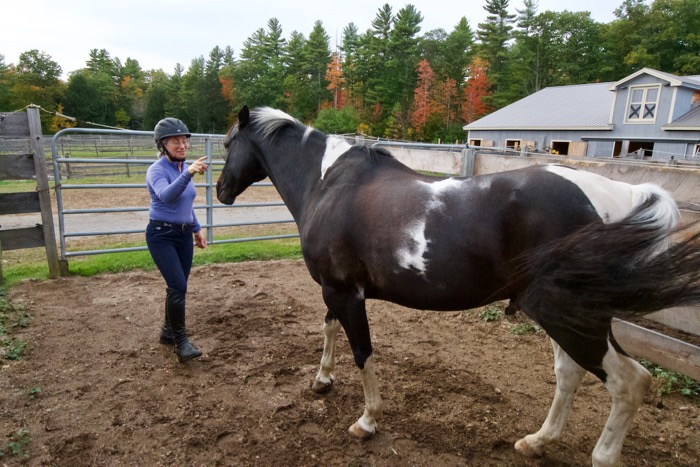 This was when I finally expanded my human view to my horse’s broader perspective.  We humans see only a small slice of the world. Our eyes are in the center of our faces, and we look ahead. Our peripheral vision is poor. Horses are the opposite. Backing up brought Tonka closer to the other mare’s paddock. Tonka, with his wide-angle vision, could see her. While I was focused on Tonka’s head and front feet, he was watching both mares behind him. So, although Tonka backed up, he kept his tense and threatening posture. He also dropped, which he does when frustrated. Which finally made me stop and assess

We do these stretches several times a week, and this grouchy attitude was rare. However, it made sense! On this day, Steve was with me, with his good camera, and the light was better outside, so I moved these exercises out there. I’d been thinking about the environment from my narrow human focus, not my horse’s big wide world. It finally dawned on me that I’d put Tonka between a rock and a hard place. He wanted to do the stretches, but he didn’t want to do them near those mares. Although the sturdy paddock fences looked like a protective barrier to me, he didn’t feel safe. As soon as I realized this, I moved Tonka into the center of the paddock, got a happy face, and finished right then and there. 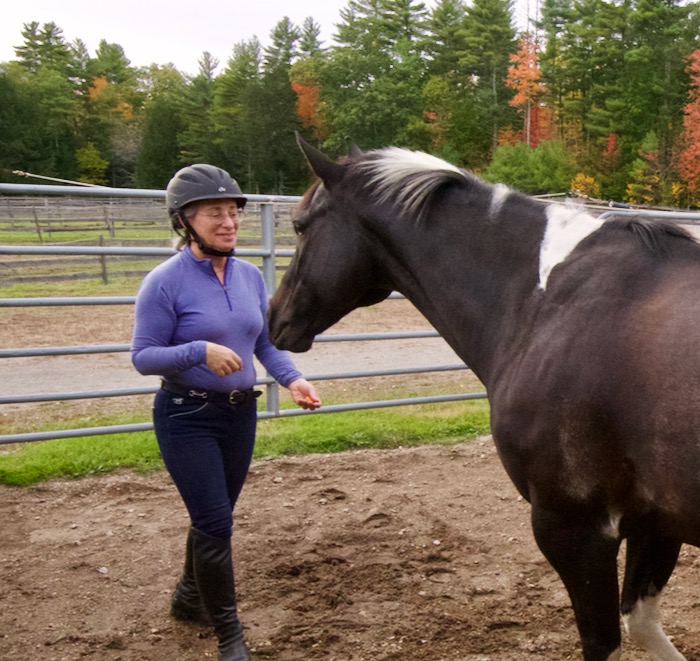 I’ll be talking more about the difference between the horse’s perception of the world, and ours, at Equine Affaire.

2 thoughts on “The Horse’s Bigger Picture”