Tonka and I have been jumping. Granted, the “jumps” are this high. 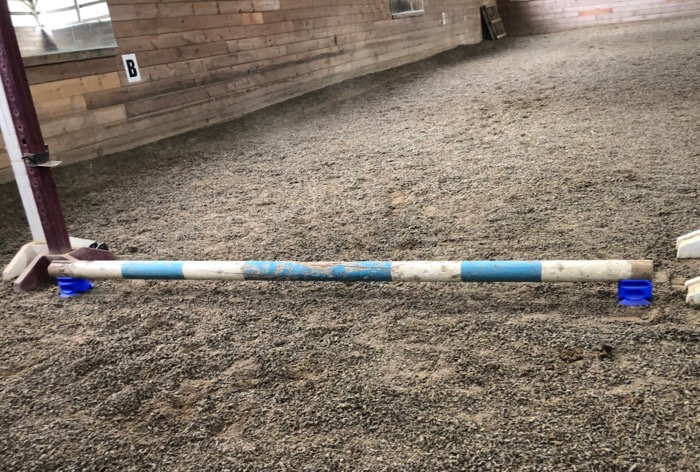 I’m at a hunter/jumper barn, where there are always jumps out, including the easiest of cross-rails. 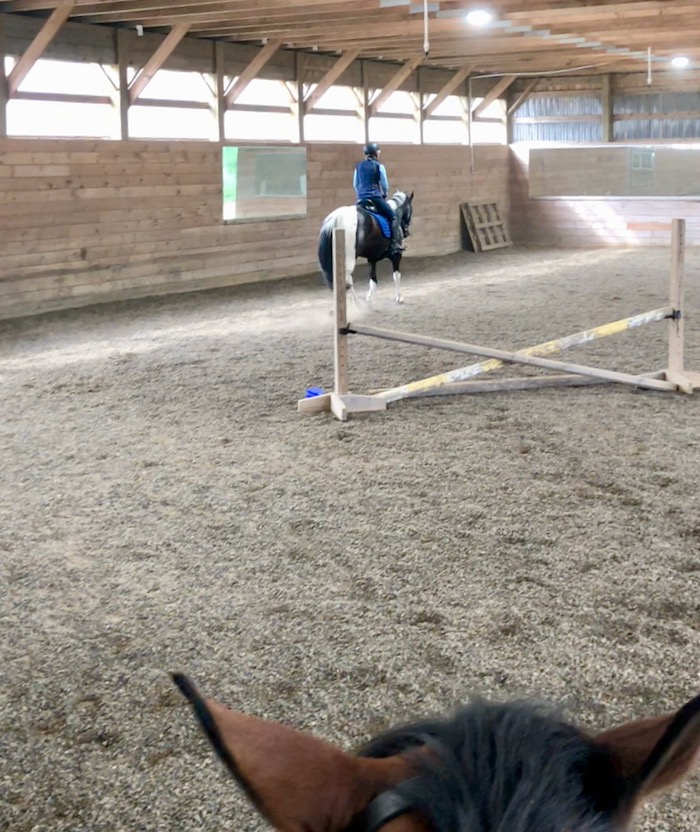 But my little dressage horse isn’t ready for those cross-rails, and honestly, jumping over them isn’t a goal of mine. So, I bought two sets of plastic Horsemen's Pride RR77 Jolly Pets Rail Razers (4 Pack), Red, One Size. I’m taking Tonka over these elevated poles to increase his stifle strength, improve his coordination, and teach him longitudinal flexion – the poles ask for that effort, not me.

As easy as they look, going over raised rails is a challenge for Tonka; if he’s lazy picking up his feet, he trips, or if he approaches too strung out, his rear end scrambles as it tries to catch up with the front. A few uncoordinated attempts aren’t a big deal, in fact, it allows him to problem solve and think about what he’s doing, but overall, I don’t want him to learn from mistakes, rather I want him to gain confidence in his body by going over them with athleticism. So, I break the exercises down into the smallest of increments. First, we do a single pole on the ground. Then two. As he’s gotten stronger, I’ve added poles and have done a set of five. 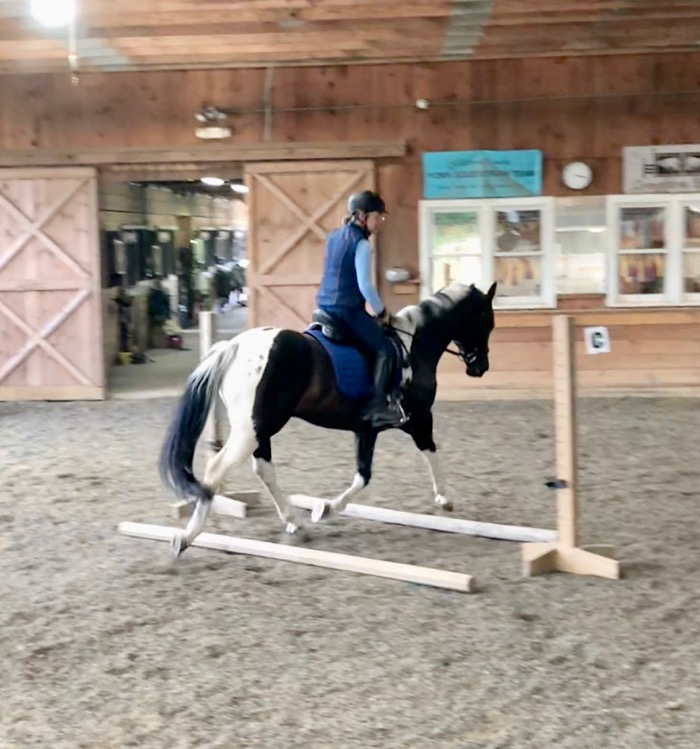 Then I add sets in other parts of the ring, so that as we go over one pole, we think onward! and head for the next.

This past week I introduced the raised poles. First individually, and then in the middle of a set of three. 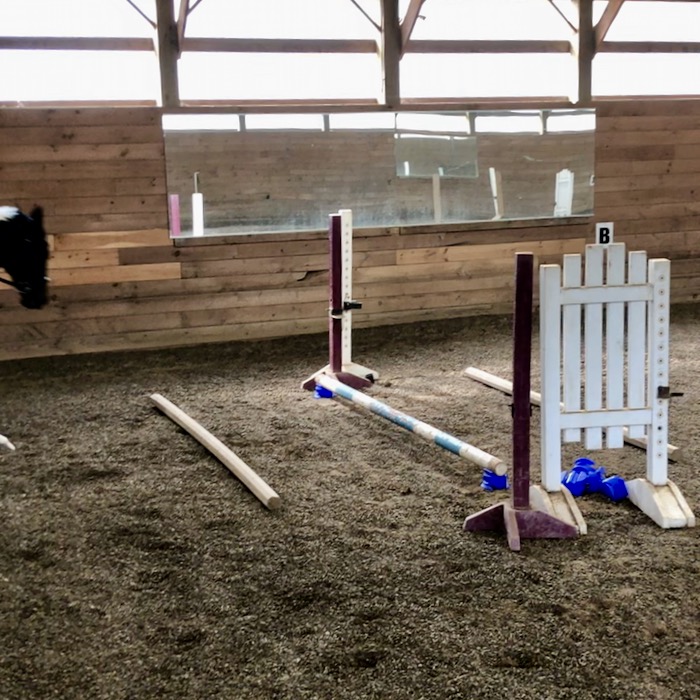 Here’s Tonka, figuring out how to navigate this challenge. Stephanie Plaisted, my “jumping” instructor, was there to help set them up at the right distances, increase the challenges as we were ready for them, and to remind me to keep Tonka in front of my leg.

Look at that eager, bright-eyed attitude!

Tonka quickly learns that if he adjusts his stride beforehand, the prancing isn’t necessary.

Tonka does, though, knock a hind toe against a rail. The next time he picks his hooves up more carefully. He’s engaged in these exercises and thoroughly enjoying himself. 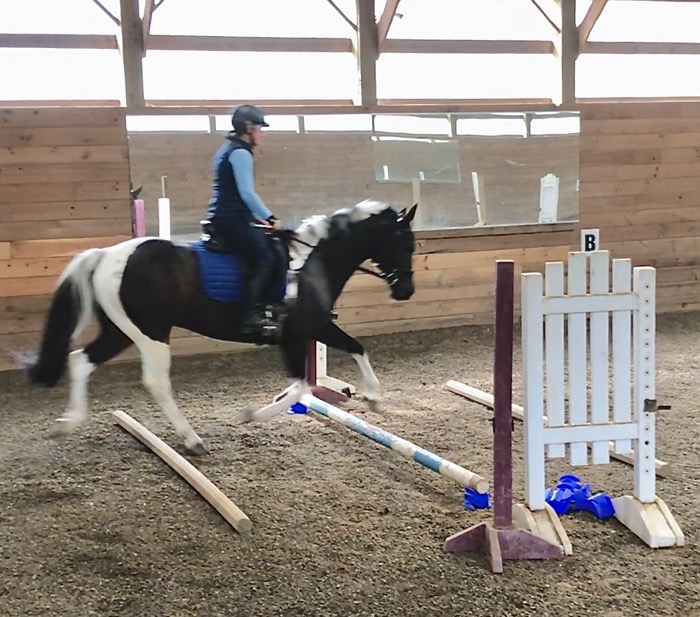 At the end of this lesson, we cantered a course! We did this over single poles, some raised, some not. Tonka was able to shorten his stride coming into the poles, which was so exciting for me, because only a few months ago, if I asked him to condense his body at the canter, he’d collapse into a trot and fall apart. Even better, he adjusted his canter stride with very little input from me because he knew what it’d take to navigate the poles correctly, and he did it himself.

Tonka did one other thing that told me that he was engaged in this sport. I wasn’t doing the best job turning him early enough to create a straight line to the poles. After a couple of times around the course, we took a little walk break, then started up again. As he came to the short end of the ring I felt him straighten, balance around the turn, and find the line. You could practically hear him say I got this, Terry, sit tight. It was such a perfect approach that Steph praised me. I told her it wasn’t me. It was Tonka. 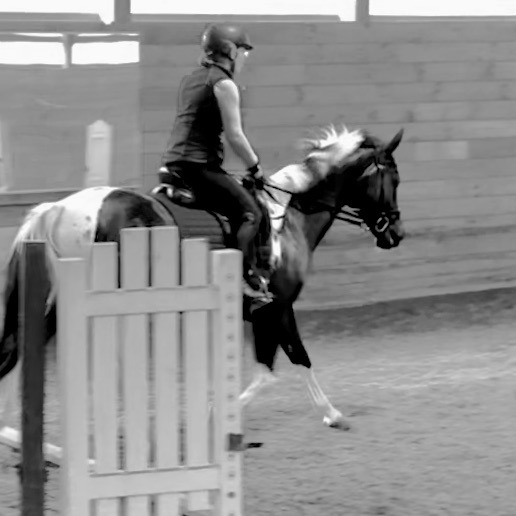