I want Tonka to enjoy our excursions off the farm. To get to them he has to go in the trailer, and I want that experience to be positive for him too.

This is how Tonka feels about going on a trip. Relaxed and eager.

There are carrots in his hay manger, but this isn’t about the food. In fact, he doesn’t eat those, or the hay, until after he arrives. His choice. Instead, Tonka likes to sightsee.

As with everything with horses, good behavior can quickly revert to balky. I’ve found that it’s the details that keep your horse happy and willing. Today I have a tip and two trailering hacks to make traveling better for your horse.

Trailering tip: remove manure! One time, when I brought Tonka home from a clinic, it was pouring rain. Backing out of the trailer, Tonka slipped on manure and slid on his hocks down the ramp. It scared both of us. I learned my lesson, and never back him out of the trailer if there is manure underfoot. Now I shovel it away, or at least push it to the side. Prevention is far better than having to retrain. I also make sure that the ramp and the trailer are clean and dry after each use. That way the trailer is ready to go when needed. Tidyness isn’t just for looks. It’s also for safety. 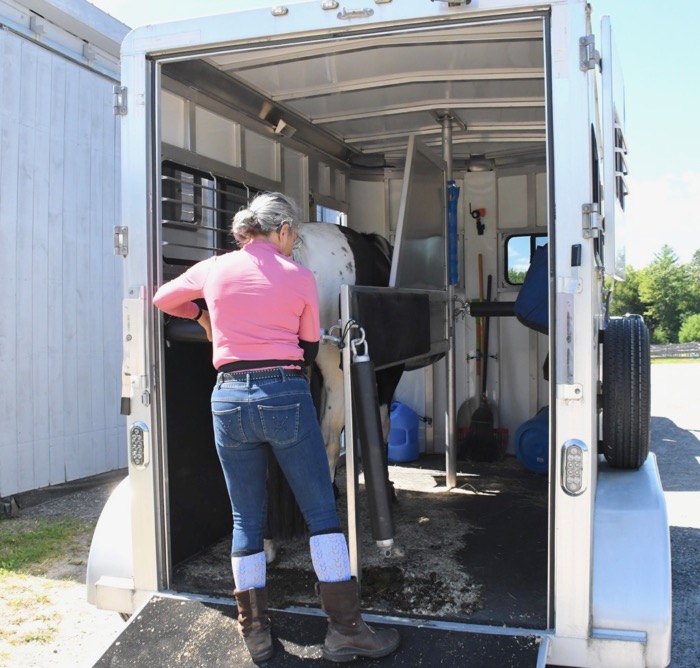 And now for the trailer hacks.

It’s not good for a horse to have their head tied up tight when trailering. Not only is it uncomfortable, but it prevents them from clearing their airways and can lead to respiratory issues. Because Tonka stays put when he goes into his trailer, I don’t use a tie at all. But I worried about him banging his head on the metal post. 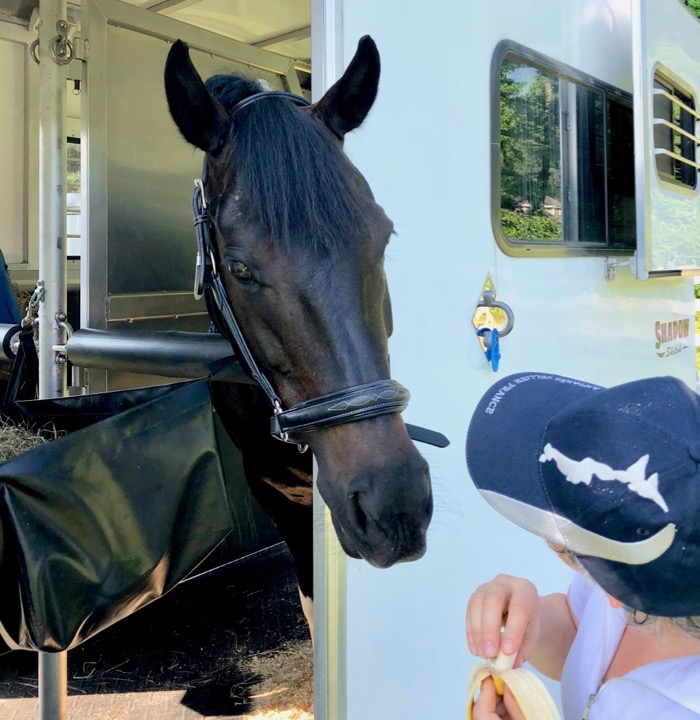 Hack #1: Protect your horse’s noggin with padding.
I bought a pool noodle for $1, slit it, and wrapped it around the divider. Now a bump in the road won’t cause a bump on his head. 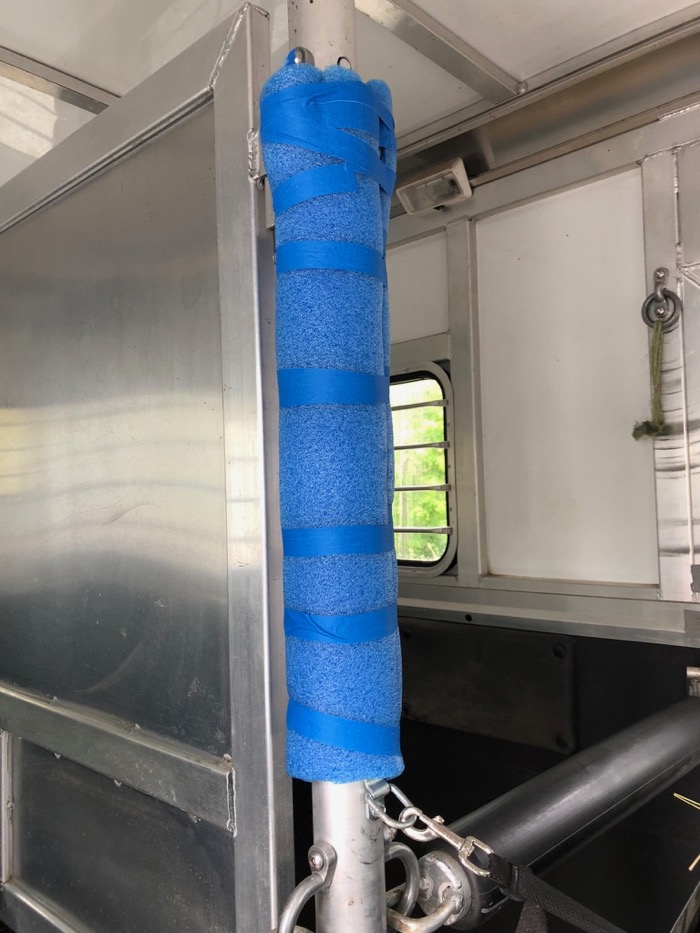 Hack # 2: Tarp tie down to keep the divider open:
I once videoed Tonka backing out of the trailer, and saw something that I didn’t realize was happening.

See how he’s hitting the edge of the trailer and the dangling bumper pin bangs into him? Now I slip the pin into its holder instead of letting it hang. It’s a small thing that has made Tonka more mentally and physically comfortable.

Since I usually trailer alone, I can also move the divider over to give Tonka more room when backing out. 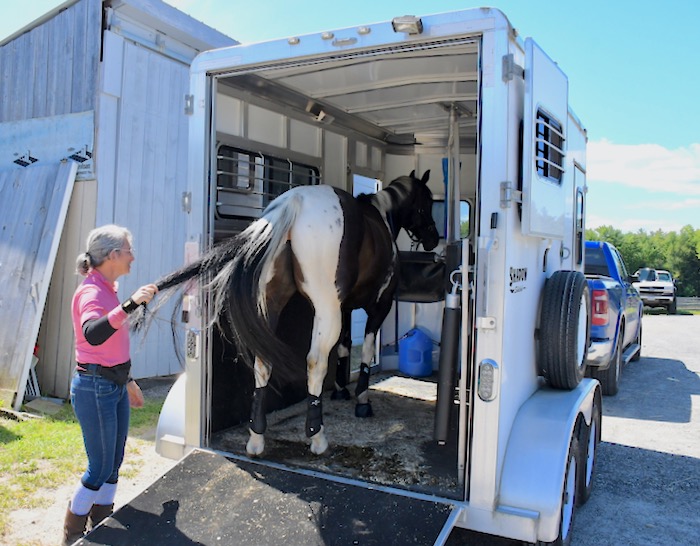 But, if I’ve parked on anything of a slope, it swings back and bumps Tonka. So, I use a Qtimal 30 Pack Ball Bungee Cords, Includes 6, 9, 11 Inch Heavy Duty Gazebo Tarp Tie Down Cords, High Elastic UV Resistant Bungee Cords with Balls for Shelter, Canopy, Cargo, Screen to hold it in place. Simple. Effective. 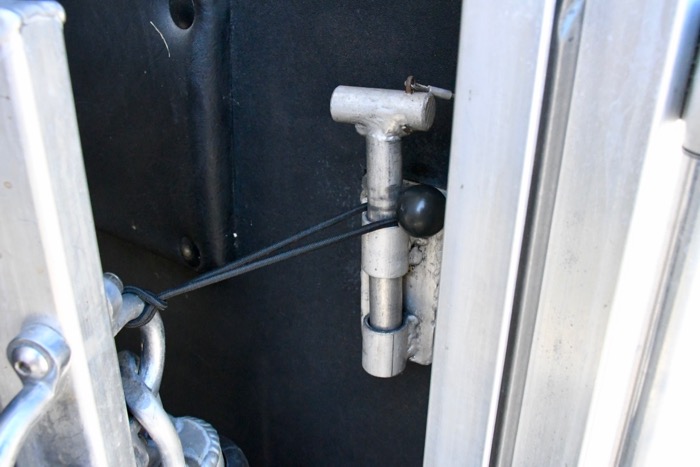 Now when Tonka exits the trailer, he has nothing to worry about. It’s these seemingly small details that keeps Tonka the happy traveler that he is. 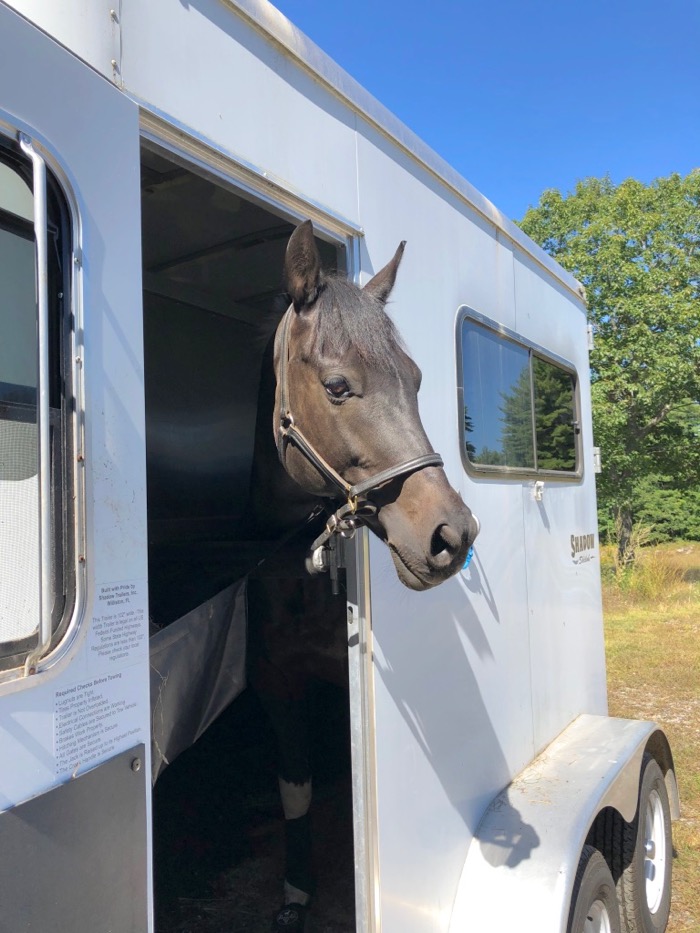 Do you have a trailering tip or hack? Share in the comments!