We are equestrians. We are filled with self-doubt and second-guessing.

My horse isn’t lame. He’s not grumpy in his work. There’s nothing wrong. And yet there is.

Tonka has no oomph from behind. This was his canter at a recent dressage show. Tonka sort of gallumped along. Pretty, but slow. He even broke stride as if he couldn’t keep going.

Once in awhile Tonka drags a right hind leg. His left hock doesn’t have a lot of articulation. He does a bunny hop step before picking up the left lead canter. Nothing awful. But not perfect. If I held myself to the same standards that I expect of my horse, I’d be at the doctor’s office on a daily basis.

Still, perhaps there was something I missed.

Now that Tonka is in Maine, we have a new veterinarian, Monika. On Monday, I had her out to take a look at Tonka.

Monika did a flexion test. 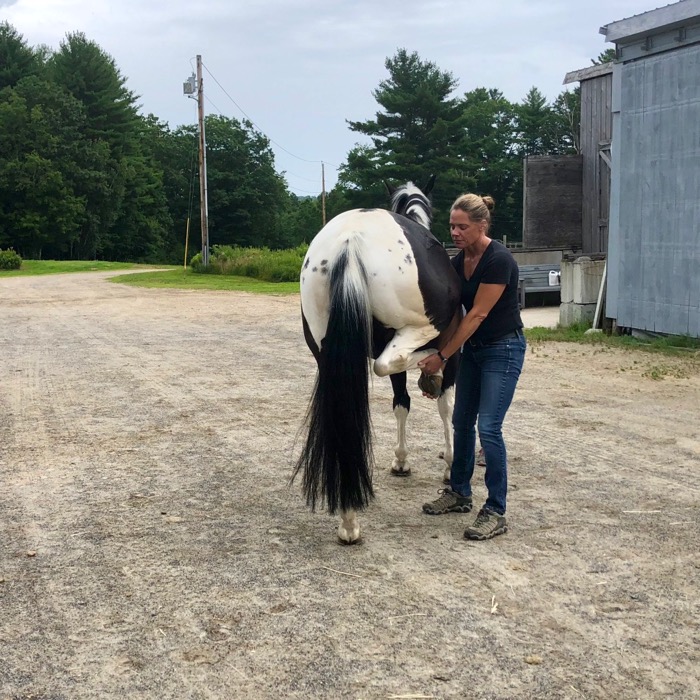 She watched him go, both on the lead line, and under saddle.

She agreed. Tonka isn’t lame, and yet… Although his footfalls are even enough, the top of his butt rolls as if he’s avoiding something.

I wasn’t worrying for nothing. Tonka has a history. Neck pain. Back pain. SI pain. He’s been to the veterinary hospital. Had injections. Went through rehab, with me as his physical therapist. Tonka is better now. Just pokey behind. Maybe if I wasn’t so tuned into him, I wouldn’t have had Monika out at all. But, the last time that Tonka was going really well, his back seized up in a lesson and we had months of slow rehab to get him back to where I could resume basic dressage work. If I pushed him to be more athletic for the dressage show I wanted to enter in two weeks, would his SI joint make him lame again?

Monika thought that Tonka’s SI seemed fine, but the stifles looked iffy. We decided to take x-rays; they were clean. It was worth the $ to know that I haven’t been riding a horse with painful joints. So, guilt removed. Sort of.

The other good news is that Tonka’s back is fine. No pain there! Tonka had a year when this wasn’t the case. A change of saddles helped with that, as well as exercises to strengthen his top line. His back is now strong.

Monika and I discussed how Tonka seems to peter out, especially at shows. The previous week, at a clinic, I asked my trainer if I had inadvertently trained Tonka to go slowly at shows. Was I riding him in a way to cause that? Self-doubt. He adamantly said no – and he’s a very demanding dressage master who would not mince words if that was the case. He thought that Tonka likely needed a very short warm-up. Monika thought that perhaps there was something metabolic going on. He might be one of those horses that needs additional supplements in order to metabolize Vitamin E. Or maybe there’s something else. Blood work was done.

Monika and I discussed whether Tonka isn’t built to do this dressage stuff that requires such engaged movement. Tonka is more Quarter Horse than Oldenburg. Maybe it simply isn’t his cup of tea. Which brought out my second-guessing full-force! Maybe I like dressage but my horse doesn’t. I love how it fine-tunes our communication. I like how it gets us both to flow in unison. I like the athleticism that I feel under me. But maybe that’s purely selfish on my part. Maybe my good American Paint Horse would be better off if we didn’t do that. When I came home from the appointment with Monika, I watched videos of Tonka and me in dressage tests. I looked for signs of misery. I didn’t see them. He looks enthusiastic in the ring. Afterwards there’s a look of accomplishment on both of our faces. (I do believe that like us, animals feel the thrill of achievement. Also, there’s the satisfaction that comes from finishing a physical challenge.) Besides, Tonka wasn’t always pokey in those videos; there were moments when I saw him moving like a fancy dressage horse, and I have the blue ribbons to confirm that assessment. 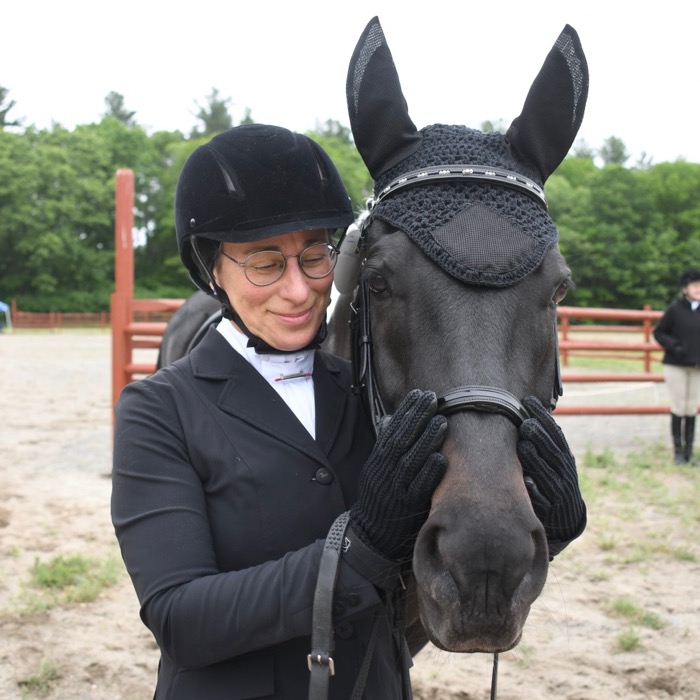 The best that Monika and I could come up with is that over the course of the two years when Tonka did have recurrent pain, that he learned to protect himself by going short behind. In some ways, I’ve encouraged that. More often than not, when he feels out-of-balance, or I feel his nose go up and his back sink, I slow him down. Doing this, his legs get in sync, and he doesn’t crow-hop, but his back remains hollow and his loin remains tight.

Self-doubt. Has how I’ve been riding exacerbated this problem?

I slept badly on Monday night, hashing over how I’d been riding Tonka ever since his physical issues crept up in January of 2017. In trying not to push so hard as to cause him pain, I’ve actually compromised having him go forward in an ergonomically correct way. I’ve lost the oomph in exchange for safe and pokey, which, in the end, isn’t healthy or fun for either of us. I’ve been micromanaging every stride, (something dressage riders are wont to do, even when we know it’s wrong) so that instead of encouraging Tonka to take ownership of, and enjoy his movement, he didn’t want to move much at all. I don’t blame him.

I had a bad night, mired in self-doubt, but by morning I had climbed out of that hole. I came up with a plan. On Tuesday, I rode Tonka forward. I ignored the nose in the air. I ignored the hollow back. I held the reins with soft yet firm contact, so that when he was ready, he could take it. Once around the ring. Twice. Choppy strides. Too fast. Too slow. And then, it all came together. Tonka figured out how to move so that he felt good. It was his idea; I just created the channel so that he could find it. The contact felt like an elastic band that we were both springing towards. He lost it on the corners, but found it again on the straightaway. It’ll take time to get consistency, but that’s okay. The first rung on the dressage training ladder, the base of that pyramid, is rhythm. Tonka owned it. Judging by the perky ears, the relaxed neck, and the sparkling eyes, he also enjoyed it.

But, trotting around the arena with rhythm isn’t going to entirely fix this pokey problem. During the last two years, although I’ve kept Tonka in work, I haven’t done enough to strengthen those stifles. They’re the weak link in an otherwise fit and healthy horse. To keep with my plan to get Tonka to move correctly – so that he thinks it’s his idea and not something that I micromanage – I’ll be getting him out of the ring. Today we went to Kim’s farm and rode in her fields where there are hills to get strong on and the footing is perfect, springy grass. I let Tonka know, using legs and seat, that this was not a time to be lazy. He marched on, forward but not rushed. Then we trotted. Tonka started out hollow and short behind so I asked him to go bigger, to find the stride, and he did. His nose came down, his spine came up, his hind legs reached underneath his belly. Then I asked him to canter, and he did a round leap of a buck, which is his way of saying he’s worried. Then he cantered, but the confidence and cadence that he had at the trot wasn’t there. Cantering on ground that sloped slightly up and down was both physically and mentally challenging for him. At his first footfall on a slight rise in the path, Tonka said that he’d rather go at a careful and pokey trot. With a slight squeeze of my leg, I said Go. You can do this. He did, and he concluded that it didn’t hurt. Tonka’s not yet enthusiastic about cantering in a field, but he’s willing to try. I’ve a feeling that soon enough, he’s going to realize that this not only feels good, but that it’s fun! 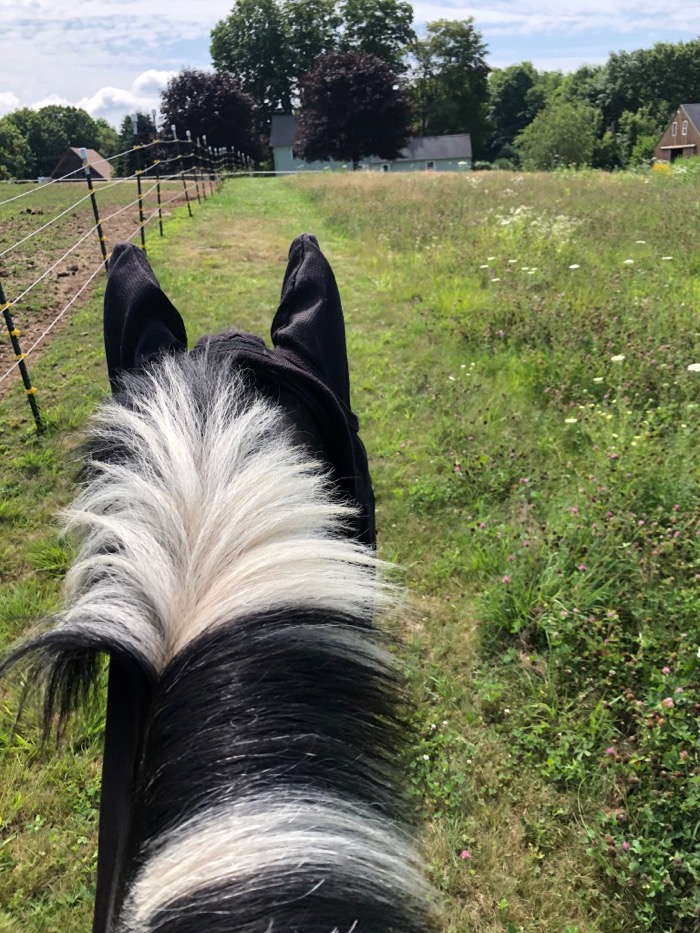 There are other thing to do to complete this movement puzzle for Tonka. We’re now at a hunter/jumper barn, where there are always poles set out in the ring, and a trainer to help us do gymnastic exercises over them. After each lesson, the improvement in Tonka’s way of going is immediate and lasting. Notice on this video that on the 7th stride Tonka lifts up his forehand a bit. It’s subtle, but it’s a very big deal. This is his decision. My job is to create situations where he’ll keep making these good choices about how to move.

I’ve decided that for now I’ll put aside showing in the dressage ring because I don’t want to compromise the rhythm we’re finding in order to do the patterns of the test (which requires tighter circles than we’re capable of doing in cadence right now.) Maybe this fall we’ll get back to dressage competition. Or maybe, by then, Tonka will be jumping cross-rails and we’ll enter a little jumper schooling show. We’ll see!

Have you gone through self-doubt and second-guessing with your horse? Were you able to turn it into productive problem-solving? Tell me in the comments!

13 thoughts on “Self-doubt and Second-guessing”