Susannah has an OTTB mare named Fawn. Fawn raced, not brilliantly, then was purchased by a family inexperienced around horses. A few years later Fawn went to a similar home. Then Susannah bought her.

After a few months of getting to know Fawn, Susannah was ready to get to work with her. Fawn was wary around people and difficult to catch. Susannah has a good background with horses and is in a college equine science program. However, she isn’t comfortable doing traditional training techniques that use pressure and restrictive gear. She’d come across positive reinforcement groups on the internet and thought that perhaps that was how she should proceed with Fawn. But, intuitively Susannah knew that transferring those ideas to real life required some skills that she didn’t have. I’ve seen many situations where well-meaning people compound behavior issues with the clicker. Karen Pryor and I have discussed this. In a conversation in March she said, If you don’t have timing and observation skills, put the clicker away. That doesn’t mean that you put the concepts of this training away. You still define your goals, break them down into doable bits and reward each baby step to success. You can get great results, and a calmer and less frustrated horse, if you save the clicker for precision behaviors, not general handling.

Susannah called me in for a consult last December. Noticing details is one of the skills that I bring to a training session. I saw that Fawn moved off only when the halter was on the side of the person nearest to her. That’s important information.

Once you isolate a specific moment, you can address it quickly and effectively. I had Susannah do a number of things. I had her stand in the field near Fawn, but ignoring her, while she shifted the halter from shoulder to shoulder, until Fawn no longer saw that action as a predictor of being caught. I had Susannah walk up to her horse, feed her a handful of hay pellets and then walk away, so that an approaching person predicted something good. Then we did that with the halter on Susannah’s shoulder. Then Susannah jiggled the halter while approaching Fawn. Fawn learned that good things happened when she stood still when her person approached, even if her person had a halter.

Although Fawn had been through a lot in her life, she wasn’t fearful, nor disobedient. Rather, the mare was thoughtful and observant. I don’t think that anyone had bothered to teach Fawn catching or handling behavior, they expected her to just do it. It’s no surprise that Fawn had figured out a behavior (walking away from humans) that worked for her but not her owners. Now it was Susannah’s job to explain to Fawn what to do in a clear, consistent and rewarding way. I was sure that once Fawn had such direction, that she would be happy to comply.

Susannah and Fawn had a busy winter into summer. They moved barns. Susannah found a veterinarian who could address her horse’s back pain. Fawn was treated for Lyme disease. So, it wasn’t until last week that I was able to see them again.

Look at the difference! Here’s a mare that looks forward to interacting with her person.

Susannah is ready to start under-saddle work with Fawn. Susannah reported that Fawn was having issues with the saddle pad. In another post, I’ll show you how we are changing Fawn’s perspective on that gear, too. 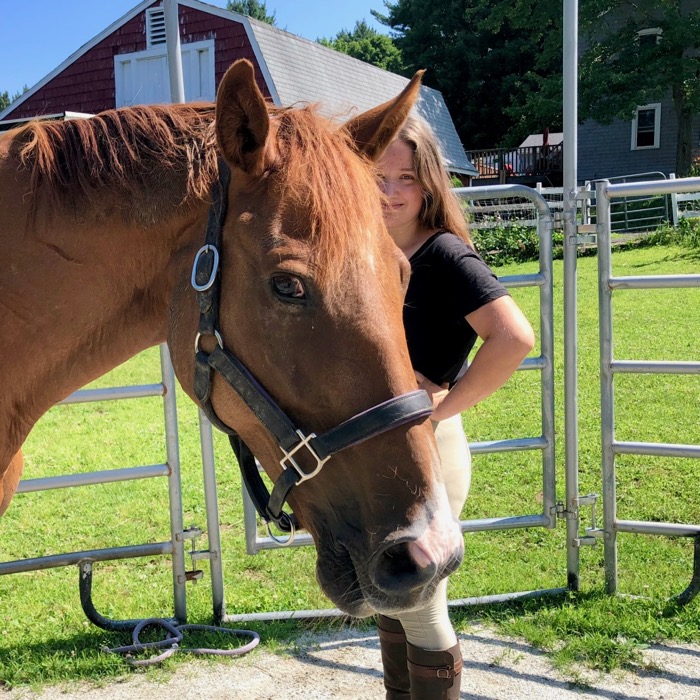