Like you, a horse will get uncomfortable, and even walk funny, if they need to pee and have to hold it in. Unlike you, horses are not taught where to go. Eventually, they’ll stop and let it pour wherever they are. But, people do get mad at them if they go in certain places, like indoor arenas with specialized footing. 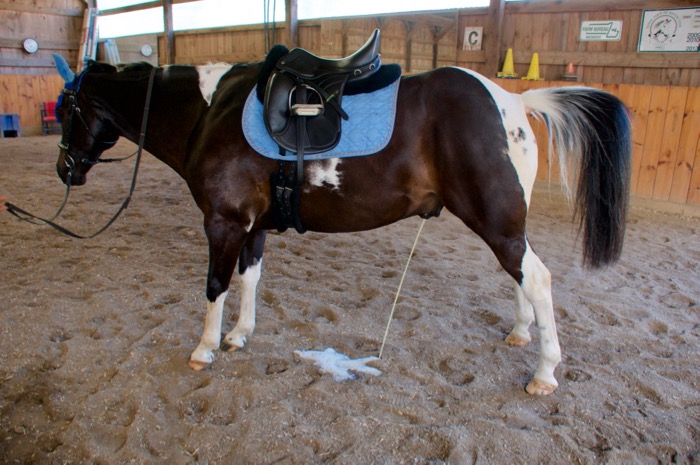 I thought it’d be useful to teach Tonka to pee when and where I wanted him to. Then, I could have him go before he entered the arena. Also, I don’t want my horse to pee in the trailer. Could I teach him to go before we headed out on the road?

It turned out that I could teach my horse to pee on cue.

If you want to do this, start with a horse that already understands a marker signal (I say a clear and quick “dee!” but use what works for you.) The marker (sometimes called a clicker) lets the animal know the moment that they’ve done something that the trainer wants them to do, and that a reward is imminent. If they know the rules to this game, then you have a way to communicate complex ideas to the horse.

This behavior will take time to teach, simply because it doesn’t happen very often. You can’t lure a horse to pee, or force it to pee. You have to wait until they do it. When it does, 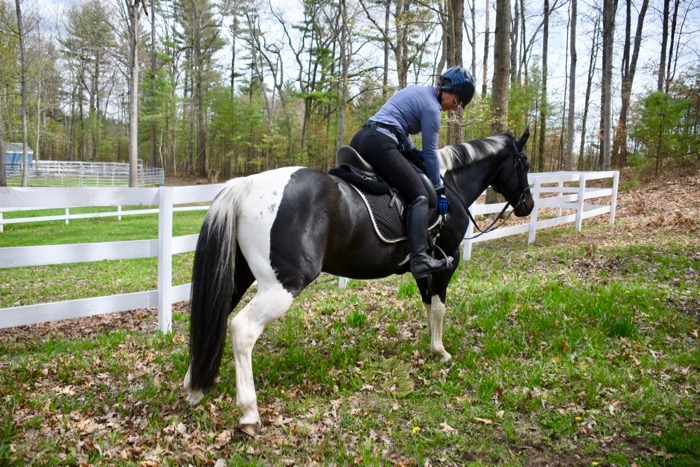 say Yay! with the marker, and hand over the peppermint (or whatever your horse thinks is particularly special.) 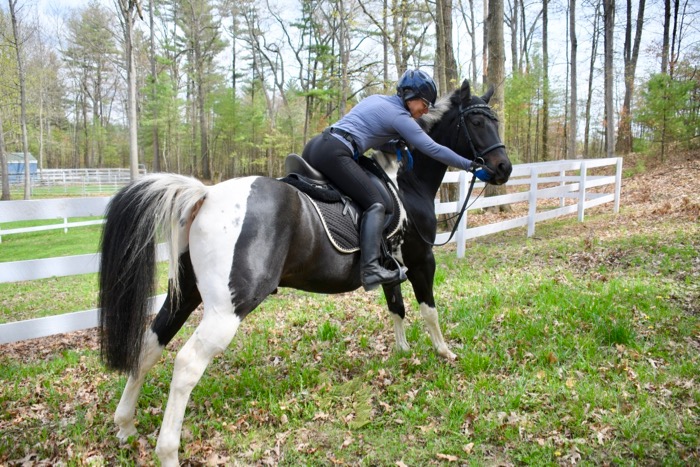 Do this a few times until you notice that your horse anticipates a reward after they pee. Then it’s time to add the cue. This is called stimulus control. You want the horse to pee when you ask for it and ONLY when you ask for it.

You don’t want the horse to stop and pee, hoping for a cookie (a particularly bad idea when in the show ring.) You don’t want the horse to pee as soon as they see you, in the hopes of eliciting a peppermint. Trust me on this – that sort of enthusiastic letting it pour will happen sooner than you think. I know, because I also taught my goats to pee on cue. Every morning, I’d arrive at the barn to let them out of their stall, and while I was unlatching doors, they’d pee in their clean bedding. I thought, why can’t they wait until they go out? I’ll teach them to pee outside. Very clever, right? Well, goats are quick learners, and within the first week, they decided good things happened if they peed when they saw me, so that every time I appeared, they’d look at me and cheerfully pee. I admit that it was rather funny, but I put a stop to it. I did that by giving them a cue (the word “tinkle”) and only rewarded them when they peed after hearing that word. (Not as easy to do as I’ve just written!) 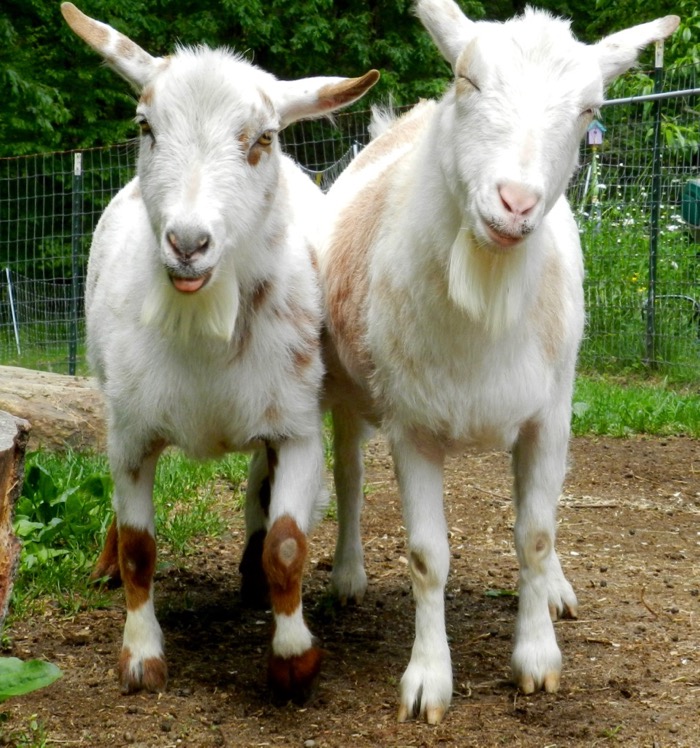 After the goat fiasco, I was determined to put Tonka’s peeing on cue as early in the training process as possible. I decided that the cue would be both tactile and verbal (Karen Pryor suggested this to me) – the word “tinkle,” and two fingers pressed onto Tonka’s shoulder. The first step to putting peeing on cue was to get him to associate this cue with the peeing. If I lucked into seeing him pee, I’d give him the cue while he was urinating. I’d mark when he was done and give him a peppermint. Then, I incrementally did this cue earlier and earlier in the behavior, until I was cuing as Tonka was about to pee (it was easy to know when because horses stretch out.) He was rewarded with a cookie each time.

This training took awhile, because of course it could only happen when he was peeing.  There were some weeks that I never saw him pee, so couldn’t train it. But, I hit on a way that sped up the process. Tonka likes to pee on soft ground, so I used that to my advantage. He didn’t like to pee in his paddock, so at the end of the day, if I led him from there to a place that suited him, he’d often go. Soon, I had the cue linked with the behavior, and then I could get him to pee when asked.

But, like with the goats, there were unintended side-effects.

A typical problem with training is that we fail to realize that the animals are noticing contextual cues that we humans are oblivious to.  With Tonka, I had limited places to ask him to pee before going into the arena, so I had him go in the same place. Soon enough, I realized that my cue didn’t matter – he’d lead me over to that one spot and pee! This was a problem because too much pee in one place, day after day, isn’t a good thing. 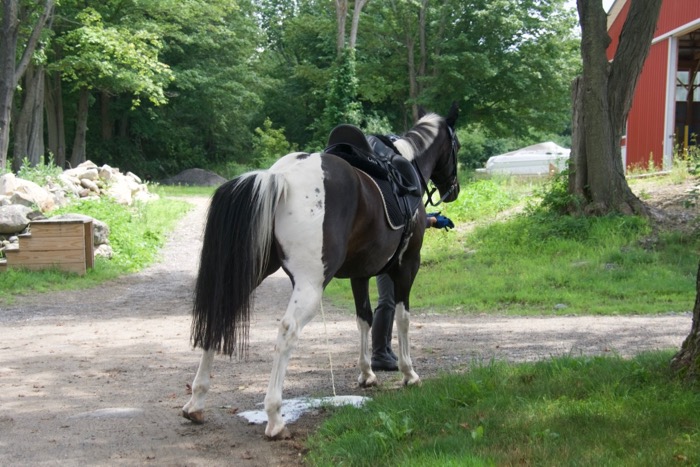 I’ve stopped asking Tonka to pee before I ride, because leading him in tack to the arena had become a contextual cue to pee. It got to the point where he wanted to do it every time, and there wasn’t an appropriate place. Once I broke that link between leaving the barn when wearing his saddle, and getting to pee for a cookie, he stopped needing to go as much. There are times when I get on that I can tell he really and truly has to go, so I get off and lead him out of the arena to a section of gravel on the far side of the ring. But, I think we’ve done that too many times, because he’s starting to head over there on his own.

On the plus side, Tonka has learned that he’s a lot more comfortable if he has an empty bladder when ridden. He often pees as we get started on a trail ride. After peeing, he doesn’t swing his head and look at me for a cookie; the act itself seems satisfying to him.

By doing this training I’ve made peeing possibly too rewarding for Tonka. Other horses don’t seem to need to urinate as much as my horse…

In conclusion, you can teach your horse to pee on cue, but it might not be the best idea!

Here’s a video for you. Tonka did not need to pee, and you can see him questioning me if I’m serious. I don’t think it’s fair to ask him to urinate when he doesn’t have to (if you’ve ever been at a doctor’s office and told to pee into a cup when you don’t have to go, you know what I’m talking about), but I did it this time so that I could take the video.

Have you taught your horse anything that’s had unexpected consequences?

9 thoughts on “Teaching A Horse To Pee On Cue”