Tonka grew up on a ranch in Texas, where he learned to navigate open spaces, trust his companions, be alert for danger, and learn from his experiences. This upbringing is one reason why he has such an intelligent eye. I continue to encourage him to be thoughtful. When he is alarmed, I project calm and let him suss out the situation. Usually, once Tonka understands what’s causing the noise (or smell, or other sensation), he gets that it’s not dangerous and we continue on. Sometimes his assessment is Let’s get out of here. He’s almost always right about that. We’ve come across a recent deer kill, a ground wasp nest, and someone using a chainsaw in the woods. If it’s a bad idea to keep going, we turn around. Because my horse trusts that I won’t force him to do something dangerous, Tonka can usually keep his wits about him. We don’t leave in a panic, but there are times that we do leave!

All of this is background for something that has puzzled me for the last month. There’s a pond at his farm. It’s a peaceful, pretty place. We walk by it every day to get to the indoor. All sorts of animals live there or make use of it. Tonka isn’t afraid of any of them. Great Blue Herons, muskrats, deer, ducks, turtles. Bobcat, fox, coyotes. 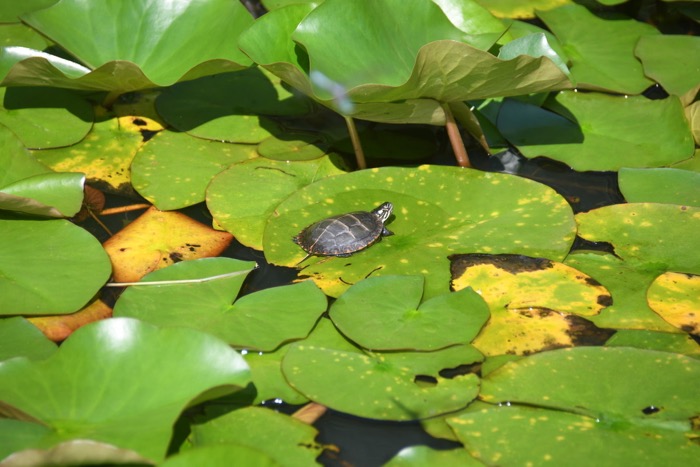 About a month ago, we were riding outside in the sand arena, which is near the barn, on a rise above the pond, and Tonka took fright and spooked halfway across the ring. I stopped him and he stood, all tense and blowing, staring hard at the pond. I didn’t see a thing. Since then, he hasn’t made a dash for it again, but he does look. Sometimes he alerts to something at the pond from rather far away. 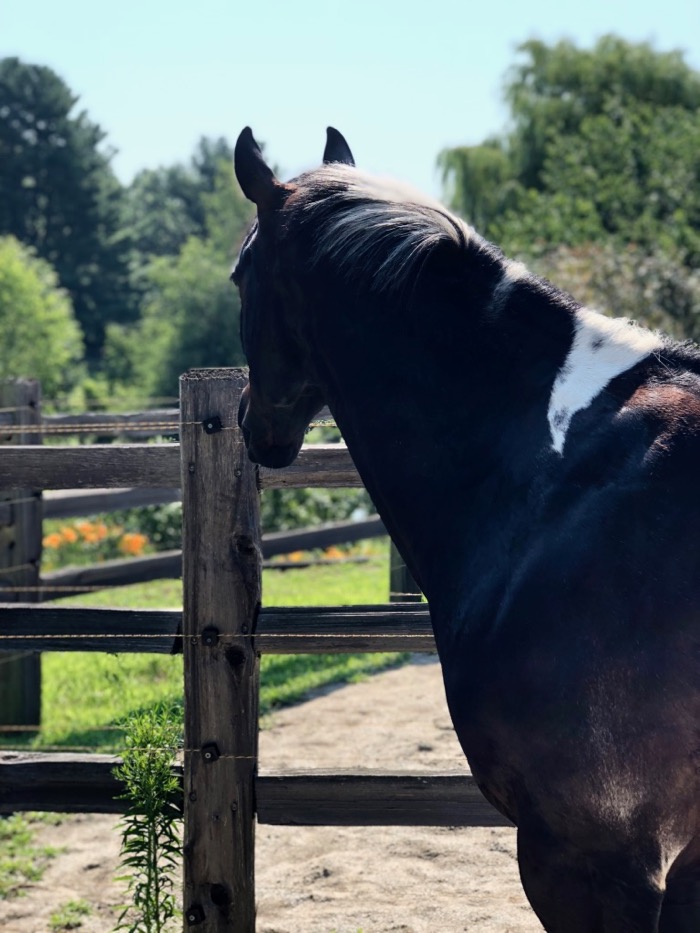 Certainly, there’s nothing dangerous in that pond. It doesn’t meet the criteria of a place that we avoid. Anyway we can’t. I’ve tried to hand-graze near it, but at a certain point, my horse gets tense. I don’t force him past that. We stay below threshold and ponder the mysteries of that body of water. 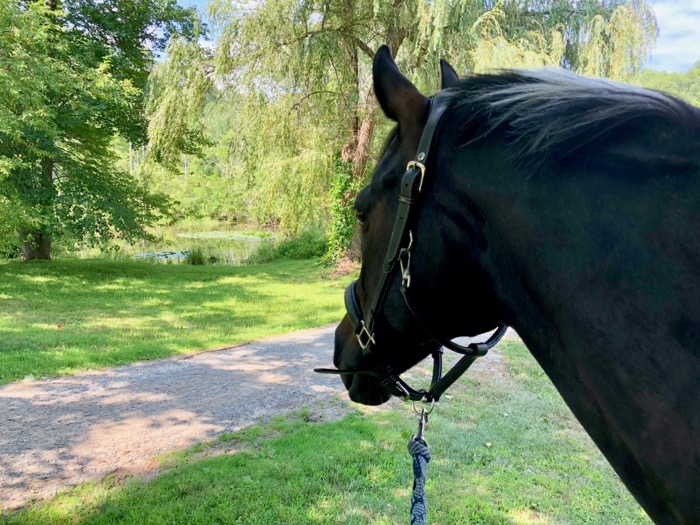 Steve came by the barn the other day with his camera. He was hoping to see the Green Heron that is sometimes about. He didn’t see that, but I think that he did solve the mystery. 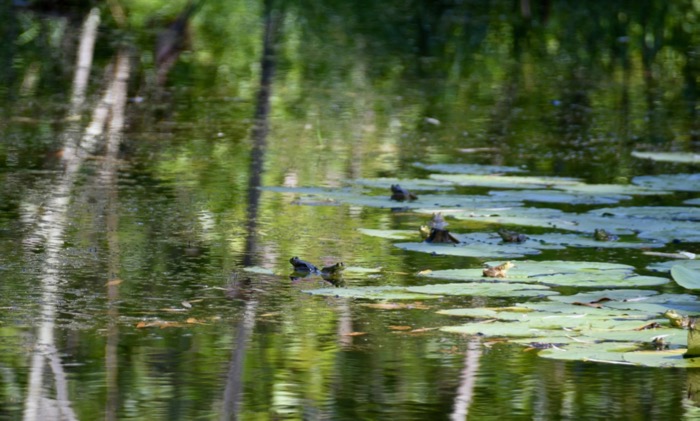 As you can imagine, with all of the predators about (herons eat frogs), the frogs that live in this pond are very skittish. 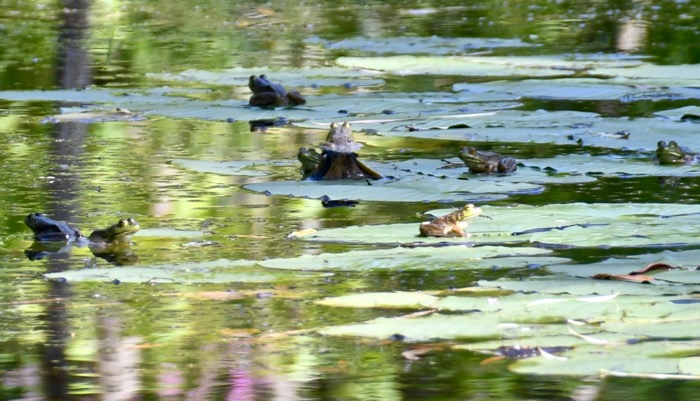 Go near the edge and they say peep peep then plop! into the water. My hearing isn’t good enough to hear that peep, nor the plop, but Tonka’s is.

There’s no such thing as a bombproof horse, but when I first got Tonka, he sure seemed close. I got him in the winter and he was a Steady Eddie. Then, that spring, we were walking down a wooded trail and came to wetlands. All of a sudden, Tonka started backing up. He would have backed us over a cliff. As it was, he backed through saplings and was stopped by a stone wall. What the?

He’d spooked at one frog, plopping into the pond. I’d thought that once he understood what made the noise and the sudden splash, that he’d stop worrying about it, but Tonka continues to be wary at all wetlands.

Since the first spook at a frog, I’ve worked with Tonka so that he has an alternative to that dangerous backing up when he is scared of something, so we can walk past the pond at his barn – in high alert – but he doesn’t go into reverse!

It interests me that Tonka isn’t afraid of much of anything, but these little green harmless animals do scare him. Then again, maybe it’s not exactly the frogs. Perhaps Tonka understands that the frogs are frightened of something, and he wants to know what it is. Many animals rely on the alarm calls of other species to stay safe. 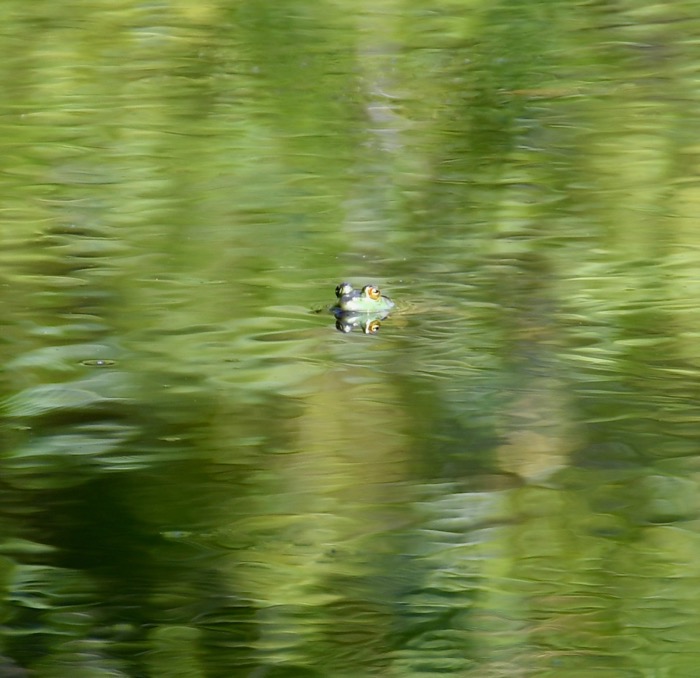 Then again, maybe Tonka just doesn’t like the plop!