Now that Lily’s gone, Scooter is finding his new normal. His job for ten years was to be Lily’s sidekick. Follow her around. Distract her when she got too serious. Observe her brilliance.

Not everything has changed. Scooter continues to indulge in his favorite pastime. Naps. 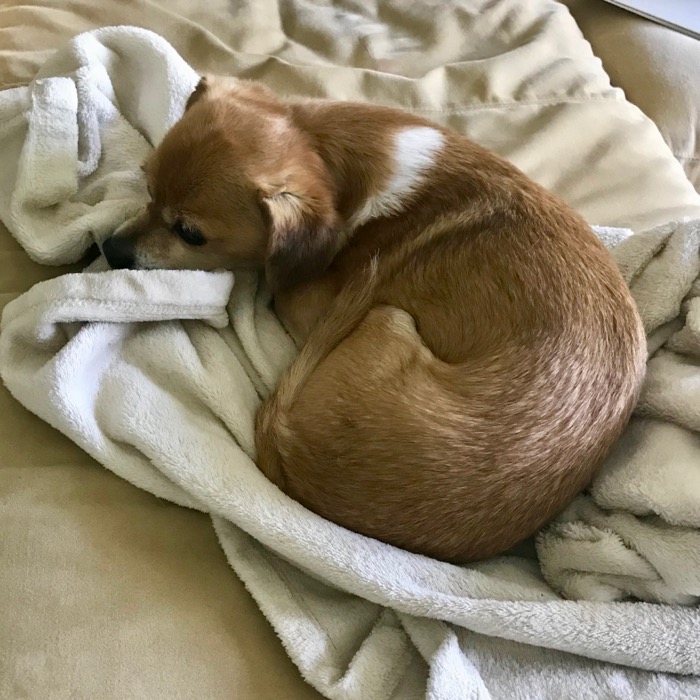 But I know that he’s feeling out-of-sorts. Scooter is eating, but less than he normally does – and that isn’t much. I’ve added a little beef gravy to his kibble to stimulate the appetite.

The big tell that Scooter is missing Lily is that he’s been yowling. He’s never barked, but on occasion, he yowls when he feels left out. Here’s a video from years ago of Scooter yowling because I took Lily for a walk without him. For this last week, that yowl is what greets me when I come home. He hears my garage door go up, and he starts.

I think Scooter has decided that he’s now my sidekick, which must frustrate him, as I’m often away from home. I needed to figure out a way for him to spend more time with me, so last week I took Scooter to Tonka’s barn.

He settled into his booster seat. 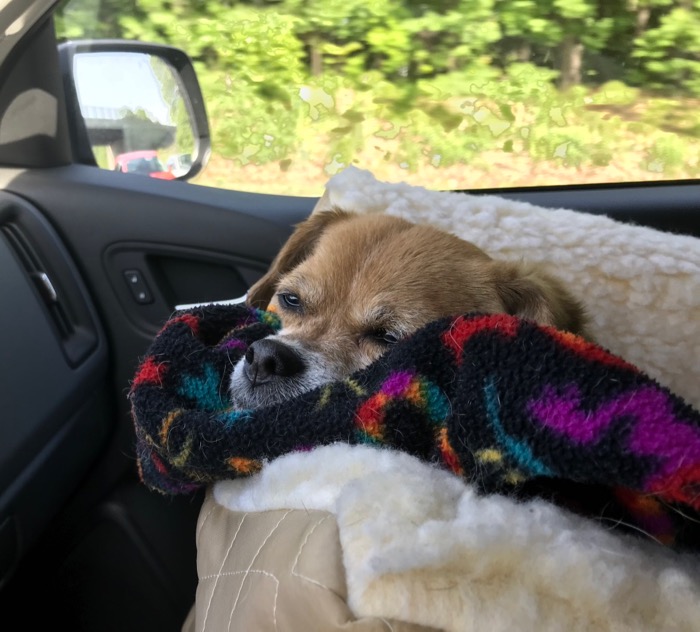 He was greeted by the resident farm dogs. Nose to tail is the polite way to do it. These are well-socialized dogs. 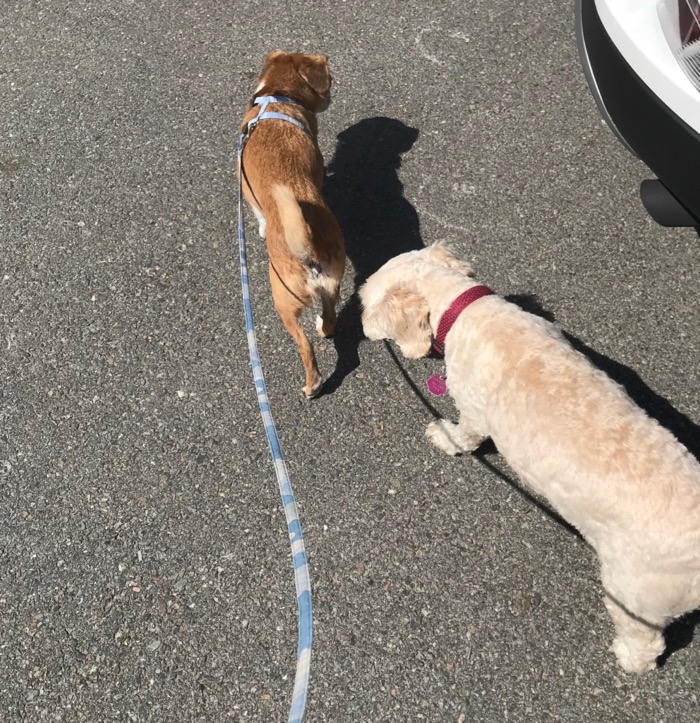 We went for a walk. 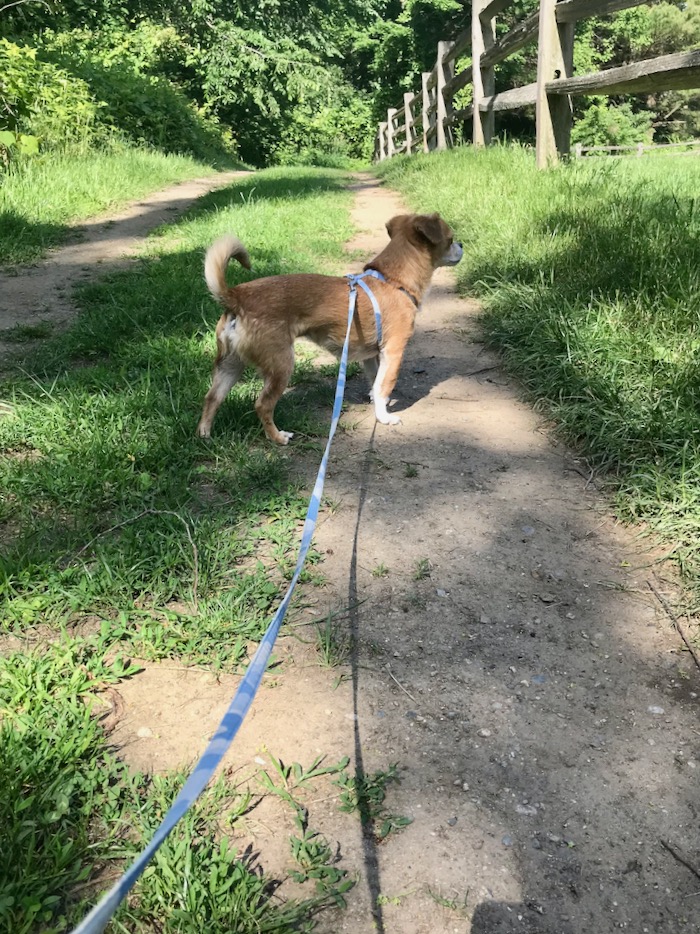 We gazed at the horses from afar. 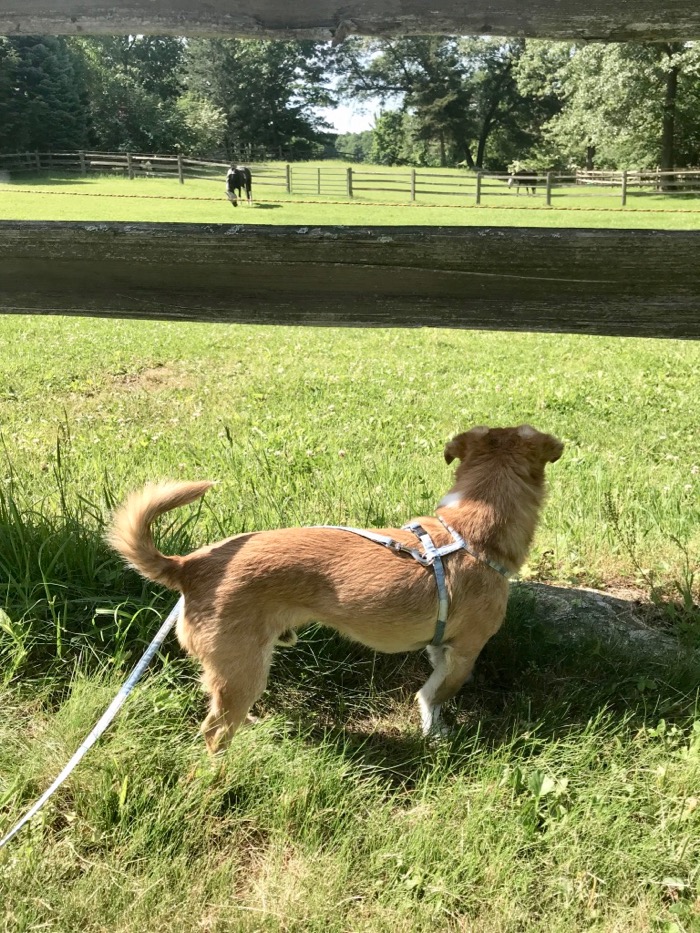 We sat in the barn aisle and watched the activity. 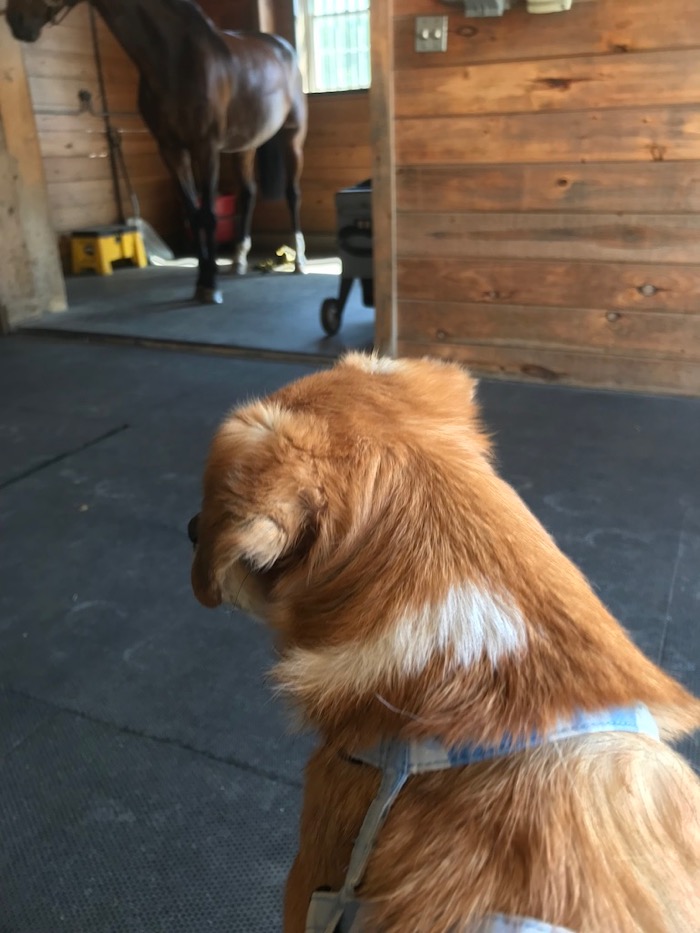 Scooter is a little dog that tends to being shivery when scared or over-excited. He didn’t tremble. A very good sign.

The outing was so successful that we went a second time. I brought him over to Tonka to say hello. Tonka only tolerates dogs. 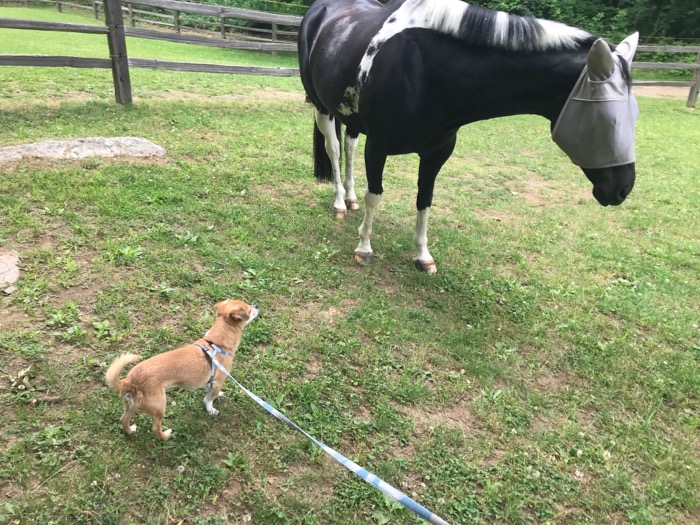 They eyeballed each other, and then each went back to something more interesting. Tonka to grazing, and Scooter to discovering the joys of old horse manure. 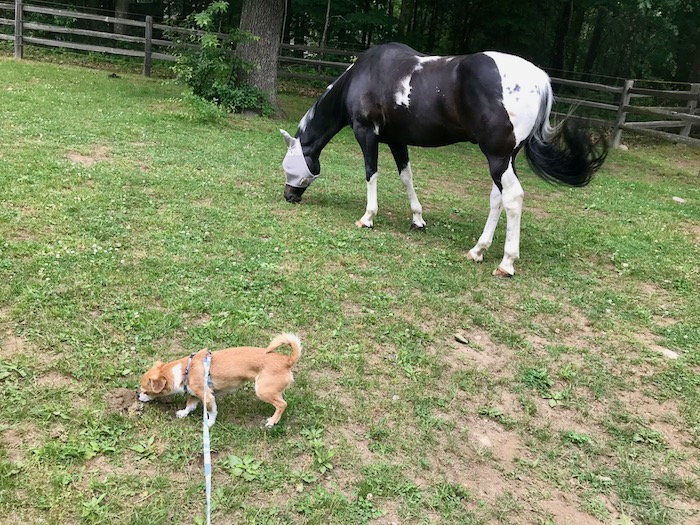 Scooter did have a content look on his face on the drive home. 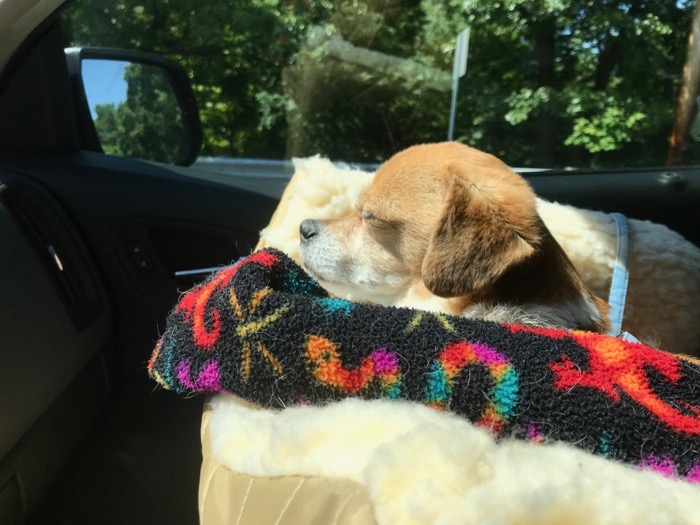 We’ll continue to do these short jaunts together. But, he’s not a dog that can keep me company on a daily basis. It’s too hot to leave Scooter in the truck, and he’s not savvy enough to be left at the barn while I ride. Also, because of those funny bow legs, he tires easily. He’s not one for long hikes. I think, though, that an occasional excursion is just what the little dog needs.

One of the things that domesticated species have in common (and a reason why these, of all of the animals, became domesticated) is that they are social beings that form close bonds with both members of their own species and also with us. The attachments they form are based in the same pathways of the brain, and use the same chemicals, that we humans have that allow us to love and feel loss. I can’t read my dog’s mind, and I know that his thought processes are different than mine, but I can carefully observe his behavior and try to ease his transition to his life without Lily. Most of the time Scooter behaves like he always has. I’m optimistic that Scooter will be fine.

(Know your animal! This is a happy Scooter face. Really! Not only does he often look “sad” but he has a wandering eye so his whites show. He’s not worried here.) 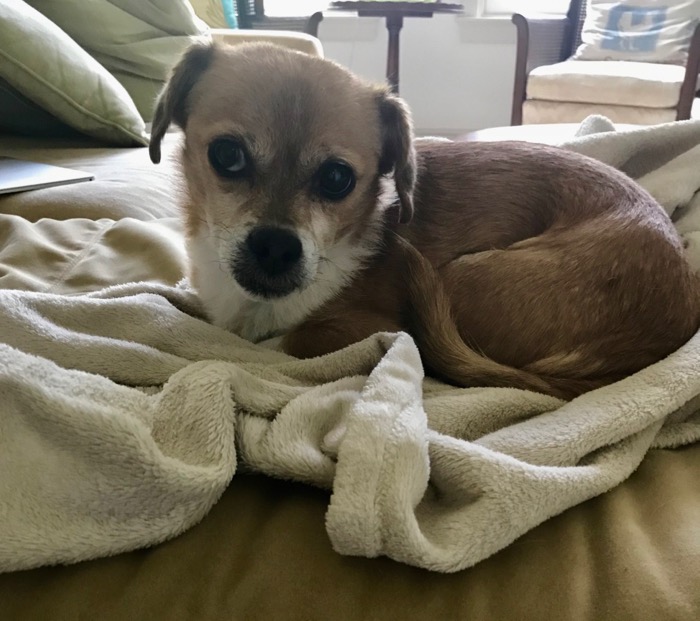 The stress of loss, a change of dynamics, and possibly grief, happens with horses, too. I have a client with two horses. They live in her backyard barn. They’ve been together since weanlings and are now twelve years old. One of the horses is relaxed about leaving the property, but the other panics and body slams her stall if the other steps out of sight. This behavior became noticeable after their herd mate, an older thoroughbred gelding, died. He’d been the steadying influence on them when young, and he was the horse that they looked to for confidence and security. After the thoroughbred passed away, the owner got a mini horse, knowing that three would be better than two. But they ignored the mini. He wasn’t their old friend. On my first visit, I evaluated their threshold – the point at which they changed from relaxed to stressed. I observed their relationship with their owner (excellent!) and each other. I came up with a plan that hopefully will stretch that threshold so that these two friends are able to be handled and ridden separately. I can’t bring back the old thoroughbred, but we can change the dynamics so that some of the confidence that he imparted to them can now come from the owner. It’ll take time. But loss is like that. 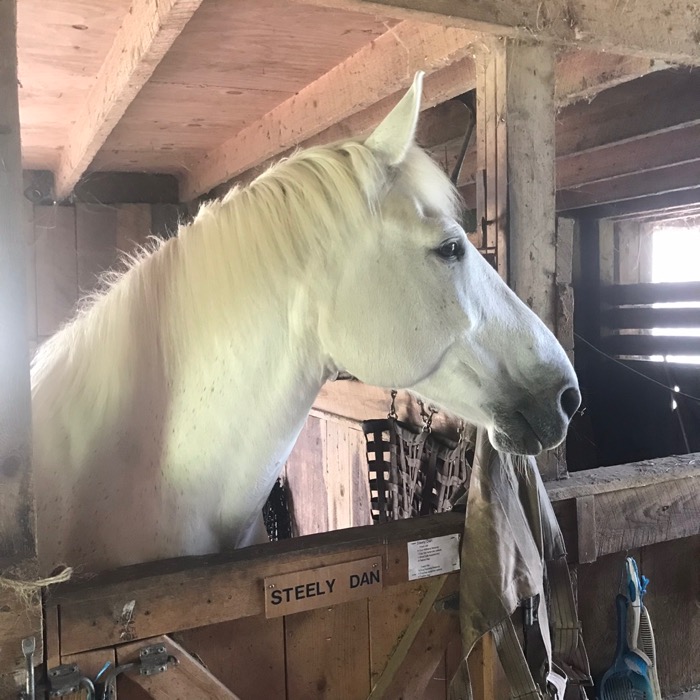