Which do you think is scarier to my horse? 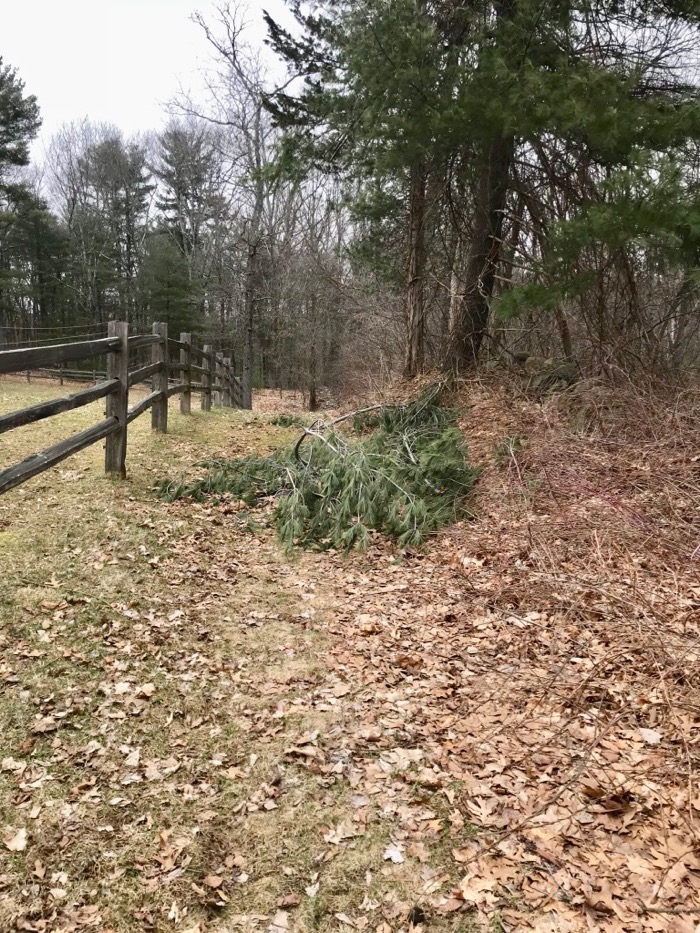 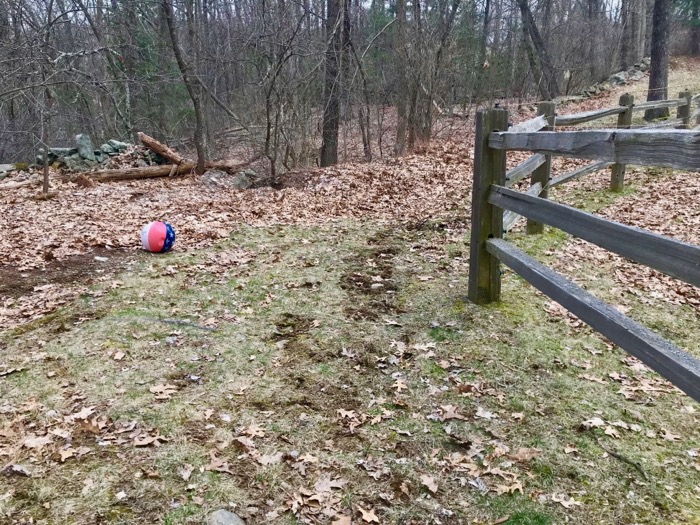 The answer is the branch!

Although Tonka has settled calmly into his new home, 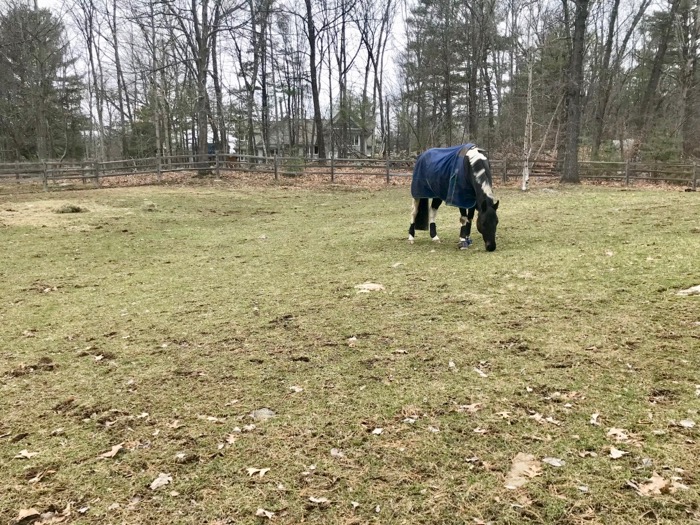 and has seen that downed pine bough every day since he’s arrived, when I tried to ride past it, Tonka deemed it something to be wary of. He slowed down. He stopped. No big drama, but Tonka was clearly concerned.

The trail to the woods goes alongside Tonka’s paddock. This branch was in the way. It’s a familiar object that posed no threat. I don’t know why Tonka was worried, but I have some ideas. It has to do with how horses see. Horses have the largest eyes of any land mammal. 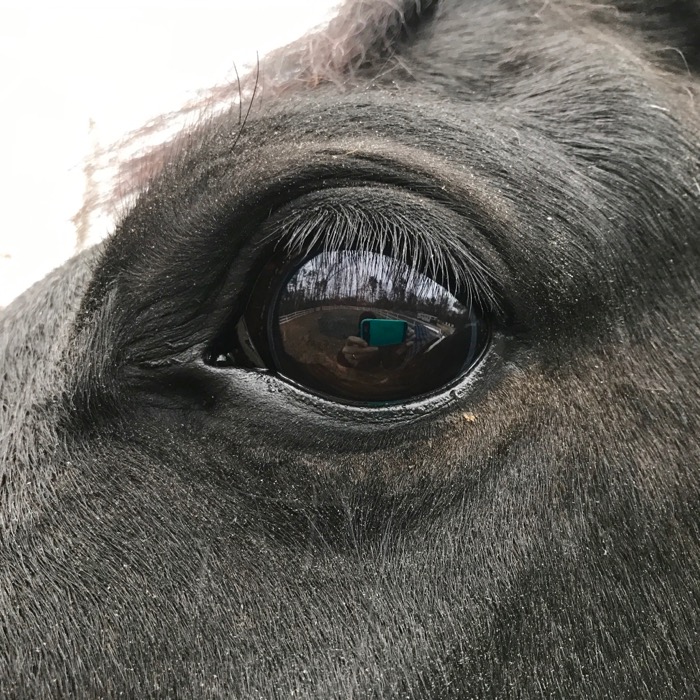 You know the difference between the panorama (pano) and the square settings on your phone camera? Horses see the world in pano. We see it in square. They can see detail at distance, but can’t focus on things close up. They’re partially color blind – they can see what we call yellows, blues and grays. Although some horses can perform what look like color discrimination tests, it’s likely that they’re detecting brightness and luminescence, not color. So, what I see as green foliage is not-so-distinct mottled shades of grey to Tonka. Also, it takes a horse’s eyes longer than ours to adjust from sunlight to dark, and there was deep shade to the right. With pano vision, that shady area was as important to him as what was right in front of us. Or, it might have been difficult for Tonka to discern whether the footing under the branch was safe. Or maybe it wasn’t how he viewed it per se, but that just as we were getting near it, smoke from the neighbor’s burning brush pile wafted over, which made Tonka more cautious overall.

In any event, when faced with such an obstacle on the trail, I let my horse look. I don’t discount his worries. I’m glad for his input. I like a thinking horse who wants to keep us both safe. I let Tonka know by my body language (he can feel where my eyes are), that I’m giving it a good once over, too. Then I let him know that I’ve decided that it’s okay and we can get going. I sit plumb, look right past the branch, and give him a squeeze with my calves. It’s his tactile cue to move on. In this case, he kept his hooves planted, still doubtful that navigating over the pine bough was a good idea. So, I thumped his sides with the flat of my legs, sort of an I’m serious, it’s fine! I could practically hear him say, Okay, okay, I’ll go if you say so, as he carefully stepped over it. (If he had continued to balk, or act fearfully, I would have gotten off and led him over. Horses are often braver when their person is next to them, not on them.)

Not much further down the trail, we saw a beach ball. Unlike a branch on the ground, a beach ball is totally out of place, and yet Tonka barely glanced at it. Why was he so unconcerned?

I’ve noticed this before – Tonka is more alert to natural things that are not quite right, than to manmade objects that are out of place. Perhaps this is because we’ve done a lot of work getting him used to, and being rewarded for, interacting with unusual obstacles. 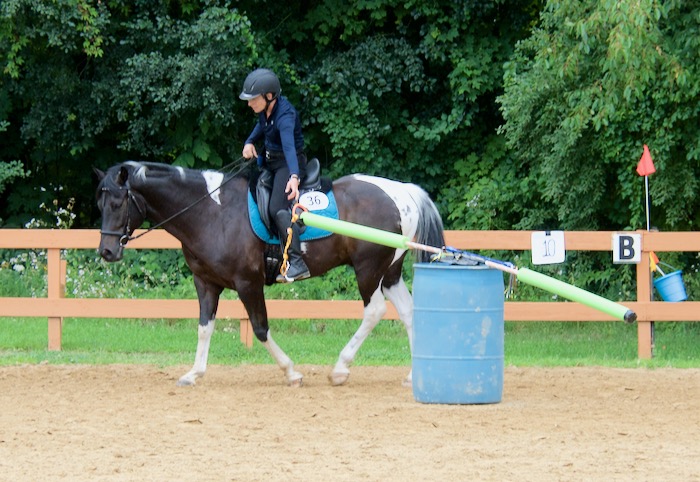 Perhaps it’s because Tonka knows that dangers lurk hidden in brush, but that beach balls and such have never jumped out at him.

In an event, we continued on, walked over downed tree trunks on a trail, had a nice explore at the bottom of a small field, got to a road, turned around and headed home. On the way back, Tonka didn’t glance twice at the beach ball or eyeball the branch. He was 100% relaxed the whole way home.

What does your horse spook at? What do they not spook at that you were sure they would?

Note: information about horse eyesight and other senses can be found in detail in Equine Behavior: A Guide for Veterinarians and Equine Scientists.