Tonka and I haven’t been off-farm in months. It’s winter in New England. The footing has been treacherous. On top of that, after cascading health issues, I’m carefully bringing him back into shape. But when it’s 60° F in February, and there’s only a few patches of snow left on the ground, you go!

I double-checked the trailer and it was sound for hauling. I was delighted that Tonka loaded right in. I had thought that since he’d been to the vet hospital twice this last year, that he might hesitate. But he must have been as eager to do something different as I was. 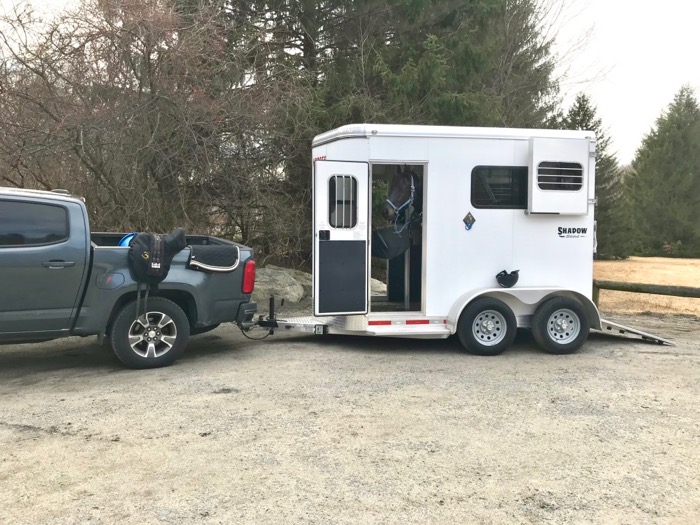 We trailered to conservation land about ten minutes from the barn. This was a new place for us to explore. I’d checked it out on foot the day before, and had scouted out which trails were dry and good for riding. There was even a field for Tonka to graze in! 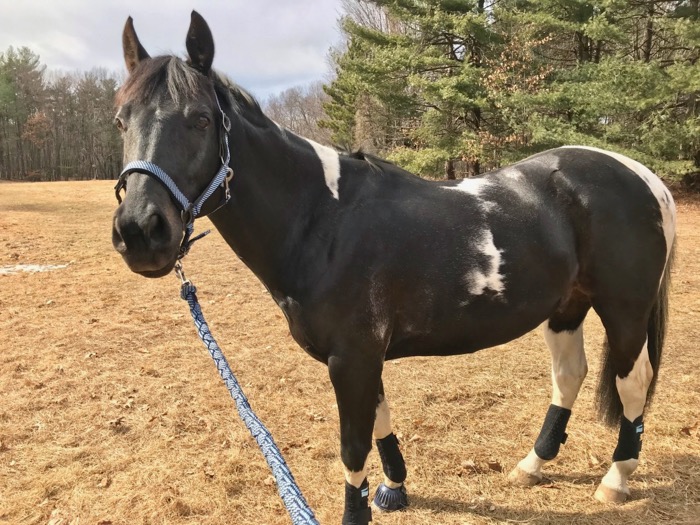 That was the first disappointment. These are popular dog walking trails, and it turns out that not everyone picks up after their pooches. There were piles. Tonka said it smelled disgusting and to forget that and let’s move along. 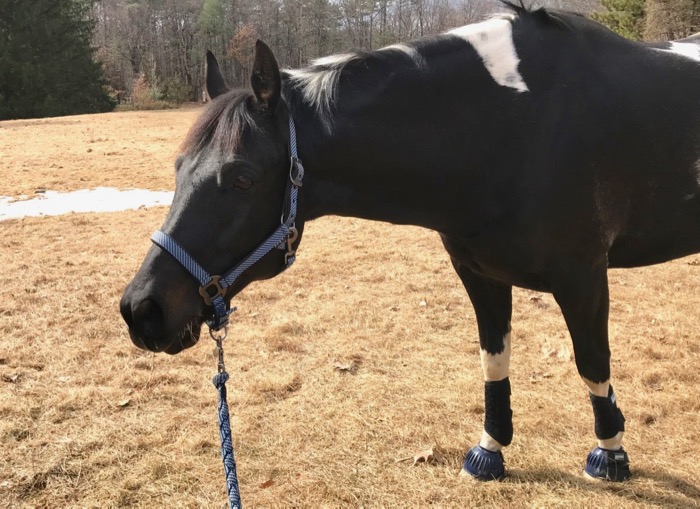 I tacked up and got on. Not every horse would be sane enough to do this – after a long winter in one place, to leave the home barn and friends, and head out into the unknown. Especially not when there were plenty of leashed and not-leashed dogs on the trails. (See his one ear twisted back? He’s checking in with me that I’m good with this. There’s trust involved.) 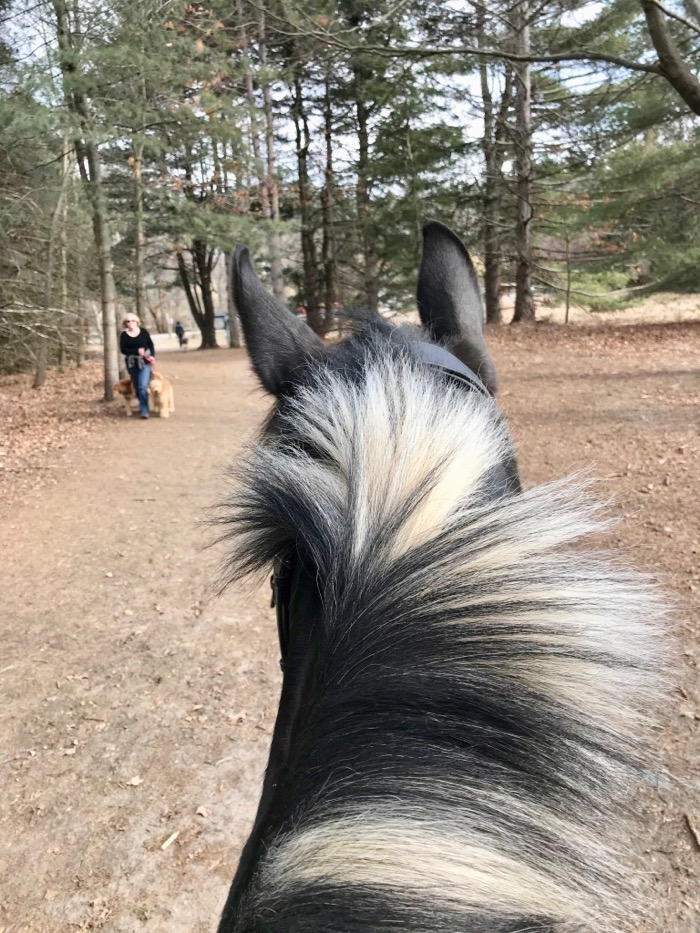 I let Tonka set the pace – at the walk. I kept him in a training level dressage frame so that his neck would be stable and he wouldn’t strain his back. There were hills. The path wound around a pond. He’s afraid of frogs that plop (every horse has their quirks!) Although it’s too early for frogs, Tonka didn’t know that, so he was on alert.

It was quite the brisk walk. When given his druthers, he usually ambles slowly along, so I stayed tuned into him. No daydreaming for me while I could feel him bubbling underneath me. It’s important, when a horse goes like this, that the rider relaxes, and so I did. Calm breaths. If you tighten and pull back in anticipation, you make the horse even more tense. But, you still have to be proactive and ready. Tonka had one big spook and then settled a bit. We came to a field and I thought that a little trot would be good, perhaps work off a bit of his energy. Tonka thought that he’d rather burst into something less tame, and perhaps start that with a big agile cowpony buck first. He got one in, but I know that it’s hard for a horse to keep their hind legs off the ground when their nose is also in the air, and so I pulled his head up, which got all four hooves back on the trail, and I suggested that we continue at the walk. As soon as he took the first walk step, I eased the rein contact. He took another relaxed step and I gave him a mint. That’s all it took. Tonka understood that we were going to walk.

That was Tonka’s second disappointment. No gallop in the hay field.

After that enthusiastic moment, we continued on, with energy but without the sense of imminent explosion. After ten more minutes, I felt him truly relax. Tonka was still forward, but stretched across his topline which is exactly what he needs to become stronger! At this point we’d managed to go 2 miles in only 35 minutes, so I decided to call it a day. We made it safe and sound back to the trailer. There he enjoyed a quick brush off, and then loaded in with a satisfied look on his face. It was a good outing, even if there were a couple of disappointments.