I have had Tonka for four years. I am now on our fifth saddle.

I bought my first horse, a three-year old appaloosa gelding, back in 1976. He was untrained when I met him, and I backed him myself, using the barn’s tack. Later that year, on vacation in Scotland, I purchased an all-purpose saddle made by a saddler in the Highlands. I assumed it would fit The Kid, and it did. I then used that saddle on my next horse, who was a totally different build. She was a 17 hh thoroughbred. It fit her too. I used it on her for a few years, as well as on a number of other mounts. I still owned that saddle when I bought Tonka, and was honestly surprised that it didn’t fit him at all.

Among other issues, it was tight across his shoulders and pressed down on his withers. Maybe it did that to my previous horses and I didn’t know it? Saddle design and fit has become a lot more sophisticated in the years since I owned The Kid.

A saddle is really quite complex. The tree (the armature that gives the seat its structure and strength) can be made of various materials such as wood, metal, or composites. Each saddle maker has their own ideas about how a tree should sit on a horse’s back. Some trees are rigid, others flex, some dip, some are flat. Then there are the panels that pad the tree. There are as many shapes to those panels as there are brands of saddles. There’s also other features to consider, like the the gullet width (that’s the space over the spine) and where the billets attach.

I got Tonka to be my trail buddy, didn’t think I needed a fancy saddle, and so purchased a synthetic, used, trail saddle. After half a year, I was ready for an upgrade and got a used dressage saddle. That worked for another half-year, but Tonka gained muscles and it pinched his shoulders (it wasn’t a perfect fit to start with.) I tried another saddle. This one Tonka liked. He moved freely and happily when I rode him in it. But, saddles also have to fit the rider. It was too big for me, and the flaps were too long. I decided to splurge and order the same brand, an Amerigo, custom fit for both Tonka and I. The saddle was made in Italy.

It was the saddle of my dreams. 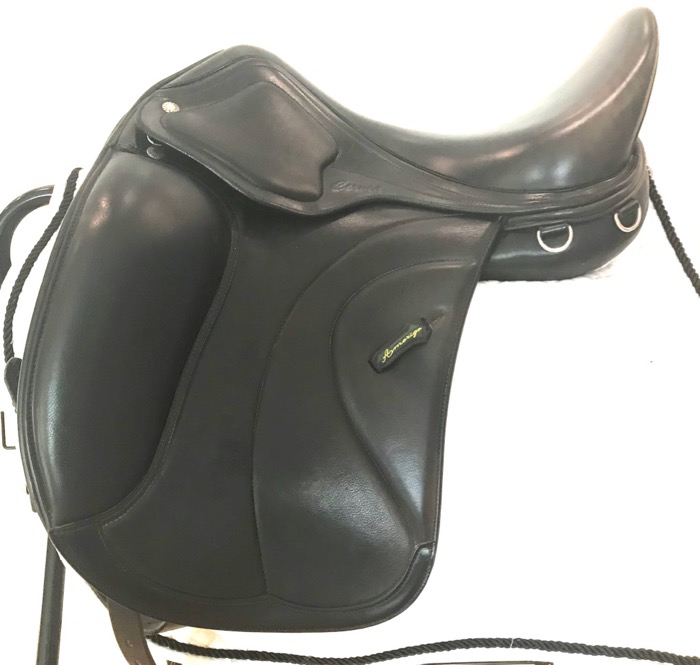 For a brief time, it seemed that Tonka also loved this saddle with it’s buttery-soft leather, but then something didn’t feel right. It wasn’t sitting in the same place as before. The balance was off. I had the saddle fitter out. (Yes, that is a profession, and a much-needed one!). It was adjusted. Tonka went well again. But then, something else didn’t feel quite right. It was subtle. Like the difference between this pleasant face: 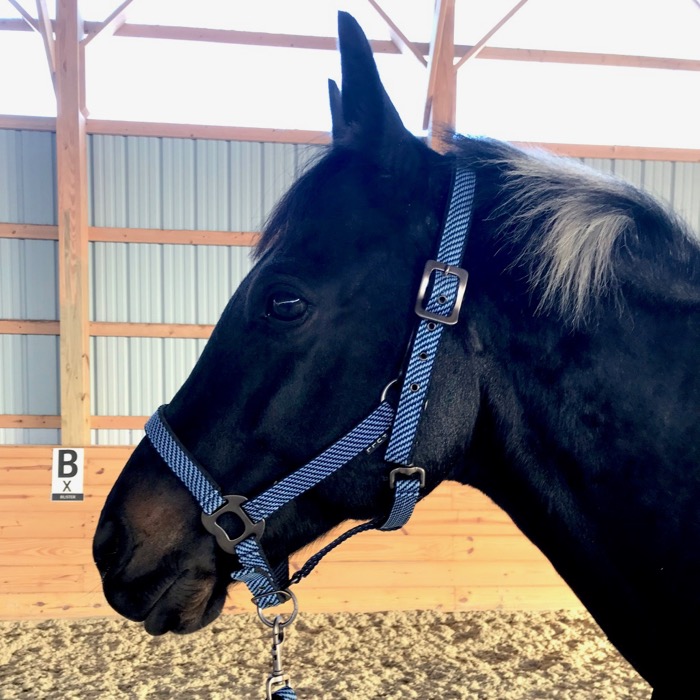 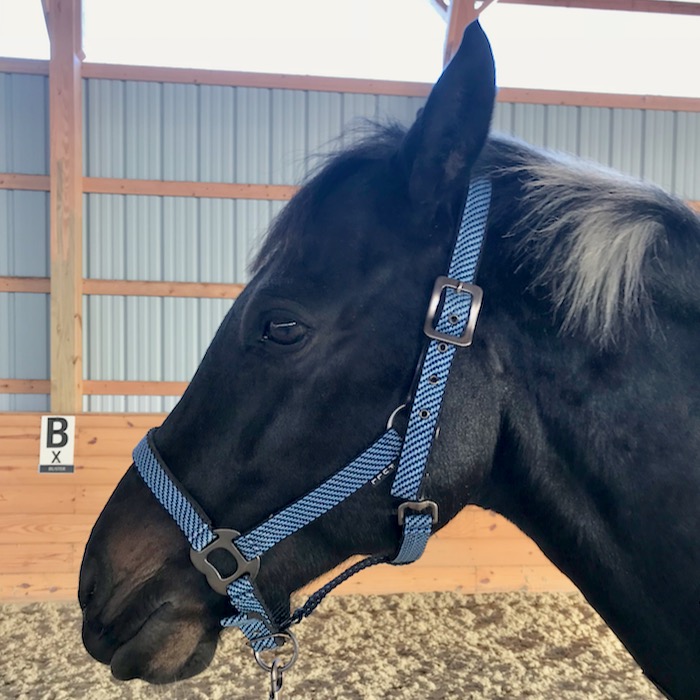 The saddle was adjusted again, and Tonka went fine. For awhile.

Then, this summer, Tonka got balky. The saddle fitter sent my dream saddle away to have the tree widened, and when it was returned, it once again fit perfectly. Tonka went beautifully for two weeks. Then he refused to move.

Tonka was looked at by veterinarians. He was diagnosed with a sacroiliac joint inflammation. He got injections in the affected area. Tonka should have been all better in three weeks. He wasn’t. He still refused to move. When he did acquiesce, my horse was clearly unhappy.

This behavior only happened when ridden. Led in-hand, Tonka moved out with no problem. Although the saddle fit, it was time to see if a different model would change how Tonka went.

I went to Pelham Saddlery. They have a large selection. Something there had to fit both Tonka and I! 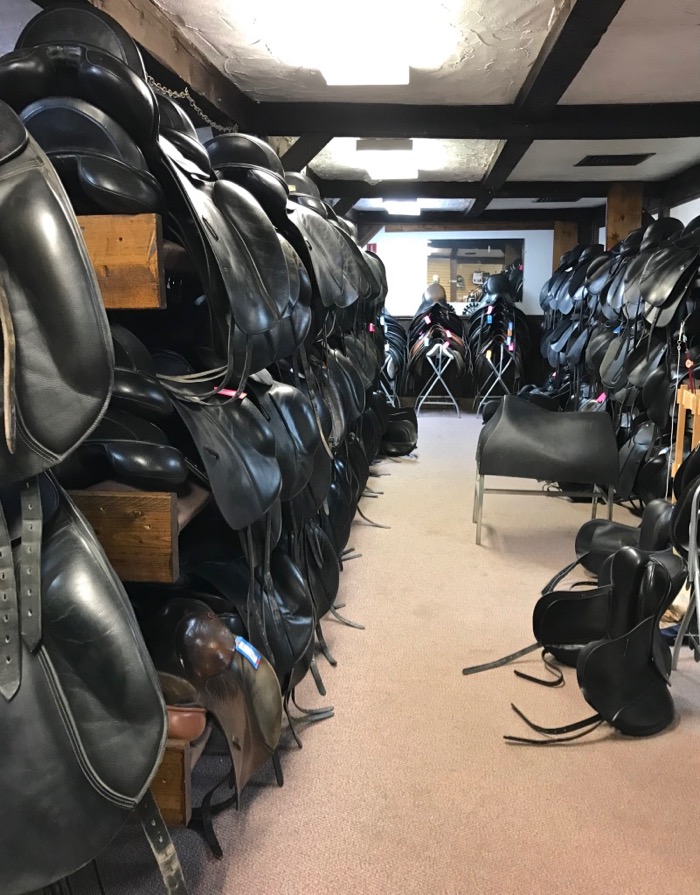 I worked with Janie, their saddle fitter. We discussed trees. 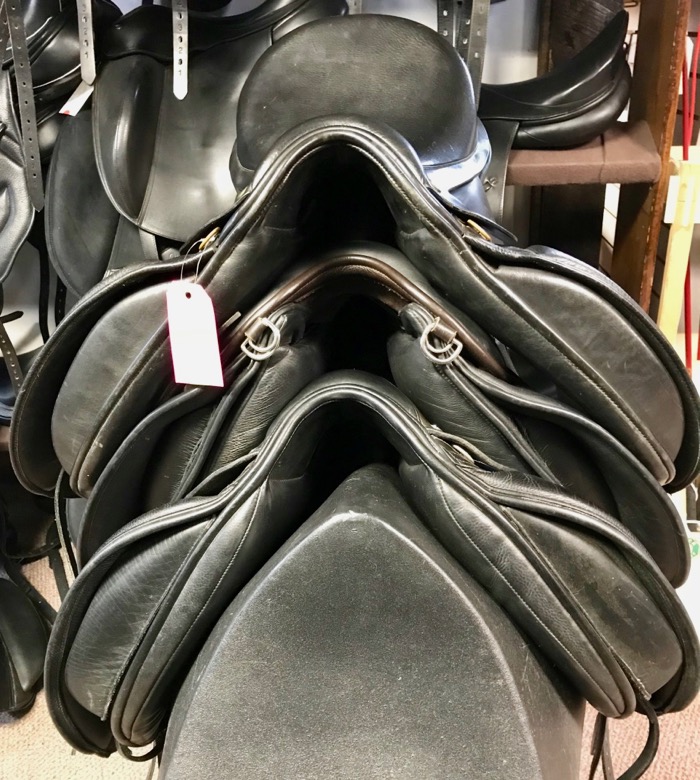 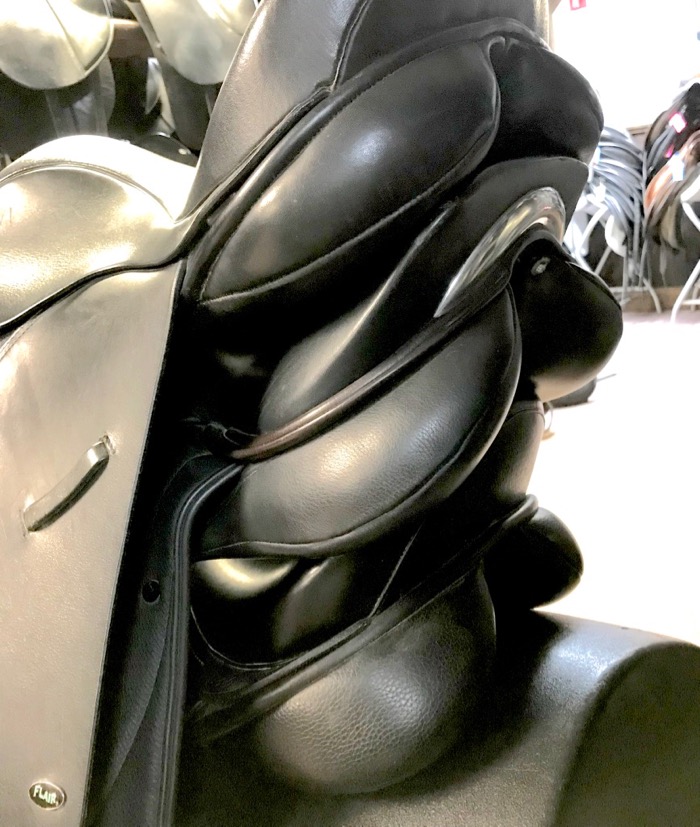 We discussed my horse’s shape – long, dipped back. And my shape – petite. I went home with several saddles. I tried them on Tonka. He did his best Goldilocks imitation.

This one is too loose.

This one is too tight.

None were just right.

Two of them he objected to so much that he wouldn’t let me get on. One he let me on but wouldn’t take a step.

Janie came out to look at them. She exchanged the not-quite-right saddles for a few more.

This saddle is too hard.

This one is too soft.

Finally after trying ten saddles, I tried one made in England by Adam Ellis.

Tonka stood happily at the mounting block and let me get on. 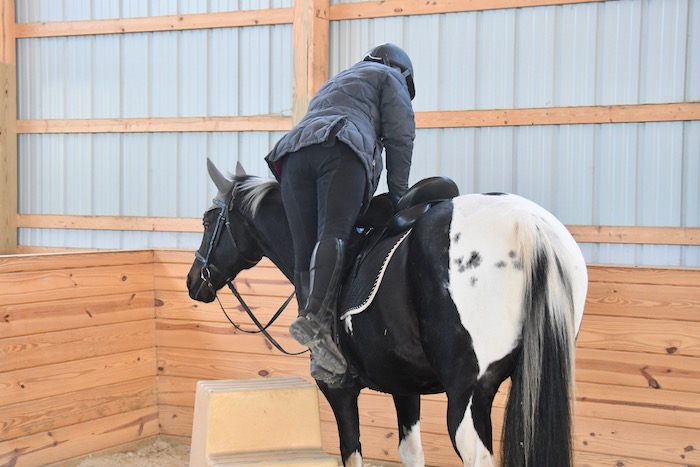 He happily walked off, no urging needed. 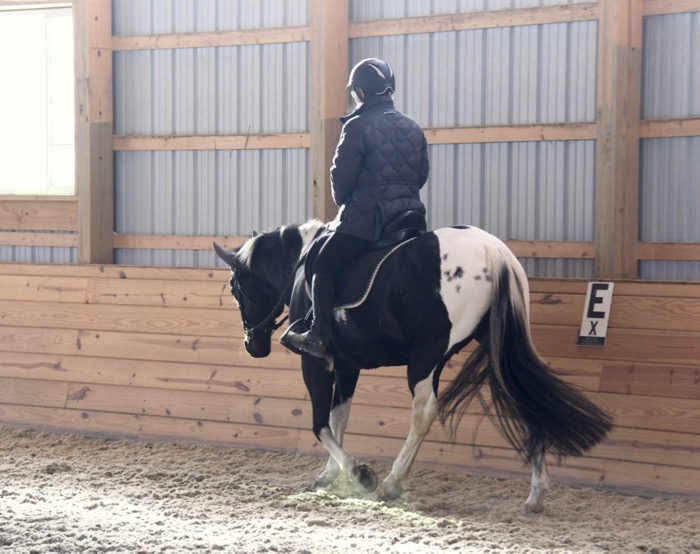 Tonka trotted on as if nothing hurt.

Tonka seemed to be saying:

This one is just right.

I bought the saddle.

We haven’t quite gotten to the happily ever part.

What I’m currently doing under saddle with Tonka is like physical therapy. If you’ve gone through that, you know it’s a challenge. It’s hard work to use unused muscles, to stretch what’s tight, and to build stamina and strength. But now, when Tonka tries, like Goldilocks, to take a nap in that most comfy of just-right beds, I rustle him up and about. Not scary like Papa Bear. Not angry like Mama Bear. Just enough. Like Baby Bear. 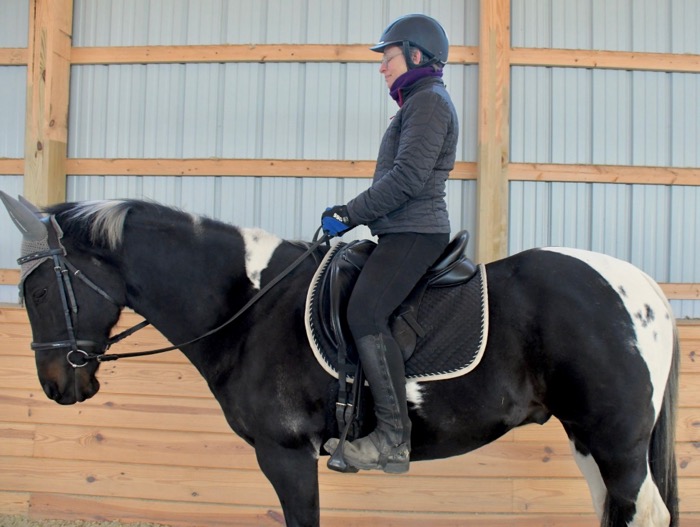 While at the barn, Janie checked the fit of my Amerigo on Tonka. It was fine, which just confirmed that my horse is as opinionated as Goldilocks. So, what had been my dream saddle is now for sale. The saddle is a truly lovely thing and should suit another horse just right. It’s an Amerigo Cervia II, 17-inch seat, short flaps. Please inquire if interested.

9 thoughts on “Saddle Shopping for a Goldilocks Horse”