The stuff that a horse wears is called tack. Most tack is used either to control the horse, or to keep the rider on. What style of riding you do, what breed of horse you ride, your skill, the horse’s level of training, and your budget, determines what you put on your horse.

This is Tonka’s bridle. I keep it simple on purpose. (Although I do like that bit of patent leather on the noseband and the onyx and pearls on his browband. Simple can also be handsome!) 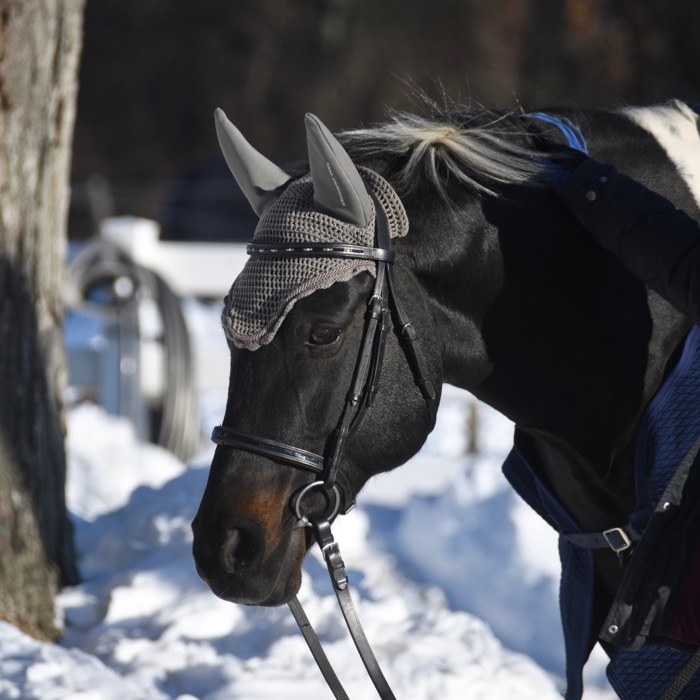 Tonka has squat Paint Horse ears. They’re bigger at the base than many other breeds. I tried several bridles before I found one that had a crown piece that allowed enough room for Tonka to comfortably swivel his ears.

Basically, a bridle is there to keep the bit in the horse’s mouth. Reins attach to the bit so that you can steer and stop the horse. Although there’s a full set of teeth in the horse’s mouth, there’s a gap between the front ones and the molars, right at the corners of the lips. That’s where the bit goes. A properly fit bit should rest neutrally on those bars, over the tongue. Some people believe that all bits are painful for the horse. I don’t. But many bits are. And even the mildest bit, in harsh hands, can hurt.

A horse in pain will try to avoid the bit by opening their mouth, or going with their head in the air, or curling their neck to avoid pressure. To prevent that, there are bridles with nose bands that crank the horse’s jaw shut, or, there are straps that go over the nose and close the mouth. Sometimes both are used on one bridle.

Tonka’s noseband does none of those things. It has three purposes: 1) it keeps the bridle plumb on his head 2) it’s traditional to have a noseband on a dressage bridle 3) it’s pretty.

If Tonka opens his mouth, or does any of those other things that tells me that the bit hurts, I reevaluate how I’m riding, what I’m asking him to do, and whether the gear fits. I could use a bitless bridle. Tonka would turn and stop in it. But, I appreciate the finesse of communication I can get from a bit. For example, if I close my pinky on the left rein and slightly change the weight in my elbow, Tonka responds with a softening through his head and neck and look slightly left. Add left leg pressure, while at the same time stepping down in my right stirrup, and Tonka will balance with cadence through a corner. I love this tactile conversation.

(In this photo my right hand is curled. This is wrong. It’s a bad habit I’m trying to break. But at least it doesn’t pull on Tonka’s mouth.) 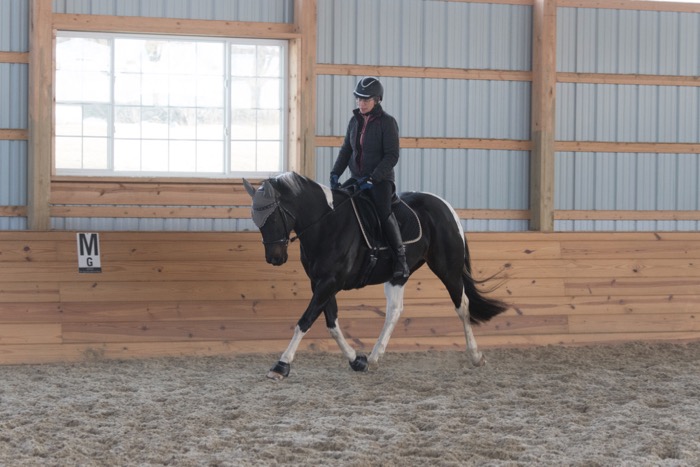 In dressage, riders have to have very still hands, and then use them in subtle and nuanced ways, to be able to communicate with the horse via the bit in the way that it is designed for. If all you need to do is stop and turn, a bit might not be necessary. I wish that I could go back and reteach all of those beginner riders that I used to work with. I’d use bitless bridles until their bodies and hands were steady.

As with everything, the arguments for or against bits are not black and white. I’ve seen bitless bridles that put pressure on a horse’s poll, others that act severely on facial nerves, others that create pain on the nose. Some horses, because of past history, ignore the pull of a gentle bitless bridle, and to keep the rider safe, one has to use a bit. (But that’s another story. So many horses need retraining to pay attention to and trust their owners. In the meanwhile, one has to find what is effective, and with as much comfort as possible, for both horse and rider.) Each case is unique. One of my clients has an elderly horse who is having difficulty swallowing when a bit is in his mouth. A bitless bridle that is basically a halter with reins, (something like this) is allowing him to still go out on leisurely walks with his owner.

Meanwhile, Tonka and I are getting along fine with a gentle bit and my on-going efforts to have kind, communicative hands.

When I ride, I reward Tonka with praise, rest, forward movement and cookies. (Do you see the little brown snack in his bottom lip?) 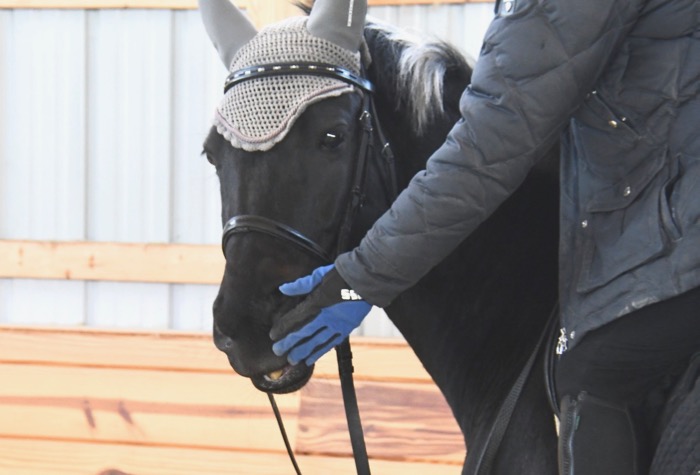 By the end of the ride, there are crumbs and saliva in the corner of his mouth. It’s itchy. When I untack him, he gets a rub. 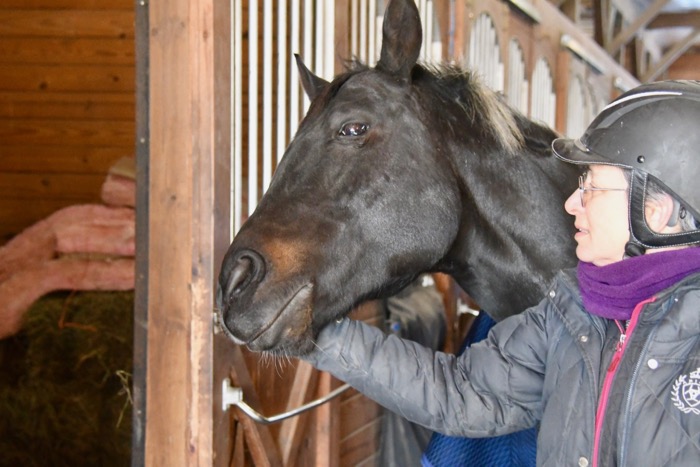 Tonka loves having his lips and gums massaged. 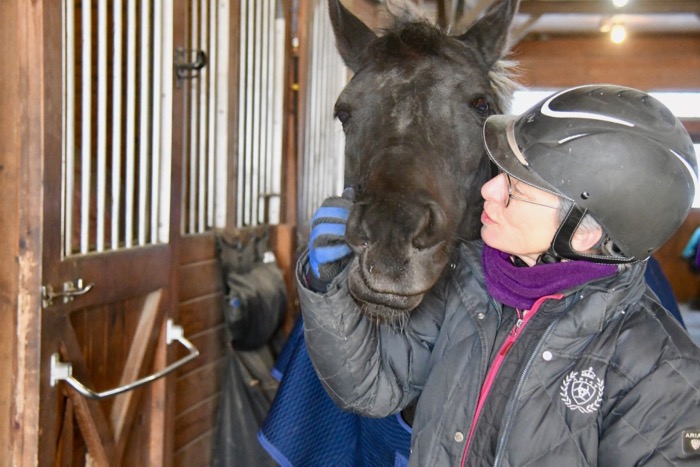 He asks for this. Tonka is not self-conscious about looking silly. 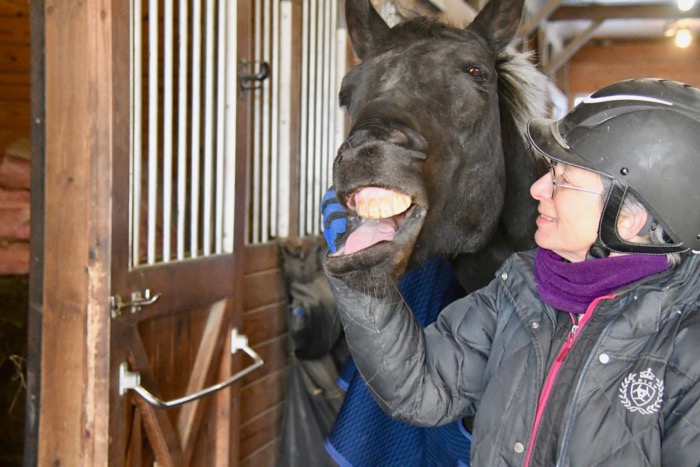 Nor is he shy about showing affection. 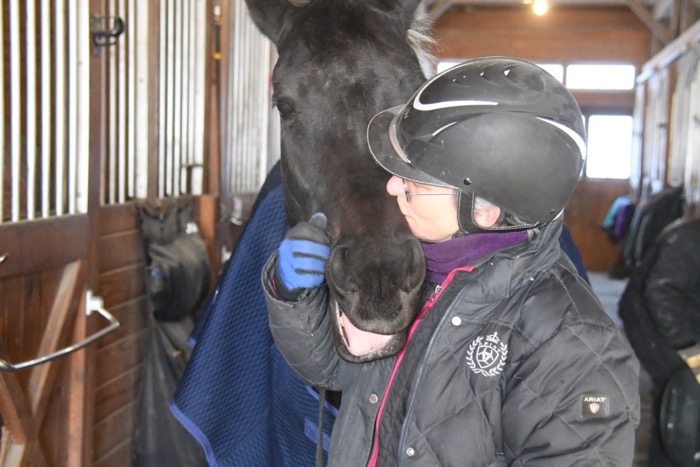 Please note: this discussion of bit or bitless can be a flashpoint. I welcome comments. However, I will delete any comments that I feel aren’t kind. There are plenty of other forums to rant 🙂