Yesterday I drove Tonka an hour south to the Tufts University Cummings Veterinary Medical Center Hospital For Large Animals. I’m extremely fortunate to have this world-class facility nearby.

Right now, though, the parking lot is a construction site. We arrived to the sound of large and small machines and much commotion. Tonka hollered a hello, and then walked right in.

You have to love a horse that looks around with interest, but remains calm! 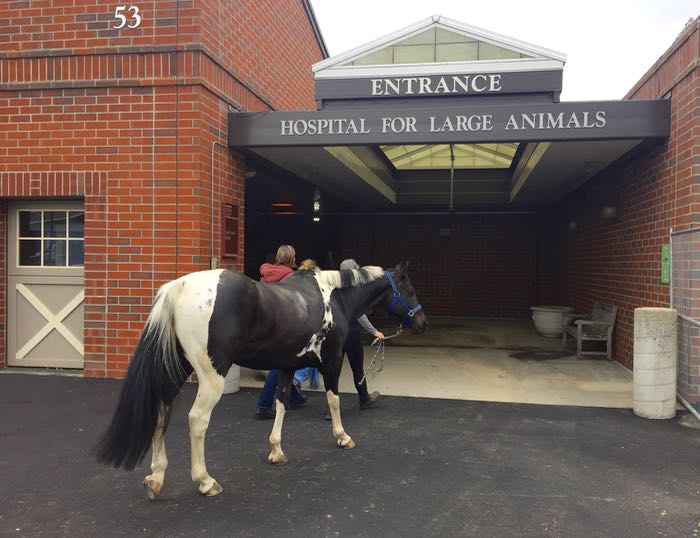 Our appointment was with Dr. Bubeck. This being a teaching hospital, she had an entourage. There were vet students, technicians, and other interested parties. There were also teams of experts brought in for consultation. At one point, there was quite the crowd! (Here Tonka is looking at a group of neurologists coming to meet him.) 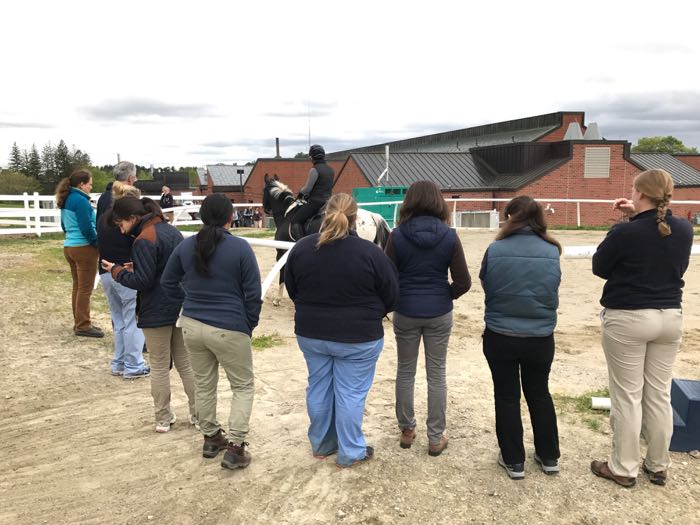 Dr. Bubeck began the exam with flexion tests. The legs were held in specific positions for a minute, 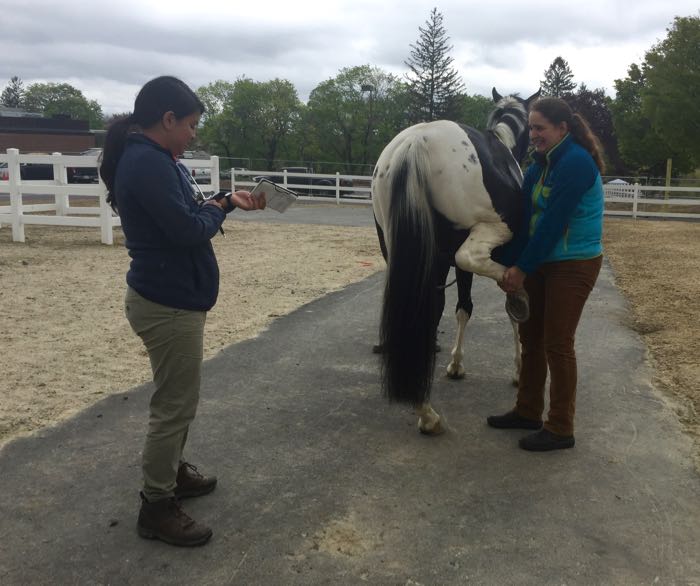 and then Tonka was trotted out. This checks the health of his joints. 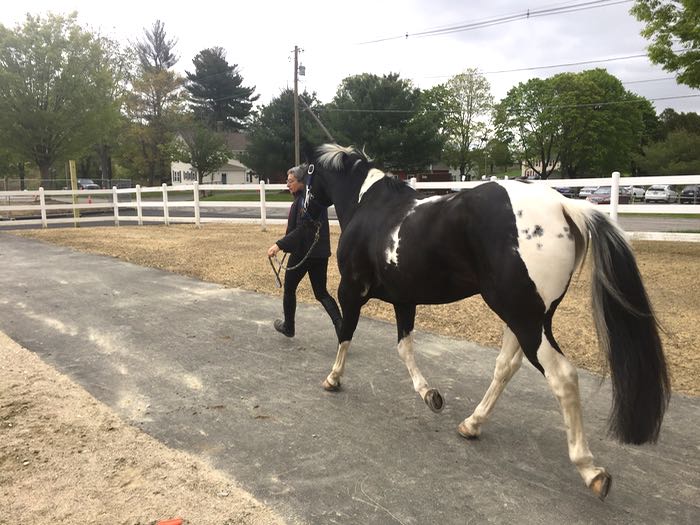 Tonka moved soundly on the straightaways, but was lame on turns.

Next, I got on to show the behavior that he’s been exhibiting under saddle.

Here he is clearly telling us that something hurts. A lot. 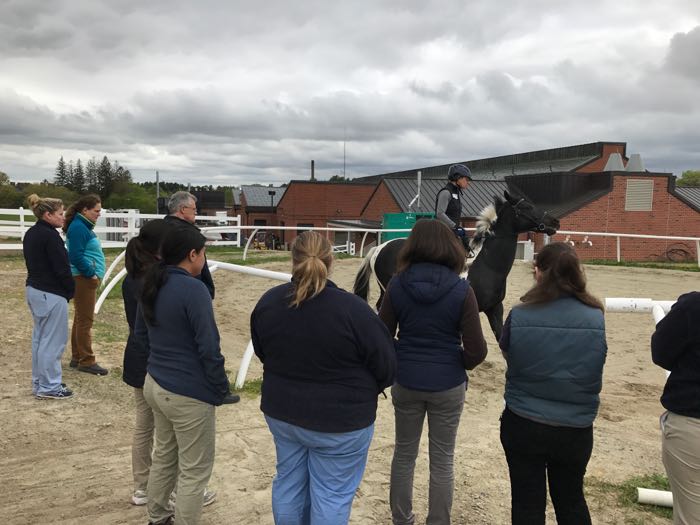 Everyone was impressed with Tonka’s attitude. He’s in a strange place, being asked to do things that cause pain, and yet as soon as the pressure was off, he went right back to being his friendly and amenable self. 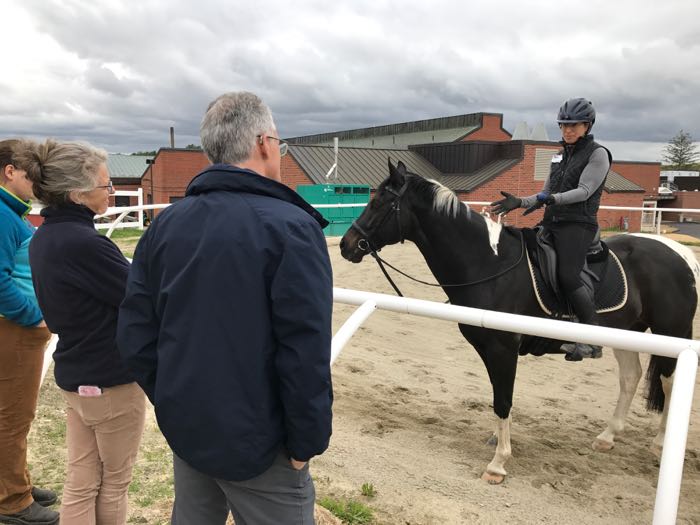 The next step was to nerve block a hoof. If after being numbed Tonka went sound on that leg, then we’d know that the pain was originating in his feet. Because Tonka was so calm, a veterinary student was able to do this injection (under careful supervision!) Tonka was gaining many fans. 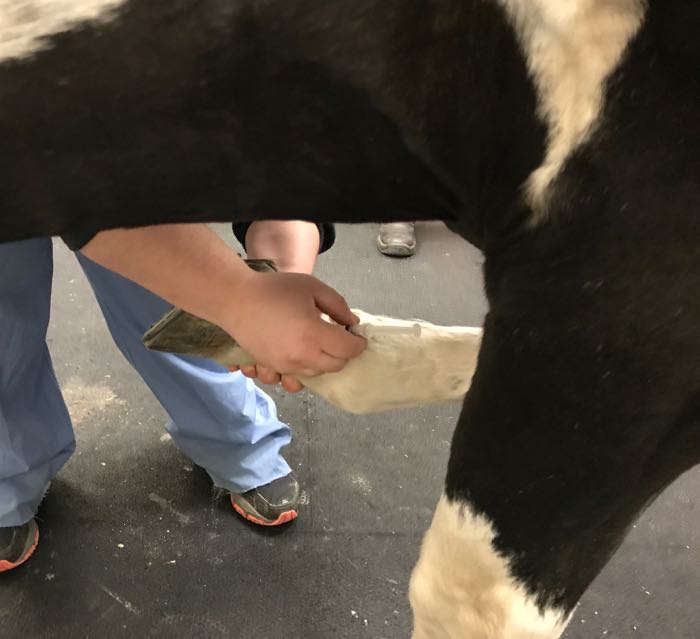 We went back out to do more flexion tests. 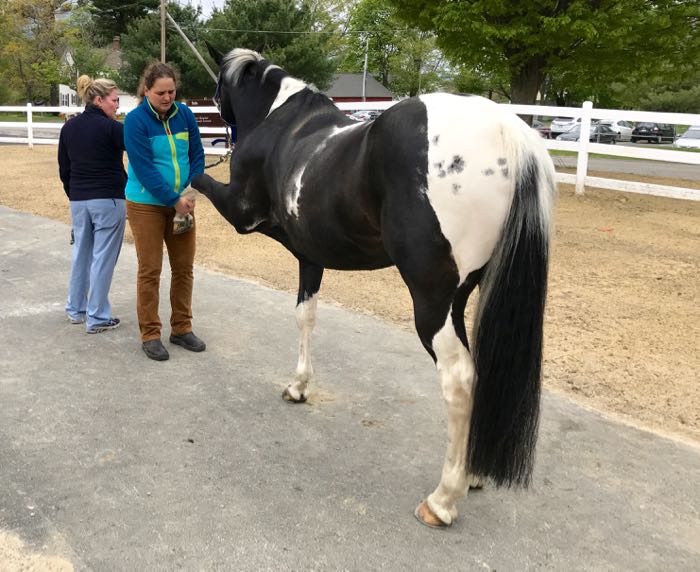 Despite the numbed hoof, Tonka remained lame on both front legs. The pain was coming, as suspected, from the neck.

All of these examinations were taking time, but this is a teaching hospital, and I was grateful that the doctors were willing to explain things to me as patiently as they do to their students. Doesn’t it look as if Tonka is interested, too? 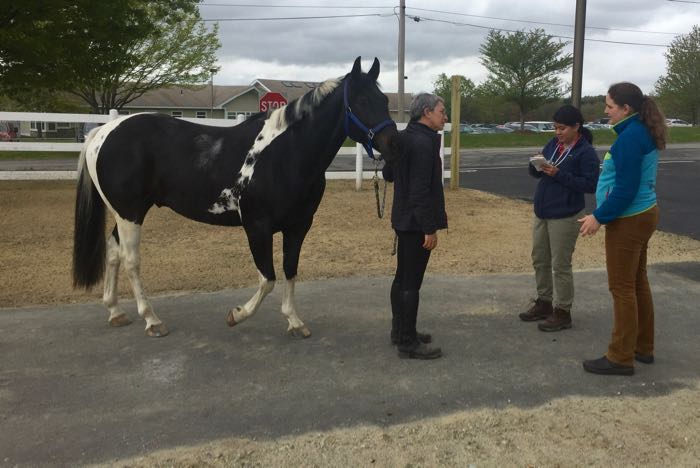 I was asked to get back on him one more time. It rained. No one, not even Tonka, complained. 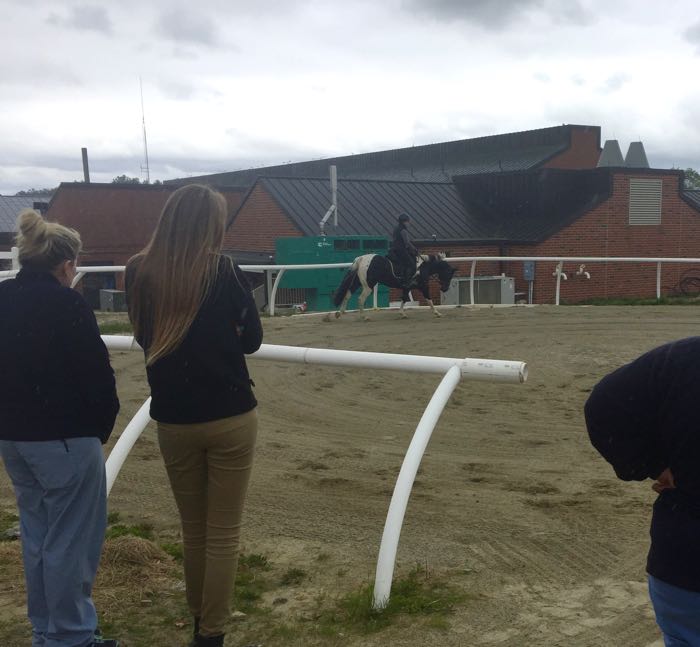 The next step was to take X-rays. They confirmed arthritis in two areas of the neck. Dr. Bubeck showed me, on this skeleton, where the degradation of the bone on Tonka is. 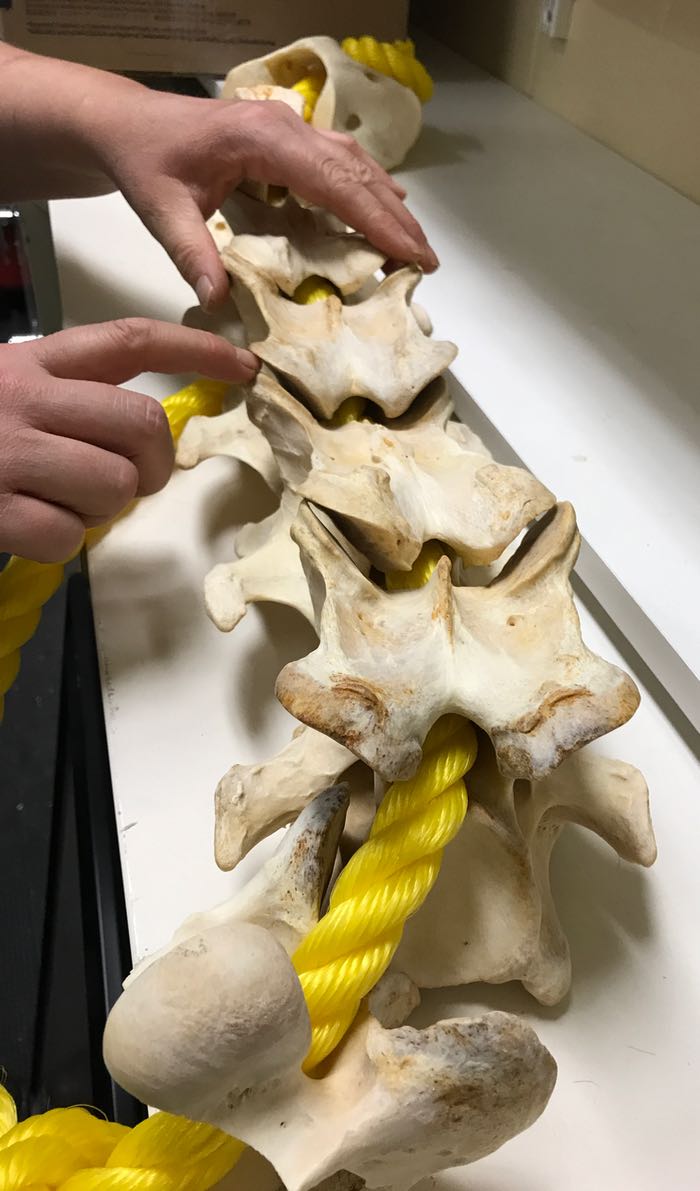 Medications injected into these joints can help to lubricate and protect them from further damage, and to reduce discomfort from the already present arthritis, and so it was decided to go ahead with this treatment. Tonka was brought into a room the likes of which he’s never seen before. But, we have a lot of trust in our trust account. He walked right in. He did have to be tranquilized for this procedure. Tonka likes his ears rubbed when he’s feeling drowsy. 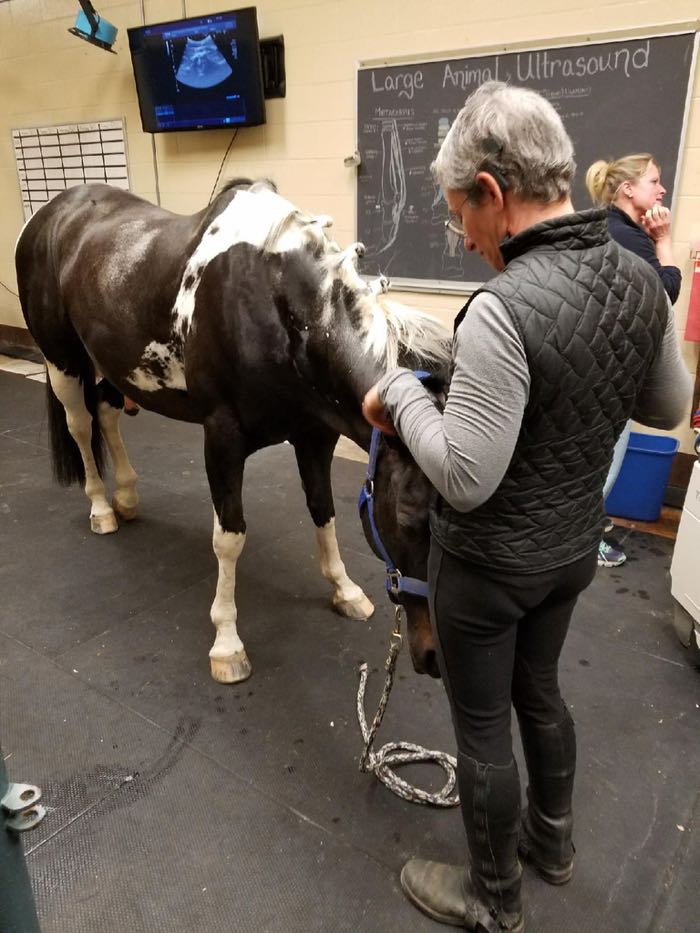 Because the issues in the neck vertebrae didn’t explain his ear shaking (the first symptom that I noticed back in January) I asked to have an ultrasound done of his poll (that’s the area between and behind his ears.) That required shaving some of his mane off. Tonka HATES clippers. He came to me with that quirk, and since I never clip it’s not something I’ve dealt with. It turns out that even when tranquilized, he still puts up a fuss. A second dose of tranquilizers settled that. (Not completely though! Boy, does Tonka hate clippers.) 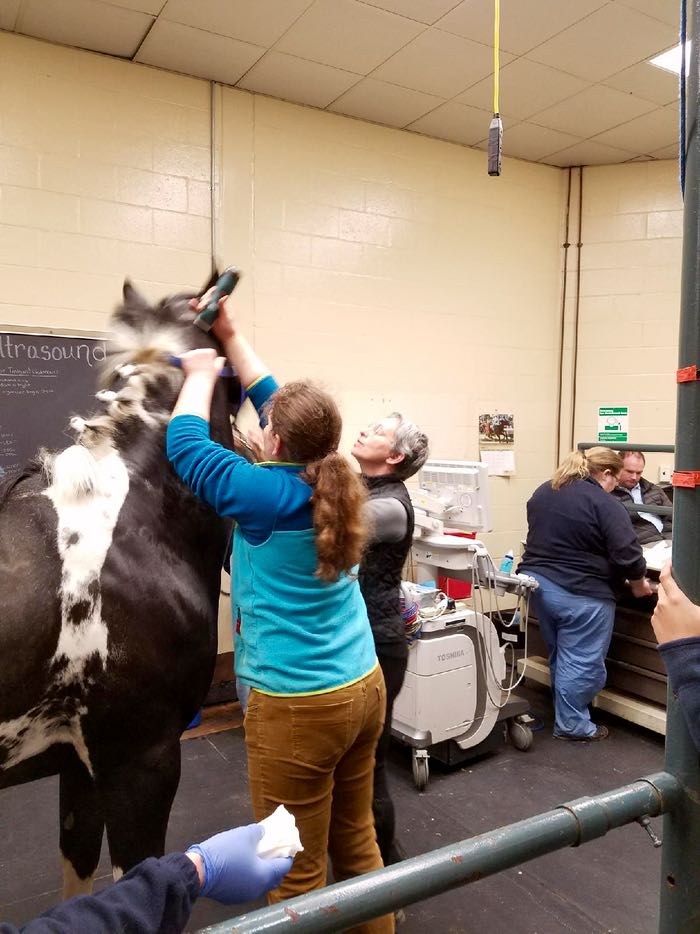 The ultrasound showed slight bursitis, which explains the head tossing. Dr. Bubeck said that we caught it early enough and that it should heal on its own.

Tonka and I were at the hospital from 11 am until 4:30 pm. It was a long day, but it was a good one. The staff exceeded my expectations. Everyone, from receptionists, to vet techs, to consulting veterinarians, were kind, patient and thoughtful. Dr. Bubeck was thorough but didn’t pressure me to do excessive testing. We were never once rushed. All of my questions were answered. And they all heaped love and praise on my horse. That helps.

It also helped that I went home with a good prognosis. After a thorough exam, Dr. Bubeck pronounced that Tonka’s joints and hoofs are in great, 100% sound working condition. That means that the hock injections done recently were effective. Yes, Tonka has arthritis in his neck and a bit of bursitis in his poll. But, the injections should alleviate the pain (as it did in the hocks) and within 3 weeks he can return to full work. We can even continue with our dressage training. The mysterious swellings that I noticed on his neck were not due to nerve damage, rather they were muscles that built up as Tonka tried to move in a way that avoided the pain in his neck. Now that Tonka will be able to carry himself naturally again, those muscles will return to normal.

All in all, an excellent prognosis!

Tonka had a good night’s rest, as you can tell by the shavings in his tail. 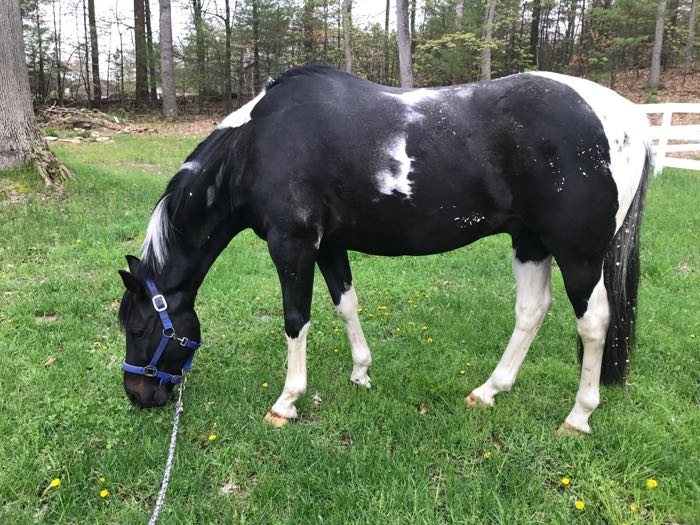 He’ll have a few days of limited turnout, and then we can begin to get back into trail and dressage shape. We’re both looking forward to it! 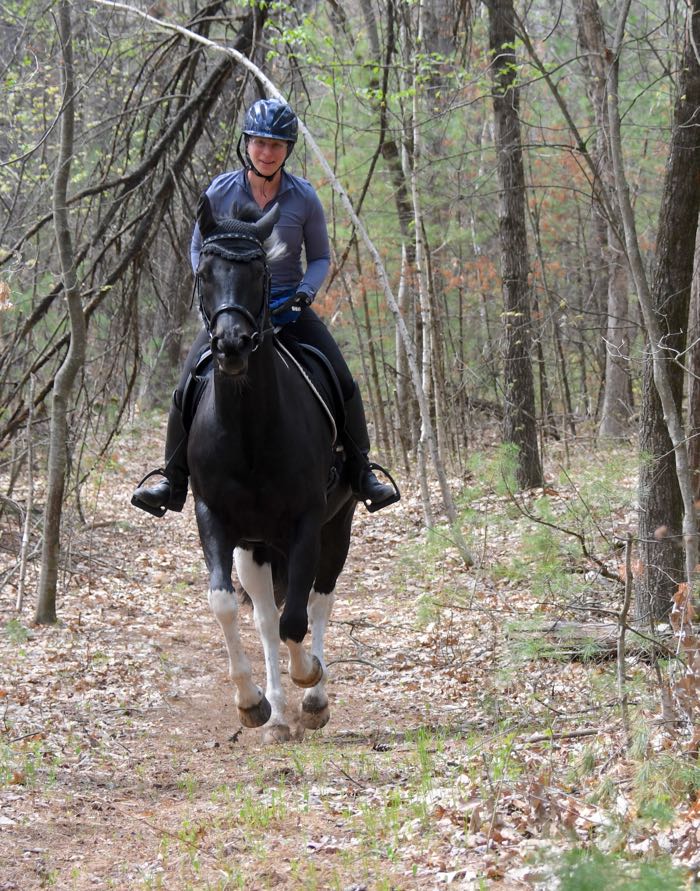