Although a horse’s safety can depend on putting distance between themselves and what scares them, it’s not true that they take flight without thinking. Blindly taking off carries risks – of running headlong into a worse danger, of injuring oneself, and of being separated from the herd. A horse prefers to assess the situation before flight. At the first hint of trouble, a horse will lift their head and use their senses of sight, smell and hearing to decide if the threat is real. 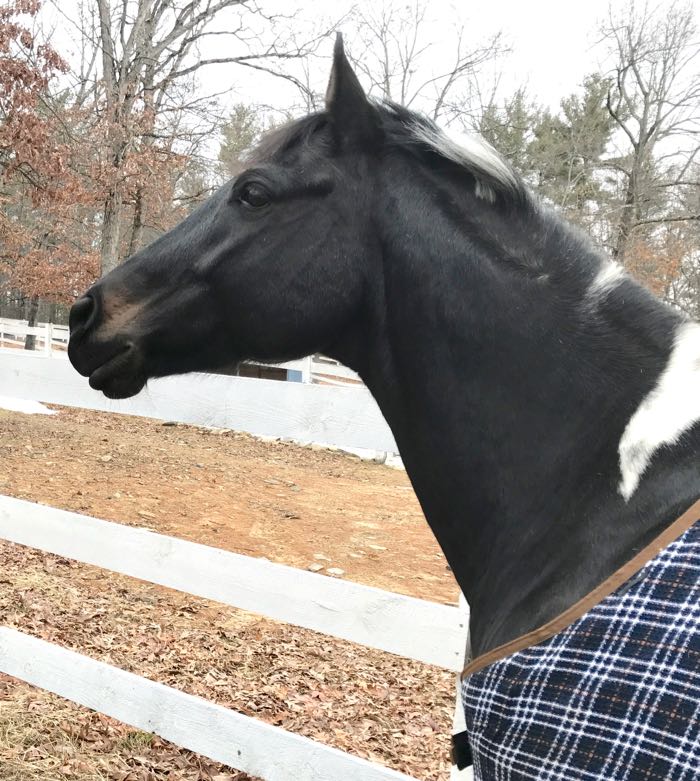 If in doubt they’ll take off briefly, then stop and look again. If whatever triggers the fear is dramatic, the horse will react in kind. It can be quite scary to be on a frightened horse. Even if the horse is stock still, you can feel the muscles quiver as if an explosion is about to happen. Being on a galloping, out-of-control, 1,000 pound animal is not something any rider wants to experience.

This is why horses advertised as bombproof are so popular. However, creating a bombproof horse is not always done in a kind way. Often, horses that fit this label have are taught that expressing any reaction to the environment is either useless or causes pain. The goal is to have a horse that stays calm in the face of any stimulus. Such training, which uses punishment, doesn’t always have the desired outcome. Some horses become aggressive. Some become scared of the world at large. Some learn to buck their riders off. But the ones who do become “bombproof” are often dull to the world,  which is not an emotionally healthy place for any living being. However, such horses do feel safe to their riders and so training with punishment is widely done.

You often hear trainers say “the horse  has to be more afraid of you than the thing it’s spooking at.” I remember accepting that mantra. Now it makes me sad. Under those terms, if my horse does as told, it’s only because he believes that the alternative is worse.

But a horse doesn’t have to be “respectful of the rider ” (I put this in quotes, as it’s usually a euphemism for fear of the handler) to behave in a way that is safe for everyone involved. With kind and progressive training, a horse can learn that things that flap, twirl, make noise, and scurry across trails, pose no threat. 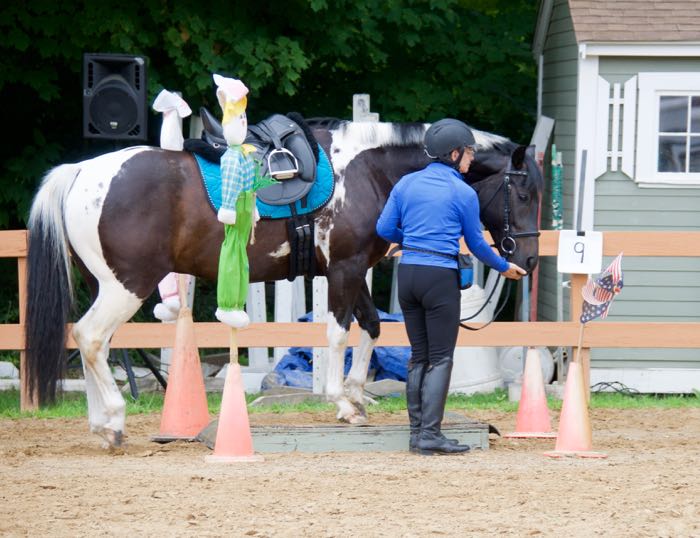 Getting a horse to be calm, despite chaos in the environment, can be done with a technique called desensitizing, which entails exposing the animal to the object/situation incrementally until they become blasé to what would otherwise cause alarm.  However, “desensitizing” is often attempted when the horse is already in a state of fear. I was recently called in to work with a gelding that had been “desensitized” to a tarp. A plastic sheet had been tied to the saddle and the horse was let loose. Nothing this horse did could get rid of that tarp and he eventually gave in. Yes, the gelding no longer gallops off when a sheet is thrown over him, but now, approach him with an object somewhat like that tarp, such as a saddle pad, and he trembles in fear.

Sometimes what frightens a horse can seem just plain silly. Tonka used to be terrified of a rabbit. Every time we rode past the entrance to its burrow, Tonka’s head would shoot up like a periscope.  I thought that if Tonka could get a good look at the rabbit that he’d stop being afraid. Nope. One day we came across the bunny peacefully munching on grass. Tonka jigged and snorted. It took many rides past the rabbit’s turf for Tonka to accept that the bunny was not going to attack him. This process of teaching an animal to overcome fear is easier to do when the trainer is in control of the scary object and can introduce it in small doses, but obviously I had no say with that rabbit!

Another method of teaching the horse to respond with calmness to scary things is to pair the frighening object with something good. I recently had an opportunity to do this. We haven’t had a lot of snow, but what we have had, has stayed, especially in the shade in the woods. I was riding Tonka up a familiar path. We were going along relaxed, when he suddenly stopped. I didn’t see anything to be frightened of, so pressed my legs against his sides, asking him to walk on. However, instead of going forward, he backed up. When Tonka is scared, he doesn’t bolt; he goes backwards! When I first got Tonka, I learned about this default behavior when he heard a sputtering engine start. He backed me right into a thicket of saplings. I had to fold myself over the saddle and grab onto his neck so that I wouldn’t be rubbed off by tree branches! These days, it rarely gets that extreme. Tonka will back up a step and stop, which is what he did during the ride that I’m telling you about.  Do you see that? he asked. I looked around. Nothing. Asked him to proceed. He backed up. I looked again, trying to see the surroundings from his point of view, and that’s when I identified the terrifying object: a snow pile. 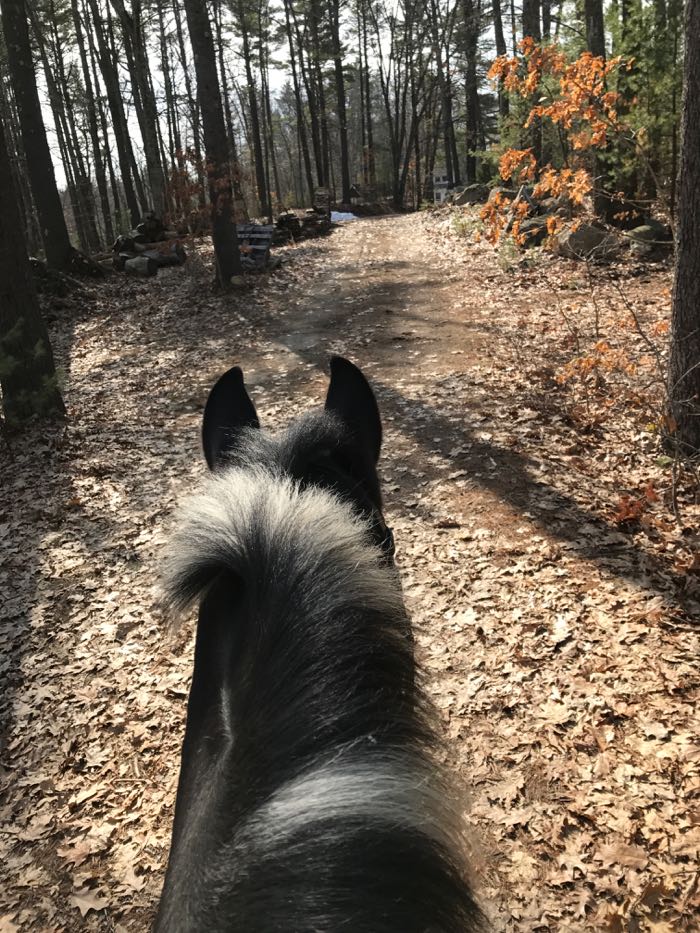 It was bright white in the dark woods. He had no frame of reference for it.

I looked at it. He could feel my body orient to the scary thing. I took a relaxing breath. He felt that, too. I unwrapped a mint (a sound he responds to with happy anticipation.) That, I said, is a pile of snow. Here, have a mint. 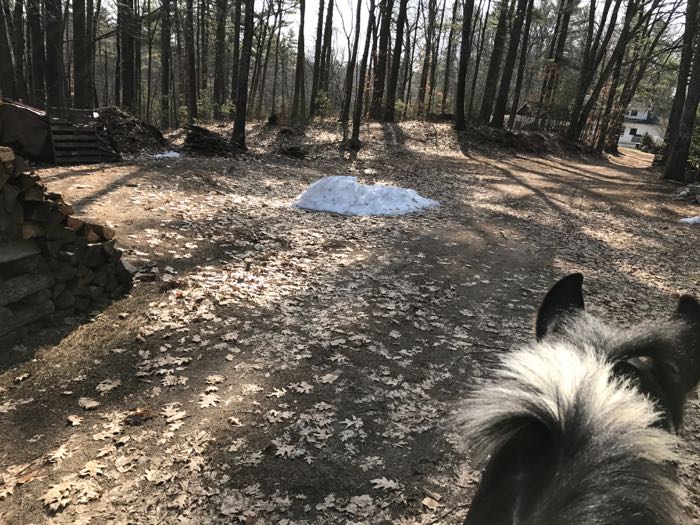 He crunched. He walked a little closer. Yep, I said, that is one good snow pile. Have another mint. 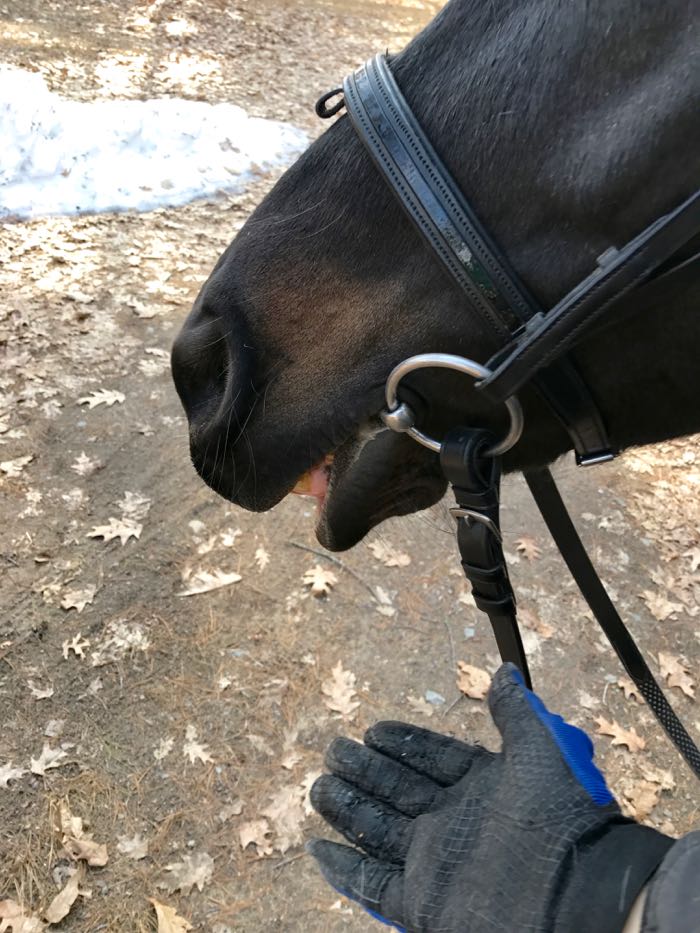 Warily, he approached it. Super duper pile of snow, I said. Have a mint.

The next day we headed down the same path. There was no hesitation. 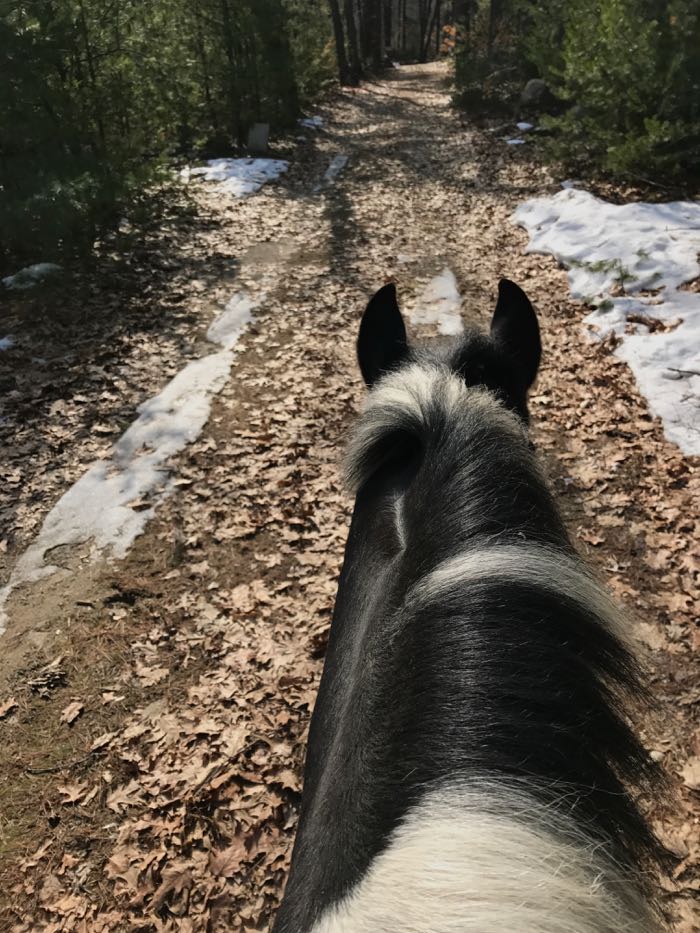 We walked a few yards beyond the snow pile and I asked Tonka to stop. Brave boy, I said. Have a mint.

Note that I rewarded for marching past the snow, not going right up to it. I don’t teach my horse to investigate scary things because there’s often a good reason to keep one’s distance – it might be sharp and/or hot (a working tractor), in an unsafe place (in a boggy patch), not something you should go up to (a wild turkey) or somewhere at a distance that I don’t want to go (a box of flowers on the outside of the dressage ring. Going up to that would get us eliminated!)

Tonka no longer has problems with isolated mounds of snow. What’s more, this sort of training develops trust so that when he feels me press my legs against his sides, he knows  that I’m guiding him somewhere safe.

One last thing; because Tonka is not bombproof, he alerts me to things that I need to know about. Last fall he made me pay attention to cawing crows that were out of sight up the trail. He stopped. I asked him to go forward, which he did, but with trepidation, and soon I understood why. He knew about the big dead thing up ahead before it was in view. My dull human senses failed me but my horse did not. This was a recent kill, which attracts coyotes, and it was smart to avoid it. We turned around. I trust my horse’s judgement, as much as he trusts mine. That’s teamwork.

9 thoughts on “Not “Bombproof””