What drives some of us to ride dressage is the fine-tuned communication that you develop with your horse. A slight press with a leg, a subtle shift of a sitting bone, a closed finger on a rein, and the horse responds.

All of us who ride dressage are after something called feel. It’s when your hands, holding the reins, which are attached to the bit, seem to connect you right to your horse’s heart. When you have feel, it’s as if your thoughts and your horse’s body are in a mind meld. It’s the closest thing to being a centaur that I can imagine.

Feel is hard to learn, and even when you get it, difficult to maintain. After more than forty years in the saddle, I still need lessons. At this point I’m working on finesse and consistency. My trainer, Kim, does her best.  Here Kim shows me where my hands often are: 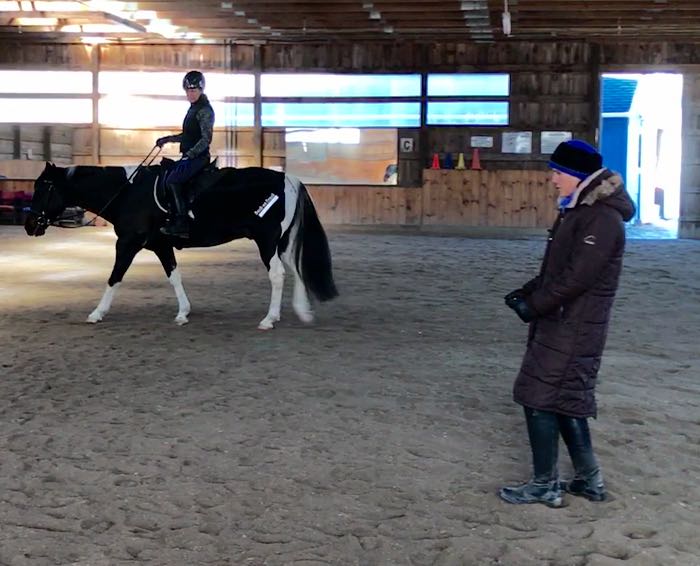 and where they should be: 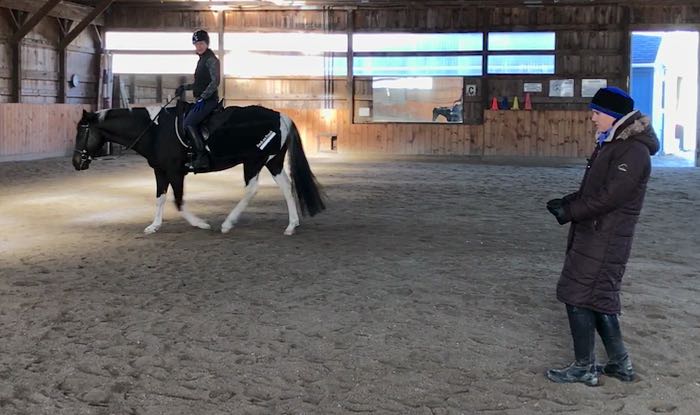 What also matters is give. One can hold the reins in the right place but restrict rather than allow movement. I see this all too often – the rider looks correct, but the horse balks at going forward, so the rider uses her spurs and whip, urging the horse on. But her message is mixed and everyone is frustrated. The first thing to do is not to fix the hands, but to give with your mind. Riders get fixated on demanding bend and flexion, when instead they should be asking their horses Can you go forward? I will receive your energy and give it back to you.

If feel was only about mindset, I’d be a perfect rider. However, you also need physical control and coordination – which is hard enough on my own two legs, let alone on a four-legged, thousand pound, sentient being! Compounding that challenge is that we all have our asymmetries. My left hand turns inward. My left shoulder lacks elasticity and my right elbow sticks out like a broken wing. Kim helps me to correct these faults, and when I do, Tonka goes better.

Kim is one of my instructors. Tonka is the other. My horse pays attention to me, and he trusts that I pay attention to him. I listen to his slight changes of rhythm, a twist of the head, a rise of the back. I respond with changes in breath, position, and where I press my body against his. He then changes how he goes. It’s a fluid, on-going conversation. Most of the time this dialog between us is subtle. But sometimes, Tonka has to be more dramatic for me to hear him.

Here my reins are too long, too low, and my forearm muscles are tight. Do you see how my left hand is pulling back instead of giving? So, Tonka’s nose goes behind the vertical (a serious fault in dressage) and he powers downhill instead of moving with suspension. 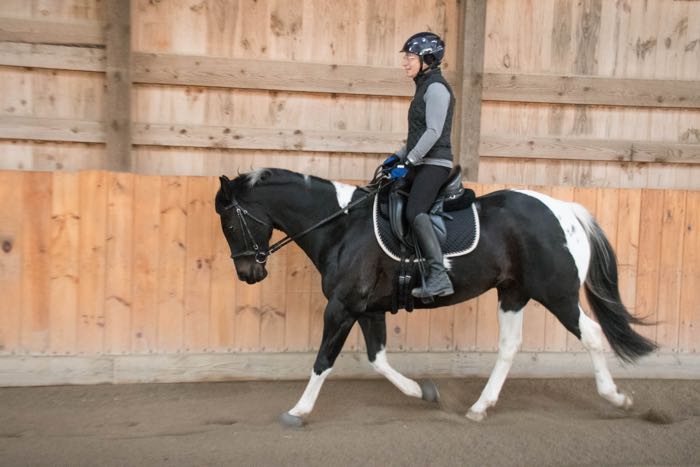 I can feel what’s off, so I put my weight in my elbows, not my hands. The connection becomes soft and elastic. 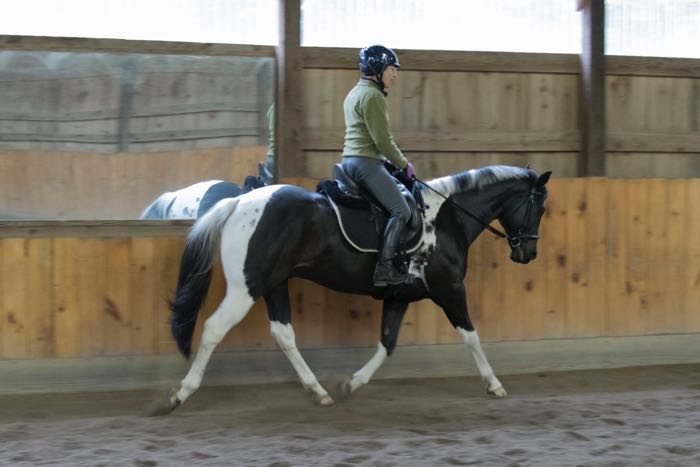 We’re both happier and the trot feels effortless.

Dressage training isn’t static and it’s never finished. You get to one level and work on the next. Tonka and I have started a new exercise: walk to canter. Done right, he steps from a medium walk into a canter. Up until now we’ve only gone from trot into canter – this new transition physically and mentally challenges him. The first time that I asked for it Tonka did it quite nicely. In this video you can see him think about what I’m asking for, figure out how to do it, then proceed.

Kim was pleased with this, but pointed out that I had tipped forward and pulled my hands towards my belly. The next attempt I was determined to improve my position. But, in doing so, I thought up and back, not give and forward. Tonka told me that he couldn’t possibly do the transition when I rode like that.

I could have seen this behavior as “naughty” or “oppositional” but I knew it for what it was – Tonka was telling me to ride better!

So I apologized to him, fixed my hands, and Tonka went back to being the willing horse that he is. (Note that he is marked and rewarded for this behavior chain.)

Then I changed direction. Before I even had a chance to ask for a walk to canter transition, Tonka had a message for me. 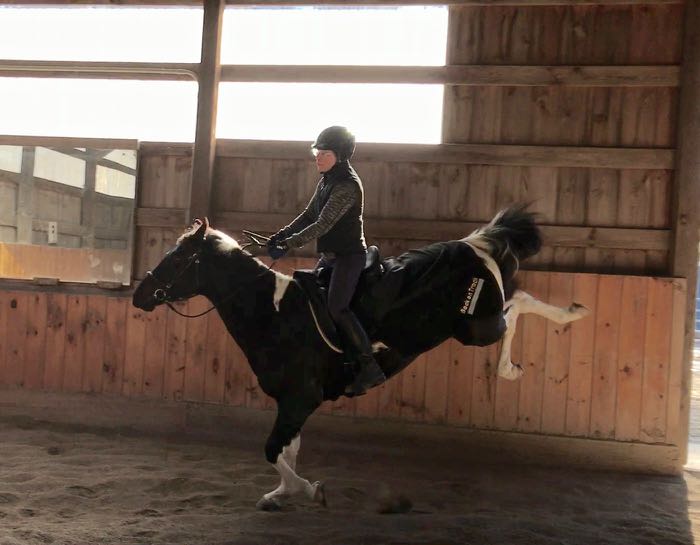 Tonka is stiffer to the left than the right, especially at the canter. He knew what was coming, and he was letting me know that he wasn’t ready to do it this direction.

Once again, I apologized to Tonka and then asked him to trot in a long frame. He told me that the trot felt better and we got back into sync. Do you see his swinging tail? That’s a sign of a relaxed and happy horse.

Riding is communication. It’s a two-way street. If you demand but don’t listen you won’t have feel. You’ll also have a horse who has to shout. It’s a lot more fun when you both whisper.