It’s always good to get out of one’s comfort zone to further one’s education, and so when I heard about a camelid training course, I signed up. Last week I spent three days in Florida learning about these animals.

Before I went, I knew little about alpacas and llamas. Once in their presence, I realized that although they are about the same size as horses and have four legs and hooves, that they have little in common with my favored species. Alpacas are skittish herd animals, kept for their fiber, and llamas are pack animals that are sometimes used as guardians of flocks. However, all creatures in this world function according to the laws of behavioral science. The first day of the course was taught by Dr. Susan Friedman, who dispatched this information in her clear manner. Here is Dr. Friedman with one of the “practice llamas.” 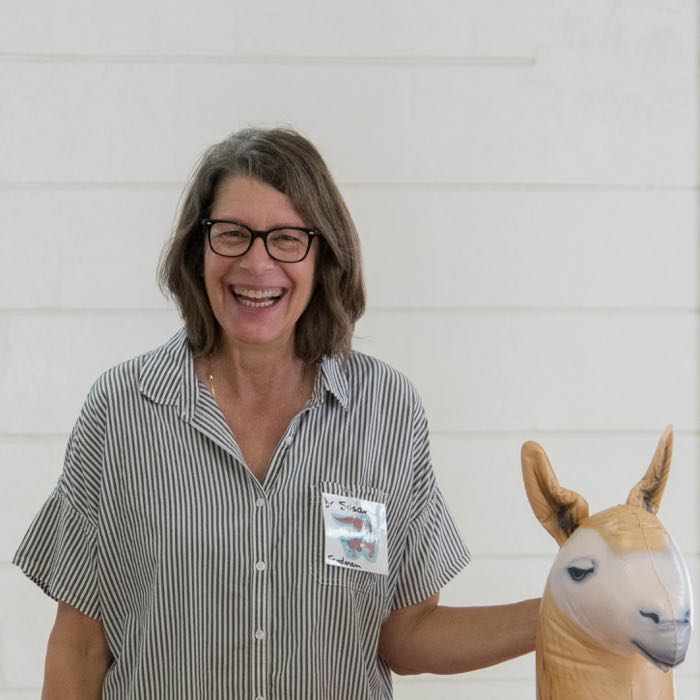 For the next two days, we learned about camelid handling from Marty McGee Bennett. From a distance, llamas and alpacas are beautiful beings, and their fantastic coats and massive dewy eyes give them a soft look. 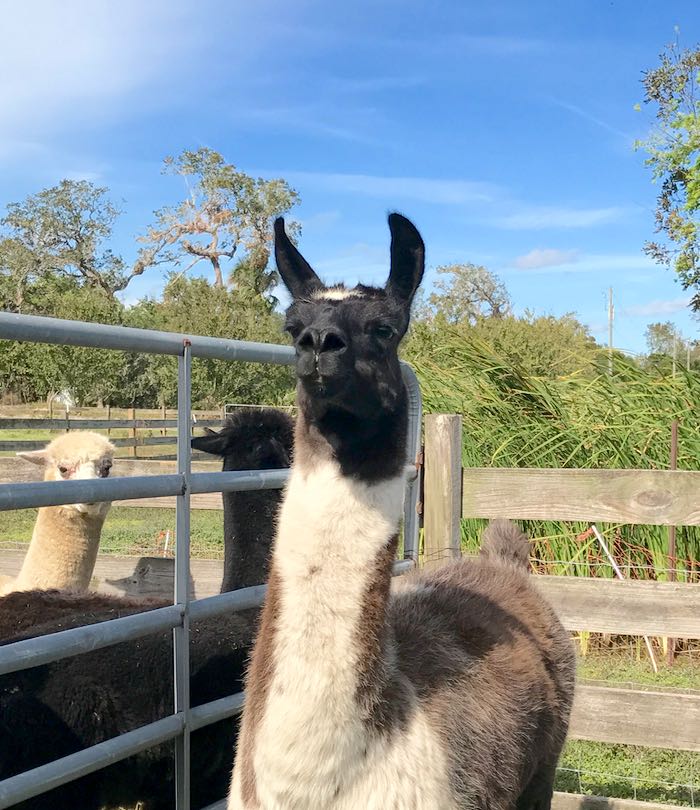 However, they don’t take to strangers! This llama is letting me know that I am close enough. He’s humming an I don’t think so song and giving me the stink eye. It was unnerving. 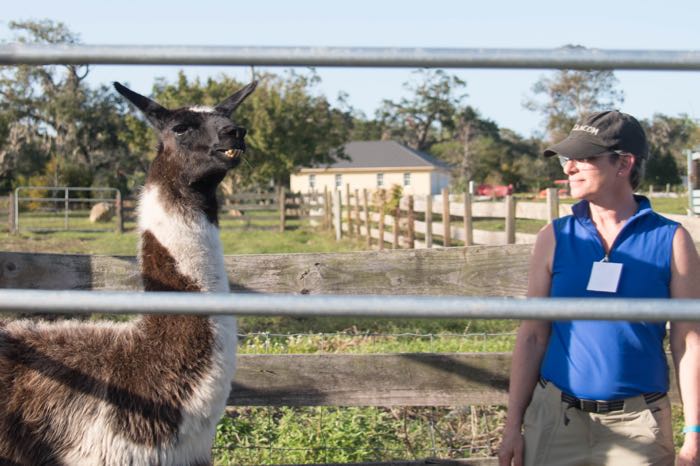 The alpacas aren’t as tall as llamas, so I didn’t get that look down their nose at you stare from them. Still, this isn’t exactly a welcoming countenance. 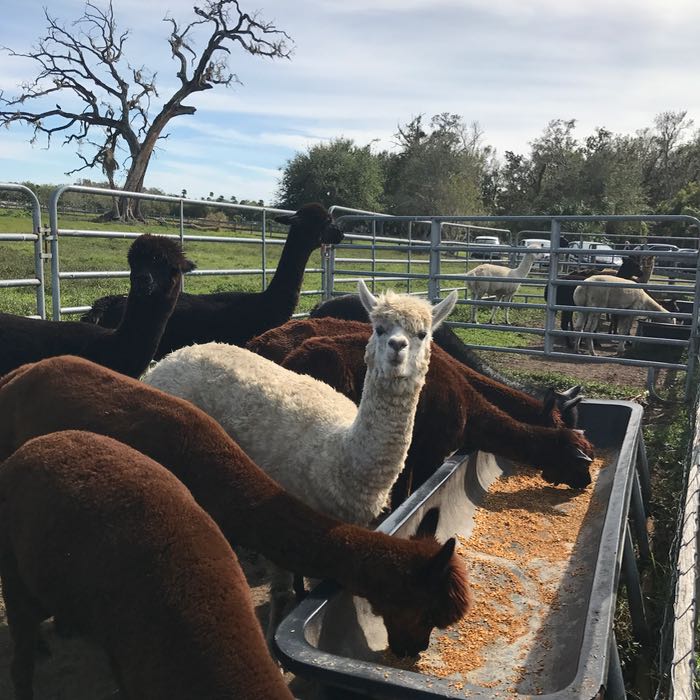 But Marty McGee Bennett is thoroughly comfortable around these animals and she guided us through how to approach (sideways!) and work with them. She explained how most alpacas are handled only twice a year for shearing, and so it’s more a matter of handling than training, and the idea is to do this with as little stress as possible. She accomplished that easily. I’d need several more sessions to hold an alpaca’s chin! 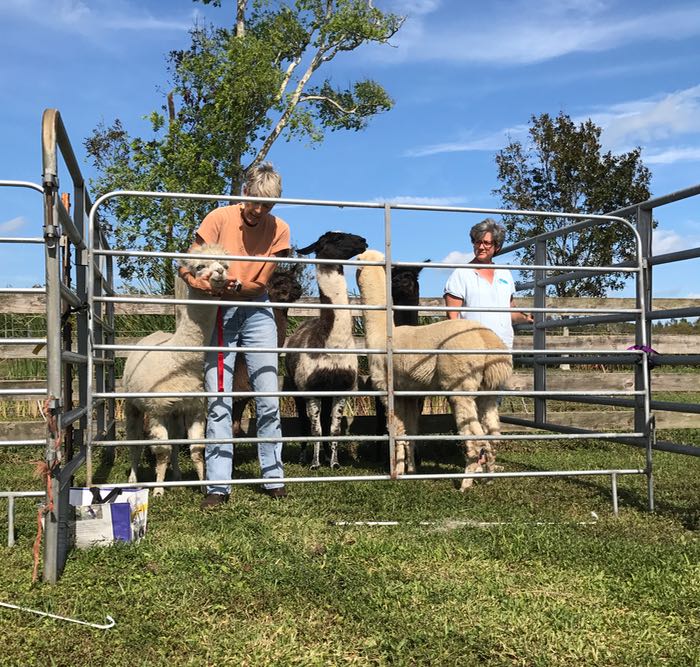 That distinction between handling and training is an important one. In a perfect world, our animals would be trained in a kind and effective way so that anything we ask of them is understood and calmly accepted. My horse has been taught that standing for the farrier is no big deal. Before he ever had a blacksmith rasp his hooves, his first owner taught him how to pick up his feet and stand quietly. This isn’t always the case. Recently I had to restrain a yearling horse who had not been taught about hoof handling. The farrier had to trim a damaged hoof. I had to keep the farrier and myself safe, while trying not to stress out the horse. It wasn’t easy. I handled the yearling as best I could. Training is in this youngster’s future!

I’ve taught Tonka to walk into a trailer on his own. This makes going to shows and trail heads stress-free. If there’s ever a medical emergency, I know that I’ll be able to get him into the trailer and to the vet clinic easily. Camelids can also learn how to load into trailers and stand for hoof care. 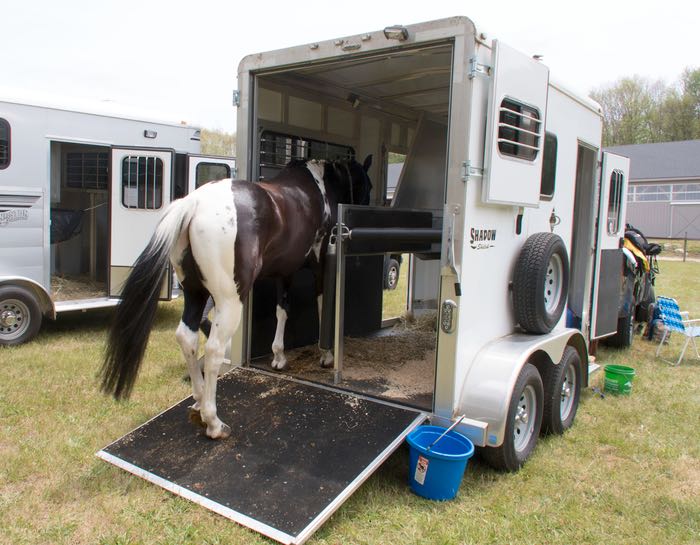 The last day of the workshop (which I was not able to attend) was hands-on, training the llamas and alpacas to lead, stand for hoof trims, and do other useful things, all using positive reinforcement. However, for many farmers who keep these animals, training isn’t a realistic goal. Unfortunately, for many camelids this means that their rare interactions with humans are done roughly with much manhandling. One participant at the workshop came all the way from Australia where her alpaca herd numbers in the hundreds and they roam wide open spaces. It’s not possible for her to train each of those animals to stand quietly for shearing, but she wants to handle them with as little stress as possible. That she cares enough about her herd to travel halfway around the globe to seek out another way of doing things is heartening! She’s been to Marty’s courses before, and wanted to learn more. Understanding behavior science and applying that to herd management has transformed the lives of her alpacas, and has made it more enjoyable for her as well.

Even for those of us who are able to train our animals, there are situations that we can’t anticipate, and others that the animal is too scared or in pain to respond in the safe, sane way we’ve trained them to. In these cases, one hopes that whatever you have to do to get the job done isn’t so traumatic that it impacts your on-going relationship with your animal.

In truth, despite this parsing of the words handling and training, everything that we do affects what comes next, whether we plan it out as a formal learning session or not. The fact is that every action has a consequence. If the consequence is reinforcing, that behavior will happen again. If not, it won’t. There’s much solid research into how consequences drive behavior. To delve into that, read this book: The Science of Consequences: How They Affect Genes, Change the Brain, and Impact Our World. (It’s actually an enjoyable read, and even good for people who aren’t science geeks!)

Despite how totally adorable baby alpacas are, I did not come away with a newfound love of camelids. 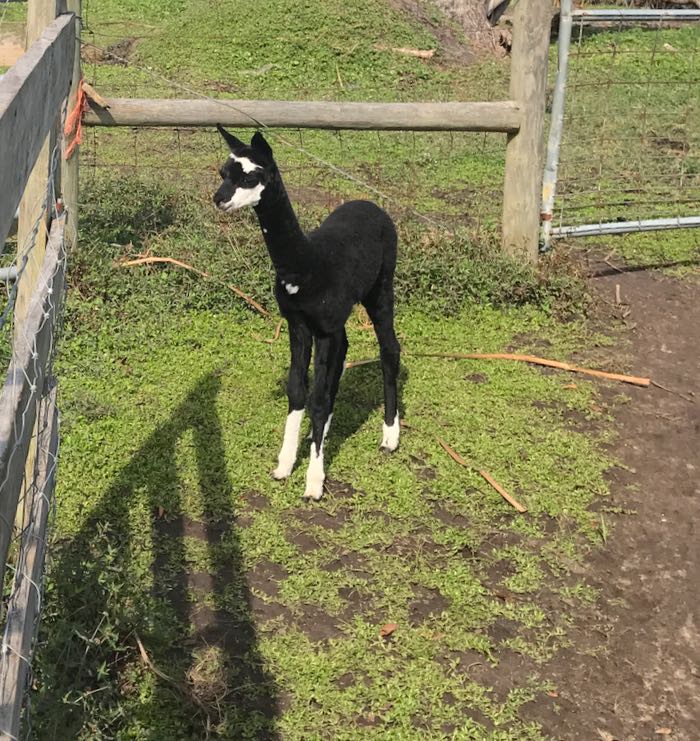 I did, however, come away with a respect for the people who handle them with thoughtful care – even when they’re being given the stink eye.

One last note: there were several participants who I greatly enjoyed meeting, who own pet camelids that are affectionate, friendly and fun! It just so happened that the camelids that I worked did not feel as magnanimous to humans.

5 thoughts on “Alpaca and Llama Training”