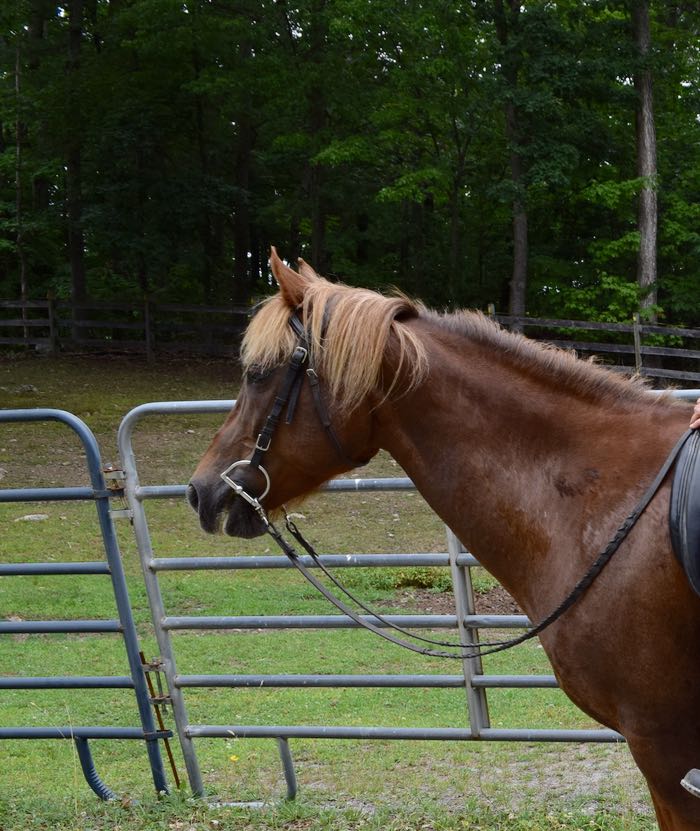 He lives on a property with several dairy goats, a fine farm dog and a doting owner, Susan. It’s a good life. He lives out 24/7, has free-choice hay and is ridden almost daily. What he doesn’t have is an equine companion. Although horses are herd animals and it’s best to have them with other equines, it’s not always possible or necessary. Once in awhile a horse is antisocial. I have a friend who owns a mare who truly doesn’t like other horses. She’s much happier now that she lives on her own private farm with goats for friends. Hayden doesn’t have that mare’s issues, but for various reasons, for the last four years, he’s been the only horse on the property.

I’ve been working with Susan and Hayden so that they can go riding on the trails. Although Hayden obviously enjoys the outings, he can get spooky and Susan would prefer company. A friend, Amy, who keeps a mare up the road offered to go out with Susan. But in this situation, they couldn’t simply meet on the trail. First we needed to find out what Hayden would do around another horse. Would he be so excited as to be dangerous to humans or the horse? Would he panic? After the ride would he go bonkers when she left for her own barn?

I helped Susan come up with a plan to introduce Hayden to Amy’s mare, named Fairy. Amy told us that Fairy was rock solid in unfamiliar surroundings and with new horses. Perfect. On Monday, Amy rode Fairy up the road to Susan’s farm. Hayden was in his comfortable flat halter. I held his cotton lead rope. We positioned ourselves so that we could see Fairy and Amy approach. Susan let them in the gates and they proceeded to walk around the ring. Hayden and I were outside of the arena, on a flat patch of ground. Just to take the edge off of his excitement, I walked him in circles and fed him timothy hay. Chewing always calms horses. Hayden hollered a hello a couple of times, flared his nostrils to smell the new arrival, and held his head quite high. I let him do these things. Because he was allowed to assess the situation from a safe vantage point, Hayden didn’t pull or prance or go into flight mode. It was a good start.

When horses meet, nose to nose, body language escalates and there’s often squealing and striking out. We avoided that. I used a protocol similar to what dog trainers use when introducing a reactive dog to another. This entails keeping a distance below threshold, and walking behind the other animal.

I asked Amy to walk Fairy around the ring. 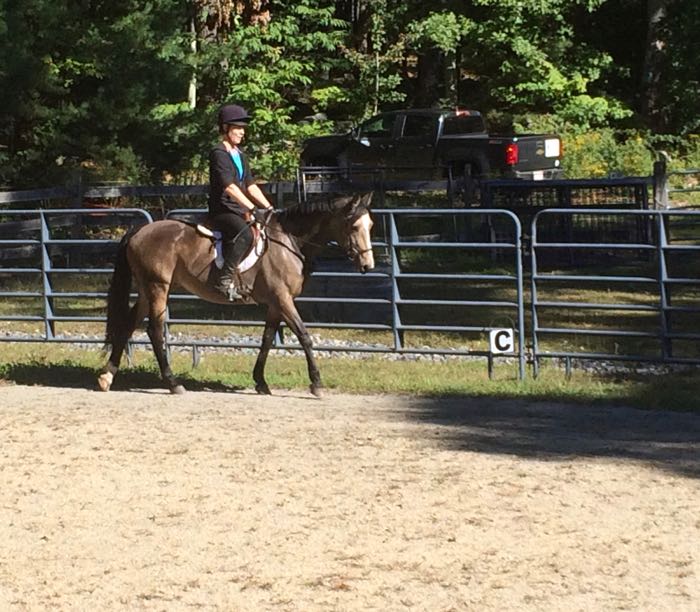 I led Hayden in her footsteps. At first we were on opposite sides of the area. Hayden walked quickly, and I let him, keeping a steady but light contact on the lead. I fed him some handfuls of hay. As he calmed, I changed my pace and Hayden, although fascinated by the mare, stayed in tune with me. This was a very good sign! 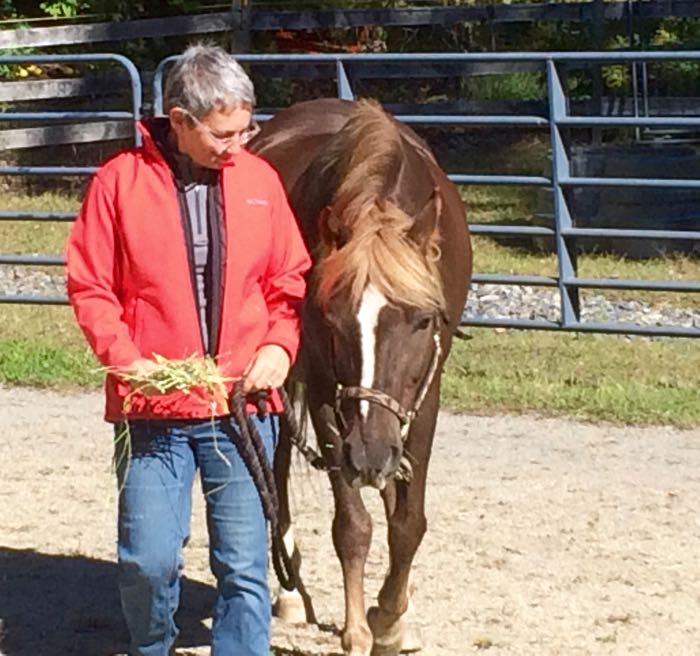 So we walked closer. 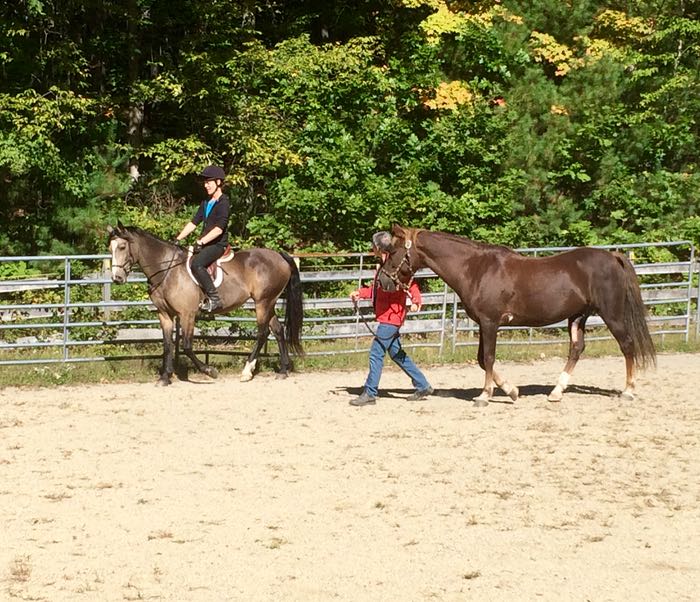 Notice that Hayden is “dropped” (his penis is out of its sheath.) This can be a sign of a number of things, and the reasons differ with each horse. In this case, it’s not sexual arousal. Hayden drops when he’s thinking and when there’s a task to do. As Hayden got used to Fairy in his space, and understood that all he had to do was to walk and look at the mare, his penis retracted.

Now that Hayden was following calmly, I wanted to see what would happen if I led him away from Fairy. I was pleased that he didn’t fuss or try to return to her. (Although he did drop, so I know that he wasn’t blasé about the situation.) 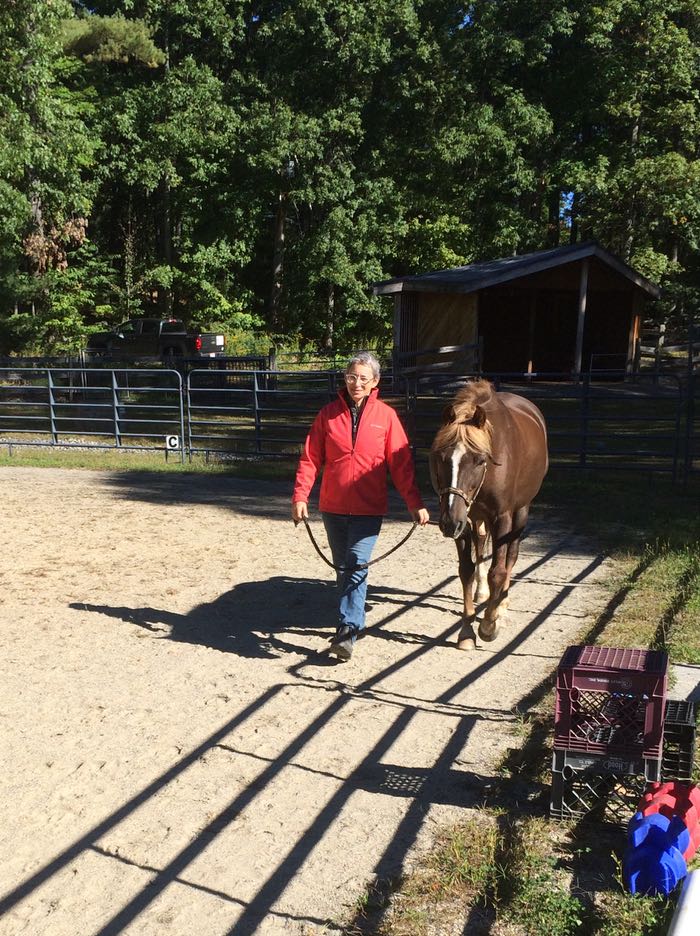 Once we knew that Hayden could walk calmly in the same ring as another horse, Susan took the line. He paid attention to his person and not Fairy. Excellent! 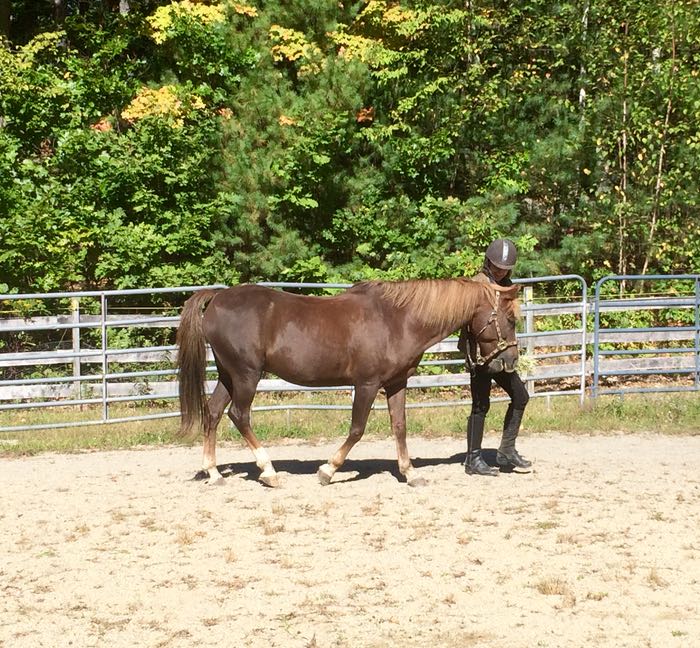 After about thirty-five minutes it was time for Fairy to leave. Now came the big question – would Hayden get upset that his new horse acquaintance was going out of sight? I imagined various scenarios, from loud whinnies to pacing the fence line. I brought Hayden back to that safe patch of flat ground. Susan gave me special leafy hay that Hayden loves but is rarely fed (too rich for regular consumption.) Hayden watched while Fairy serenely headed out the gates. I fed him the hay. He neighed once. Fairy was gone. I took Hayden’s halter off. He ate some hay. 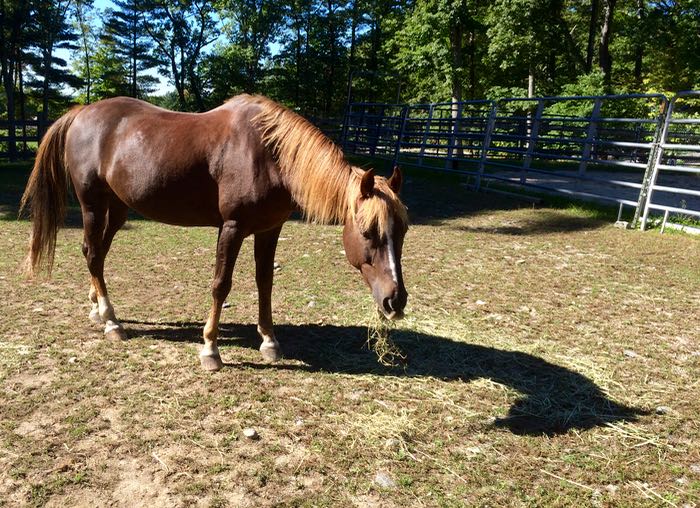 He went to the side of the barn to drink from his trough. Hayden didn’t look for Fairy.

We learned from this that Hayden is capable of behaving sanely around another horse, which is a good thing in itself. But what left Susan and I grinning was Hayden’s calm demeanor when Fairy left, which confirmed that Hayden is perfectly content on his little farm with his goats, his dog and his person.

Amy is bringing Fairy back next week and we’ll try Hayden under saddle in the ring. If that goes well we’ll be exploring the trails with Fairy before the snow falls.