Note: this blog is the second in a continuing series about training Bailey, and her person, Lisa. You might want to start here.

Lisa’s barn is a 2+ hour drive from mine, so I can’t get there on a weekly basis. My first visit was at the beginning of July. I met the two of them and evaluated the situation. I’d been called in because Bailey had become barn sour. Lisa couldn’t ride her down the trail. A thousand-pound horse that refuses to go where you want is dangerous to be on.

Lisa and I started with the work that I describe in this post. We also led the mare for a walk down the path that spooks her. I wanted to see what Bailey did when worried. While walking, I talked about the threshold point – which is when an animal is overwhelmed and becomes reactive. Dogs at threshold often bark and threaten to advance and bite, but horses would rather put distance between themselves and the scary things. Of course the person prefers not to be riding an animal that is galloping off in a panic and does what she can to stop her horse, usually by hauling back on the reins. But the horse desperately wants to go, and so the behavior escalates to actions like bucking and rearing. To stop that, the rider pulls harder and often uses a whip and spurs. Now the horse is frightened not only of what is ahead, but also of what is on her back. This doesn’t teach a horse to walk calmly, rather it convinces the horse that the place where this drama happens should be avoided, and so the barn sour behavior worsens.

What horses really want is to get along. They are communal, cooperative animals. As a trainer, I want the horse’s accommodating nature to shine and so the first step to fixing barn sour behavior is to figure out where the threshold is. Being observant is key. 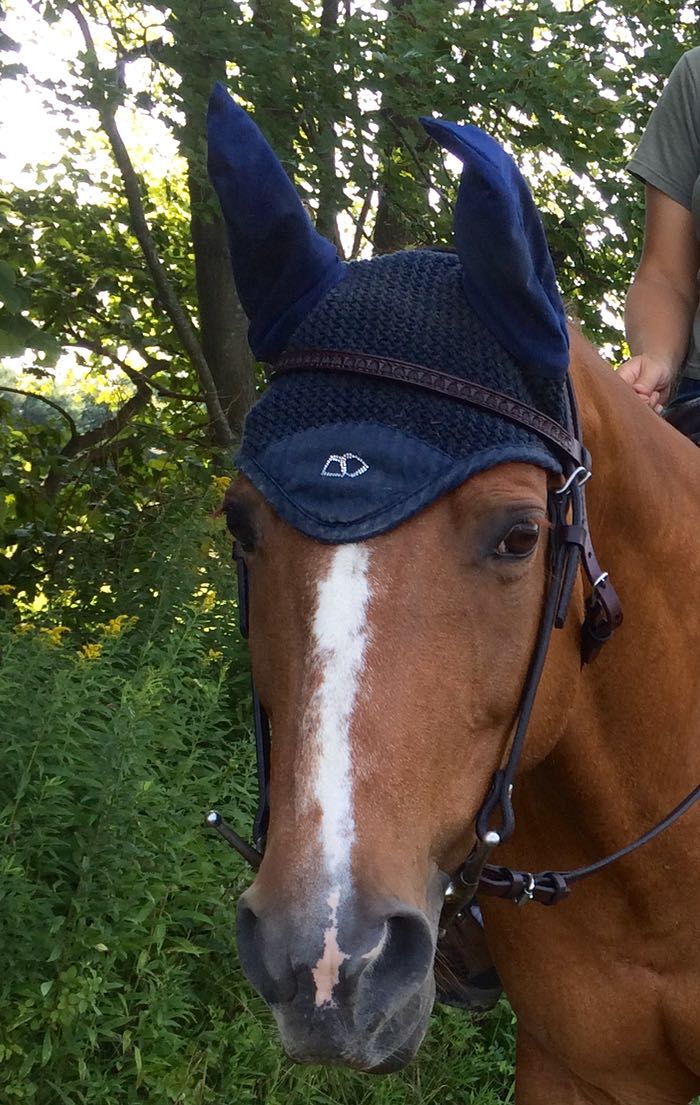 Although it’s said that a horse is a flight animal, the truth is that a lot happens before the horse runs. When a horse becomes aware of a possible threat they stop to assess the situation. They look with a head held high which allows them to focus at something in the distance, and then they take deep breaths in order to smell what it might be. Next, the horse will check in with other horses that they trust. Do they think it’s dangerous, too? There’s always one horse that the group relies on. I call this the rooster horse – the one who both alerts the others to danger and also gives the all clear signal. Tonka is that trusted sentinel at my barn. Here’s an example – I watched what happened after a tree snapped in the woods with a loud crash. Six horses stopped in their tracks, lifted their heads and stood stock still, poised to take off. But they didn’t. They looked over at Tonka. Tonka took a whiff, listened and looked. Then he went back to his hay, and everyone else did, too. 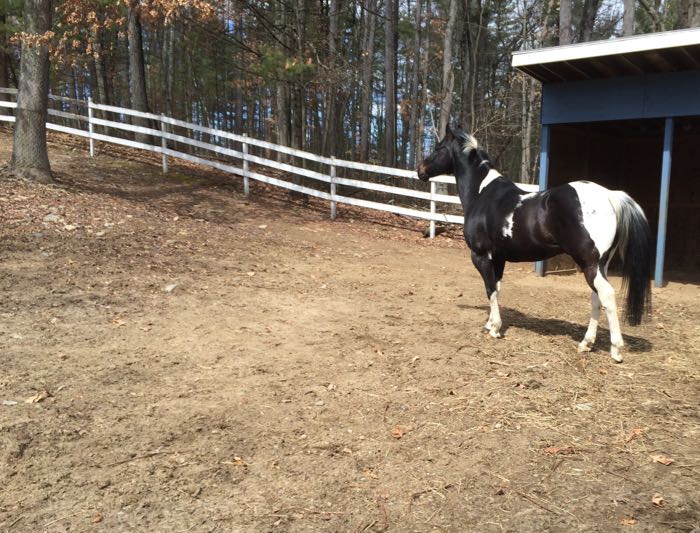 We can be that steadying presence for our horses. As Lisa and I walked Bailey towards the woods, I held Bailey’s lead rope. I watched her eyes, her ears and the tension in her lips. When I could feel her concern build I stopped, told her that she was very brave, and let her graze, using the newly taught graze cue. Then we walked a few steps back in the direction of the barn. This is important! I was letting Bailey know that I respected her concern and that I was not going to force her to do something dangerous. When she fully calmed we turned back to the trail, away from the barn, and walked on. Bailey quickly figured out that good things (grass, peppermints and praise) were happening when she headed away from the stable. While doing this I used the newly taught head up and let’s go cues. Not even fifteen minutes in, Bailey’s behavior changed. If something worried her, instead of tightening her muscles and bracing, she looked to me for reassurance. I saw this in how she turned her head, moved her eye, and how her ear swiveled to me. I pointed these tells out to Lisa so that she could recognize what Bailey was saying.

Soon, we no longer had to stop and turn back to the barn. When Bailey checked in with me, I murmured something reassuring and we walked on. We got further than they’d gone before, all in a relaxed manner, and that was enough. We walked back to the barn. I left Lisa with homework of solidifying the leading, grazing and head up behaviors. I advised Lisa that at the first inklings of tension, to lead Bailey back to a safe place and then begin again.

Two weeks later I returned. This time Lisa got in the saddle. We started in the indoor ring where Lisa and Bailey are both confident. They did fine. I tweaked Lisa’s position so that she could communicate more effectively via the reins and her body. We headed back towards the woods. I walked ahead and had Lisa ride Bailey up to and around me, where she stopped and rewarded her mare with a small cookie. Then, they retreated the way they came while I walked further on. I stopped and once again they came and walked around me. This is the classic “two steps forward, one step back.” Bailey quickly caught on that she wasn’t going somewhere scary, she was simply walking down the path to me. She was learning that very good things happened when she headed away from the barn. Lisa was learning to look up to where she wants to go, to keep her body plumb and her hands quiet. It was lovely. 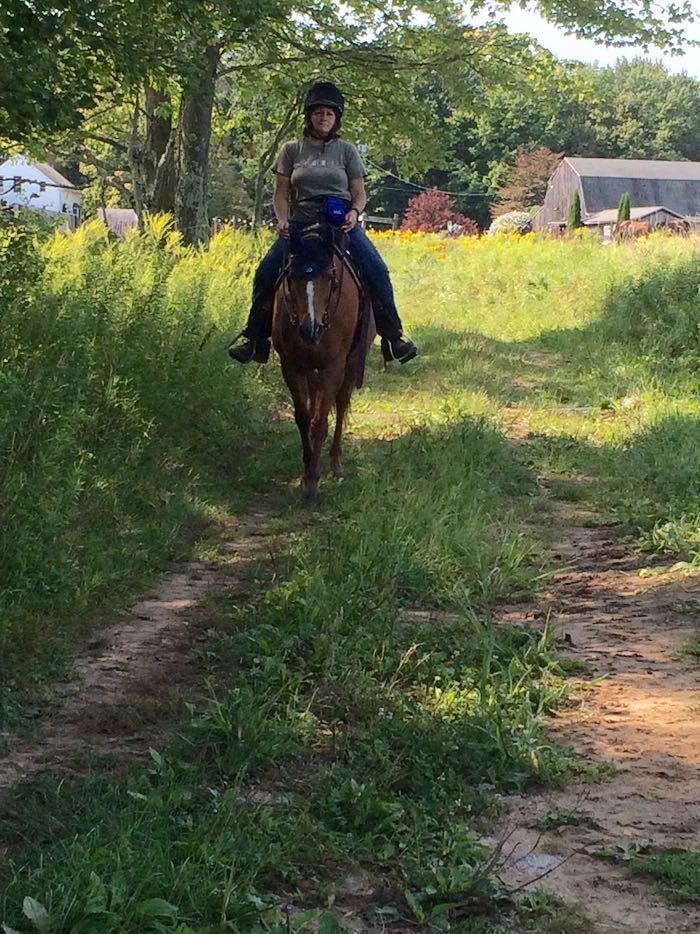 Bailey has years of behavior patterns and fears to rework. It takes more than a couple of sessions with me to fix it, but we’re well on our way! In the next post about this team, I’ll show you what we did next.