Tonka was sold to me as a horse that was safe out on the trails alone and that’s been mostly true. Of course, no horse is spook-proof 100% of the time. It turns out that although Tonka doesn’t bolt at the sight of deer, he is afraid of hopping frogs! 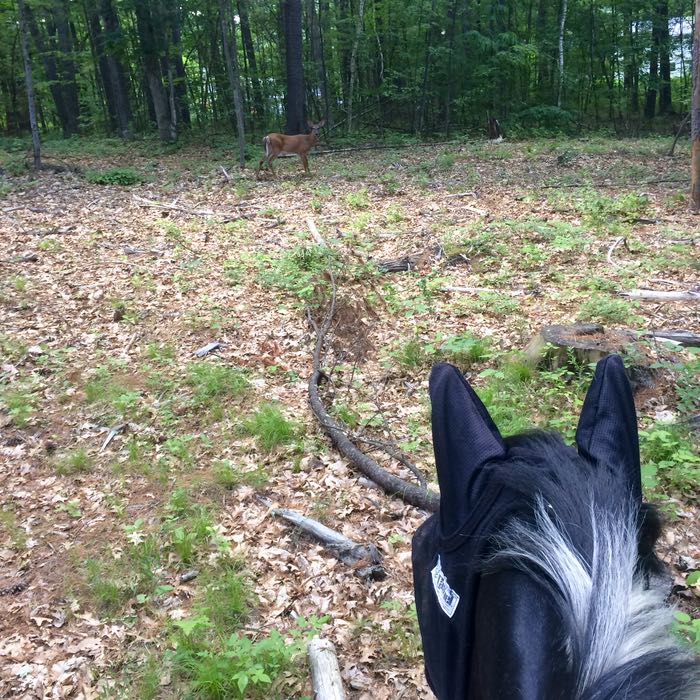 I’ve also found out that he’d rather not head down a trail if he hears a chainsaw (sensible) and that once in awhile there’s something scary enough that he’d prefer it if I got off and led him past.

Some horses are loathe to go on the trails alone. They don’t want to leave their friends nor the security of known surroundings. Perhaps they’ve had bad experiences away from home. Perhaps they’ve never learned that their rider is the equivalent of a horse friend and they they can trust their person to keep them safe. Tonka is not herd bound or barn sour. I can mount up and walk down the road and he doesn’t look back. He loads into a trailer alone and heads down unfamiliar trails with a steady step.

However, this week that wasn’t exactly the case.

Four of us from the stable where I board went on a mini-vacation. We trailered the horses up to a B&B and barn in New Hampshire. Tonka settled in and seemed to be his usual calm and inquisitive self. 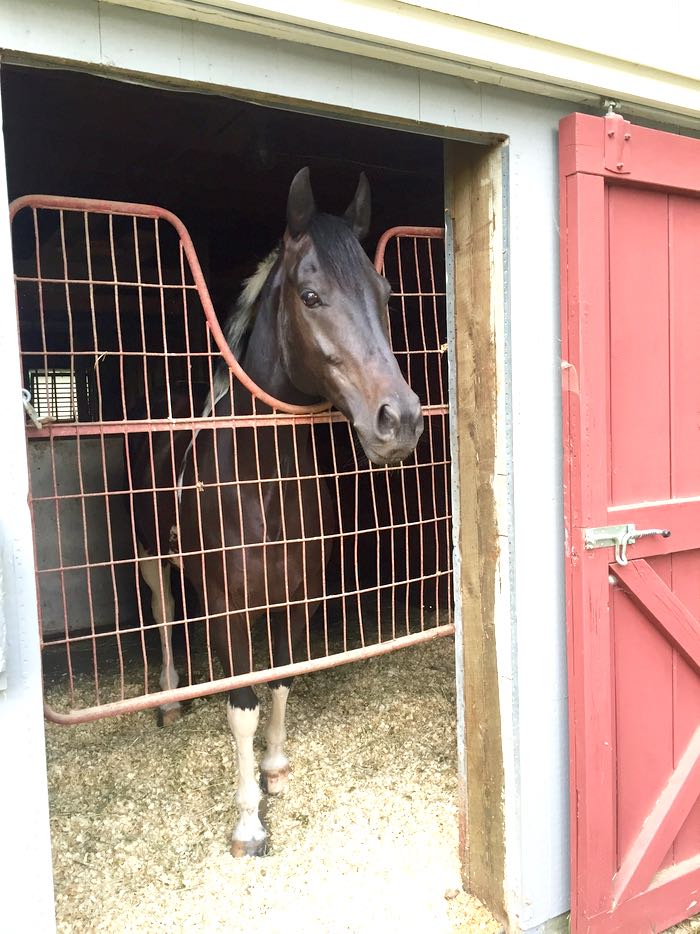 We rode out on the trails and we hand-grazed in a field at twilight. There he is with Maggie. 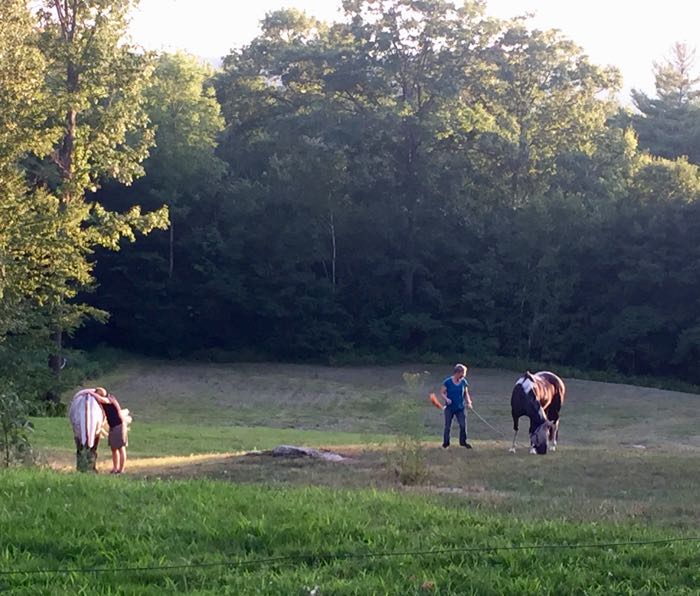 Maggie and Tonka share a paddock back home, and their stalls are next to each other. They’re buddies. We go on rides together. They enjoy the scenery as much as Michele and I do. 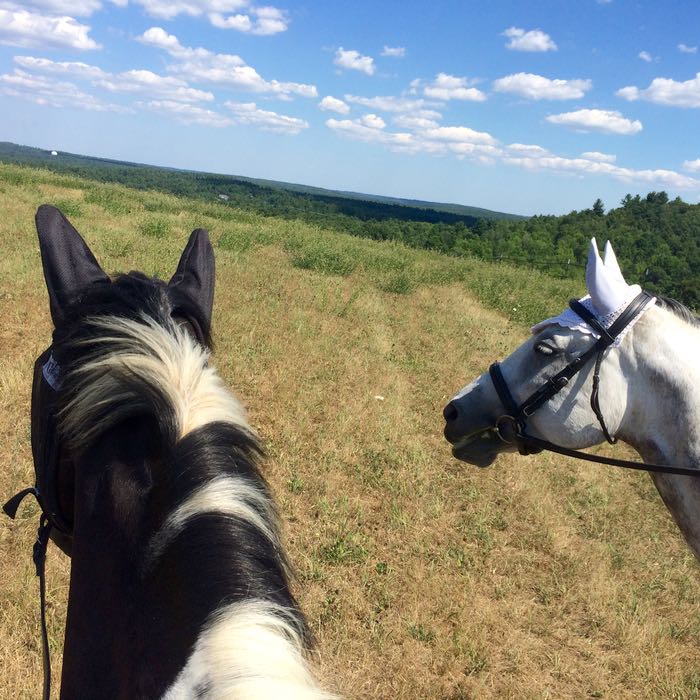 Maggie sometimes goes to overnight shows. We do not. Tonka has been left at home without her. He never fusses. Other horses can’t handle it when their best friend leaves. They holler and pace. That’s never been the case with Tonka. So it was interesting to me that at the B & B, Tonka fretted if Maggie was out of sight. In the morning I led him out of his stall to graze and he balked at leaving the barn aisle. He wanted Maggie in view. In fact, for the entire time that we were away (two days, one night) if Tonka thought that I was leading him away from Maggie, he tensed, head high and nostrils flared. I have no doubt that if I’d tried to go out on the trails solo that Tonka would have refused and thrown a fit. If Tonka had behaved like that he wouldn’t have been bad. Nor, despite his usual exemplary behavior, would it have been out of character. Behavior is often place-specific. Those of us with dogs have all had the embarrassing experience of bragging about how brilliant our pup is, and then when we tell them to do the trick, they stare at us as if we’re speaking Martian. Often this “failure” is because we’ve asked them to perform in a physical space that is different from where they usually train.

Here’s a classic example: it took me only a few repetitions to teach Lily to sit. I thought that both of us were geniuses! Steve happened to be in the dining room, and I told him proudly what Lily had learned, and that I’d show him. Lily was at my side.  I said “sit!” and Lily ran into the kitchen and sat on a purple rug by the door, which was where (and only where) we’d practiced that behavior. I was chagrined to realize that I had taught her to “sit on this specific mat.” I had not taught her to “sit right where you are when I say sit.”

Tonka has learned to be a sane and confident solo trail horse, but only when we leave from our home base!  Tonka has not spent a night away from his boarding stable since I’ve gotten him. I had underestimated how stressful being in a new barn would be. He glommed onto Maggie in a way that he hasn’t done before. At home, Maggie can be out on the trail, and we can be riding in the ring, and he doesn’t fret. Or she can be in the barn and Tonka won’t hesitate to get into the trailer and leave the property. 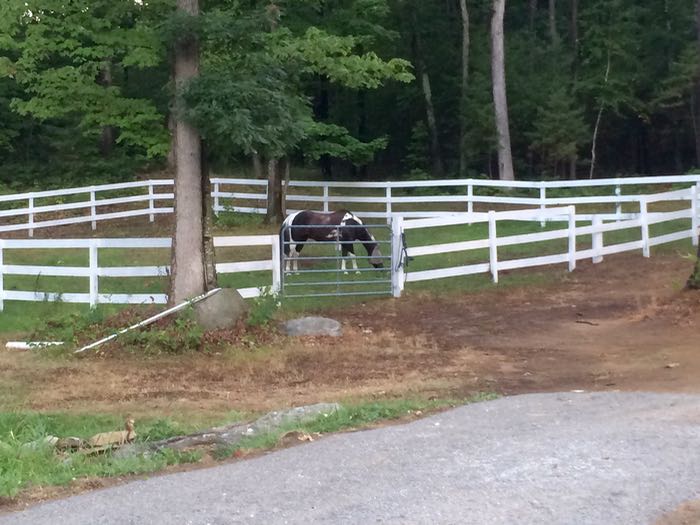 Here is Tonka, turned out in the evening while all of the other horses are indoors. If I had tried to do this at the B & B he would have worked himself up into a lather.

This short vacation showed me that I have some training to do. Tonka has to become as secure at leaving Maggie when in a new place as he is at home. Michele and I have talked about this. We’ll start by going out together and incrementally having them walk further and further away from each other. We’ll let them return to each other before they fret. We’ll reward them (cookies! grazing!) for calm behavior. We’ll walk one horse out of sight and return, gradually lengthening the time that they’re on their own. At home the horses know that their friend will be there when they return; they need that same confidence in unfamiliar environments.

It’s a good excuse to get out on the trails. We’ll be walking through a favorite orchard tomorrow morning.

A big thanks to Trina for the photo of Tonka in his stall, and of Maggie and Tonka grazing.

4 thoughts on “Tonka Frets and What To Do About It”