The stuff that a horse wears so that a rider can securely sit on his back is called tack. Putting it on is called tacking up. I enjoy a style of riding called dressage, and for that and the frequent trail riding that I do, Tonka wears a saddle and bridle that look like this: 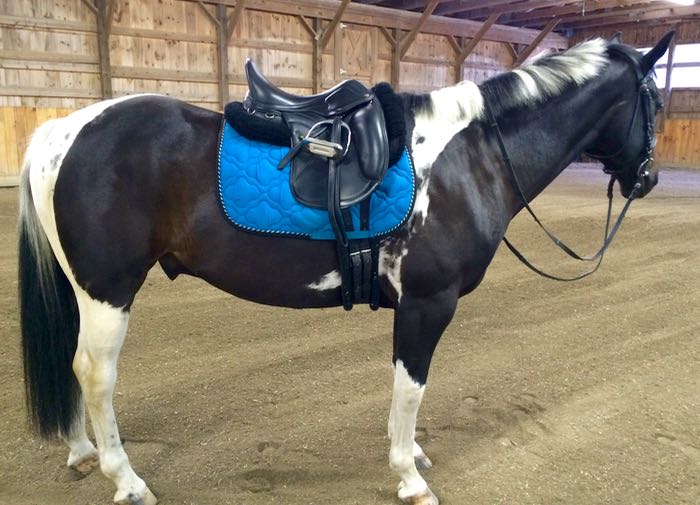 There are as many styles of tack as there are styles of riding, and within each discipline, there are all sorts of doodads and pieces of equipment that one can buy. I like to keep my gear simple. What Tonka has on is fairly basic. But it’s not simplistic! A horse can’t go happily with a rider on his back unless what he wears fits and is kept clean and supple.

A saddle is strapped onto the horse with a band called a girth. The girth sits behind the horse’s elbows. All parts of a horse are sensitive, but this belly area is especially so. Saddles and girths need to fit the individual horse. A bad fit is comparable to you walking around in stiff shoes of the wrong size. Pretty soon you wouldn’t want to move. Also, some horses are fussier than others. Just like some people can’t stand tags inside of their collars (one of my sons could feel a label of a snowsuit through a shirt and sweater) some horses can’t bear to have a girth of a certain material or shape. After some trial and error, I found the one

that Tonka likes. (When he didn’t like a girth, he wouldn’t let me get on!) He also wears a sheepskin saddle

that is custom fit for his high and sloping withers.

Even with the tack carefully adjusted, some horses have issues when being girthed up. How you put the saddle on the horse is as important to their comfort as how well it fits. I met Lucky at my clinic in Connecticut. He’s a sensible and calm horse, however, he experienced years of someone slapping a heavy western saddle on his back and roughly pulling the cinch up tight. By the time Laura, his current owner got him, he’d had it.

Here is Lucky telling us as loudly as he could that he is afraid of the pain that inevitably happens when the girth is tightened: 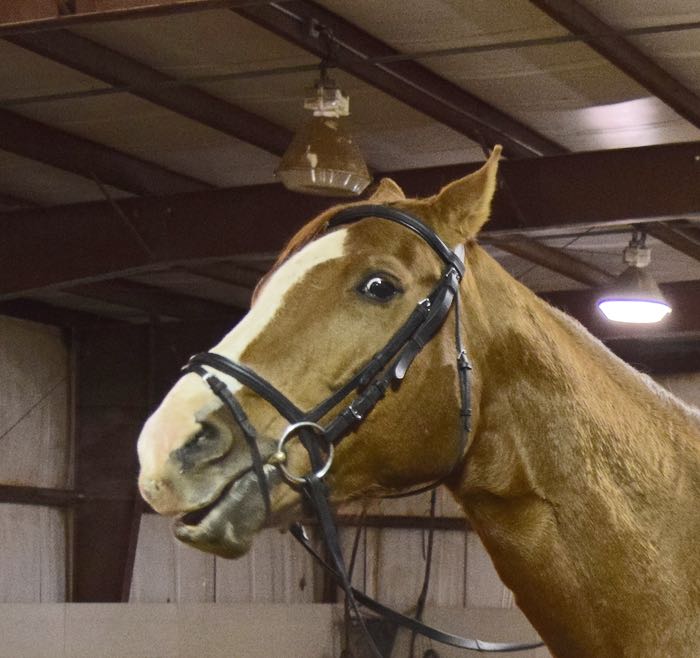 Pinned ears. Wrinkled nose. Grinding teeth. Whites of the eyes showing. Head up and tense. Although his current saddle has been fit properly by a professional, Lucky has a long history of pain. It’s not enough that his tack no longer hurts. Now he has to trust that things are truly different.

Lucky is lucky. Laura is as kind as they come. But, by the time she got him, Lucky didn’t just threaten with those pinned ears, he bit. She had welts and bruises to prove it. Laura is a loving but novice horsewoman. She’d been told to not let Lucky get away with that behavior, and to back him off with a whip to protect herself. So, the pattern became: Lucky threatened her, then she threatened back. He bit, then she hit. This sort of dynamic always escalates. It never stops a horse from biting, nor does it make the owner feel safe. It did make Laura feel terrible. She loves this horse but didn’t see a way to put the whip down. She’d also been advised that when tacking up, she should wait for Lucky to look calm, then tighten up the girth. That sounds nice, but behavior science tells us that consequences drive future behavior. Lucky learned that if he relaxed, that the dreaded girth was going to be pulled up. In effect, Laura was punishing the very behavior that she wanted.

I changed this dynamic with careful observation and a few cookies. Although Lucky wasn’t about to let his guard down, he couldn’t keep the tension going without a break. After Laura set the saddle on Lucky’s back, I watched for those micro-moments of relaxation. A flick of an ear to the front and I murmured good boy and gave Lucky a cookie. When his nostrils went from three creases to two, good boy and a cookie. I didn’t pat him, because I noticed that the action of my hand going to his neck was perceived by this horse as a threat. (Always reward for what the horse likes, not what you think they should like!) Soon, Lucky’s head lowered and his eyes softened. That brought him a good boy! and a big chunk of carrot. In this way I was able to tell him that relaxing would not bring pain. Once Lucky understood that, I needed to show him that the girth no longer hurt. While I stood at his head, murmuring sweet nothings to him, I had the owner tighten the girth up one hole. Lucky’s head raised up, but one ear flicked forward. Cookies. We repeated this. Took a break. Brought the girth up one more hole. Soon, Lucky was tacked up and calm. Laura was so relieved that she could put the whip down, that she was near tears. To make girthing up an even better experience for Lucky, I advised purchasing a longer and softer girth, which Laura has ordered. (In the below photo notice how the buckles are right at the bulge of his elbow. A longer girth will alleviate that pressure.)

How generous is this horse that after years of the fear of pain, that he is still willing to believe that there is good in the people around him? 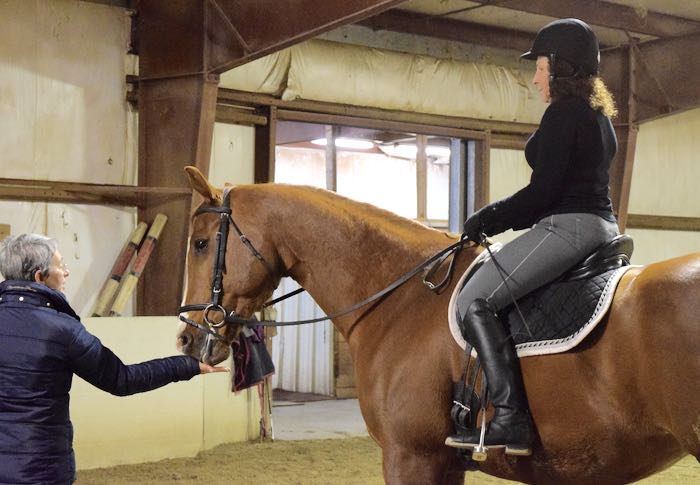 Lucky showed no tension when his owner got in the saddle. That indicated that the tack fit and that we could proceed with the riding portion of the lesson. But it became immediately clear that Lucky had learned that going forward was also all about threats and pain. He moved with reluctance. Instead of walking on when Laura squeezed with her legs, Lucky braced and worried about what was next. Because he didn’t move, Laura did what she’d been taught – she kicked – and when that didn’t get Lucky to move, she used the whip. What Lucky had been anticipating and bracing against came true. Both horse and rider were frustrated. We changed that dynamic, too. Like with the girthing up, we stopped punishing and started rewarding. By the end of the lesson, a gentle press by Laura’s calves became a cue to move on, not a threat of being stung by the whip. (How I did this took timing and skill, and I’ll have to cover that in another post.) Soon Lucky was walking on and happily cooperating with what Laura was asking of him.

Doesn’t it look like he’s saying, What’s next? Let’s do it! 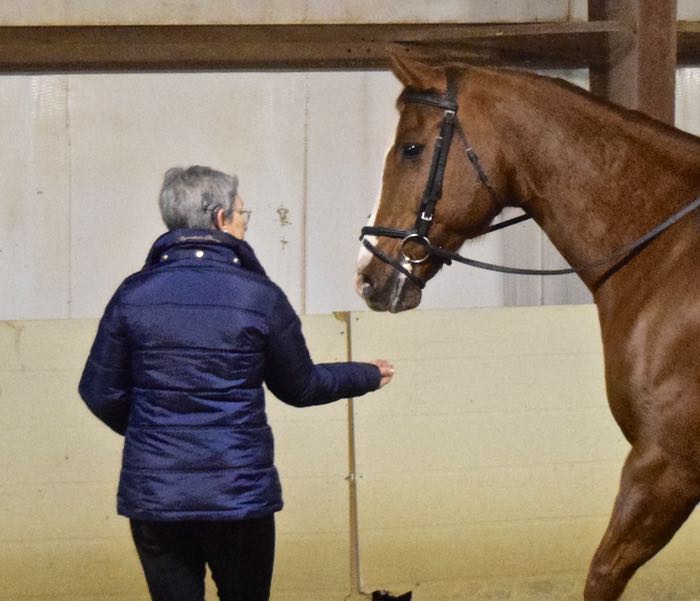 You can’t change years of history in a morning, but you can change the approach. Now Laura better understands what Lucky is telling her and respects his fears. He’s no longer afraid to relax, and under saddle he’s rewarded for going forward, not punished for being slow. One week later, Laura reports:

We are making great strides (pun intended!). I’ve noticed a big difference beginning with blanket removal, and girthing is much better too. The entire process takes a lot longer, but I feel that without the time investment we will not progress. I can’ t believe how much that one clinic has helped!

I’m eagerly looking forward to my next visit with this good horse and kind owner.