I’m a big fan of BBC mysteries, especially the “cozy” dramas that aren’t too bloody, but are more Agatha Christie-like character puzzles. I’m currently catching up on the last season of Endeavor. One of the reasons that I love these shows is that the production values are high and that the period details are accurate when they’re set in past eras.

Which is why, at first, I was filled with happy anticipation when in the first scene of the show there was a fox hunt. I was relieved that the horses weren’t all Freisans (as seem to be all the rage in all television and movies these days) and that the tack looked appropriate for the year of 1969. Back then, they didn’t use saddle pads, and there were almost none in sight.

But then… this parlor scene came on. It’s directly after the fox hunt. The man on the left had been riding, and then got off and walked a lame horse home. The other man in pinks, and the woman seated on the right, had both ridden to hounds for hours. I paused the show and started shouting at the television. Do you see what I see? 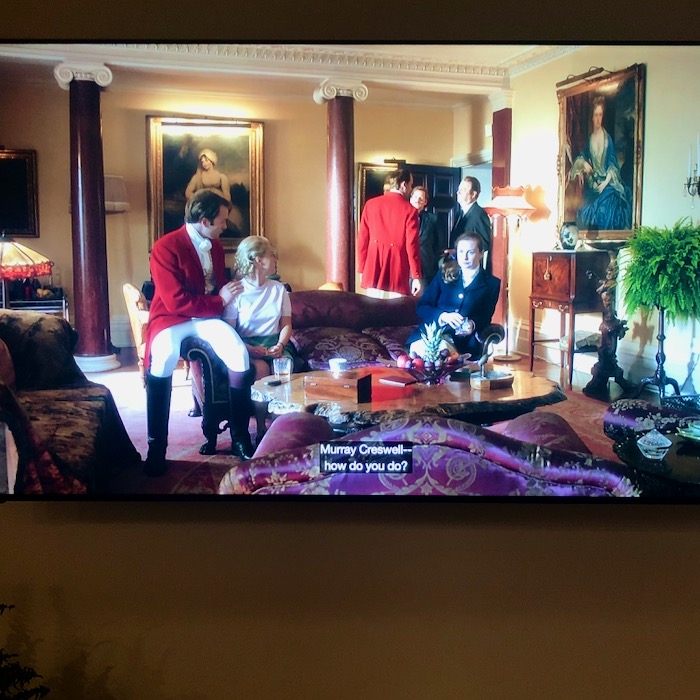 First of all, none of the three “riders” has helmet hair.

Now look at the man’s breeches. They didn’t have stretch white breeches in 1969! The only material available back then was stiff twill. Who’s old enough to remember wearing those??? With the button closures at the calves? Two-way stretch arrived in the late 1970s, and they were bulky and had real suede knee patches.

In any event, even if there were stretchy white breeches back in 1969, after a few hours of riding and then walking, would those breeches still be that white? This is England. There was, surely, mud.

AND LOOK AT THOSE BOOTS! (Okay, I’ll try not to shout at you like I shouted at the television.) Perhaps his valet wiped them clean when he arrived home? While everyone else was grieving for the father shot dead in the hunt field? Look closer at the insides of the boots. No one polishes the insides of their boots black – it would rub off on the tack and horse.

I was able to calm down and enjoy the rest of the show. It helped that Steve made popcorn. Or at least it kept me from making comments.

I remember, forty years ago, seeing The Electric Horseman in the movie theatre. Robert Redford’s horse was supposed to be a thoroughbred, but for most of the scenes it was obvious that a quarter horse was being ridden. Actually, there were several horses used, and if you knew anything about conformation it was obvious which was which. I went with an equestrian friend. We were shushed.

Have you had to be shushed when you saw an egregious equestrian error on the television or at the movies? Tell me about it in the comments!

16 thoughts on “(Not) Horse People on Television”