In August, I shared (in this blogpost) how Tonka was moving when I rode him. Instead of clear two and three-beat gaits, with moments of suspension, Tonka was altering his strides so that he didn’t put his full weight on his hocks and stifles. He was also moving so that he wouldn’t have to use the base of his neck for balance.

It was unclear if Tonka was going like this because of permanent issues with his sacroiliac joint, hocks and neck. It’s not like he was in constant pain. Tonka was perfectly content going for walks and doing easy ring work, but anything that required athleticism was more work than joy. Horses are creatures designed to move. Left to themselves, most of the moving that they do is head-down moseying along while grazing, (which can add up to many miles a day), but they’ll also have a gallop, or float around at the trot, for the sheer fun of it. I had a thoroughbred mare who’d gallop off and jump things in a field just because. I didn’t know if I could get that feeling under saddle from Tonka, but at the least I wanted him to feel that good when turned out.

The “fix” would be multi-pronged. Two months ago, my veterinarian injected his neck to lubricate the vertebrae that are a tad jagged. With that pain relief, I’d be able to up the workouts designed to strengthen the muscles in his stifle and over the SI joint. We walked up and down hills, then cantered them. We did exercises over poles, and then raised cavalletti. When doing our dressage schooling, I slowly changed his head position from long and low to up, with an arc through the neck.

The other day, I let Tonka loose in the sand ring to check on how he felt.

He started out with an eager look. What did I want? 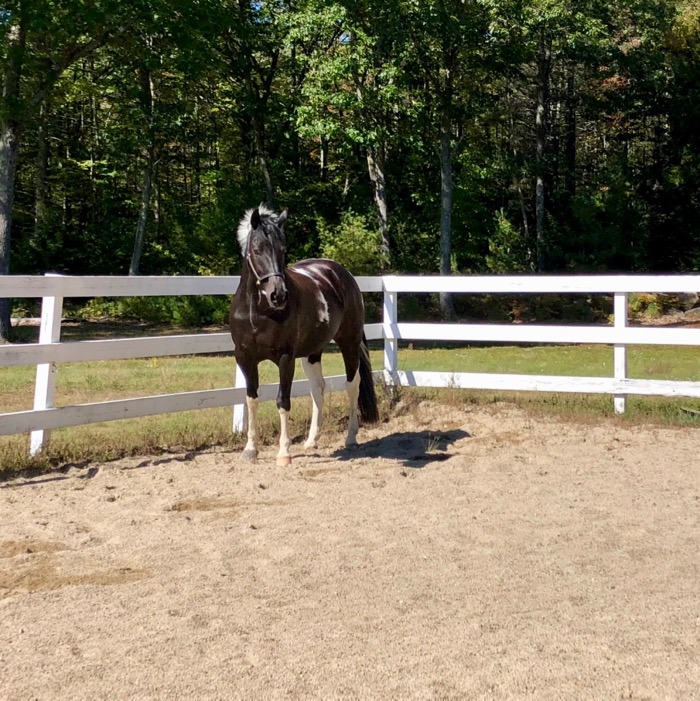 I asked him to show me what he had. Note that I didn’t carry a whip or scare him into moving. It just required a chirpy “go.” Once he’s moving, I don’t do or say a thing. Here’s a slo-mo response.

The joy is back.

This is the moment that he pushes off from walk to trot. He’s got those topline and core muscles engaged. 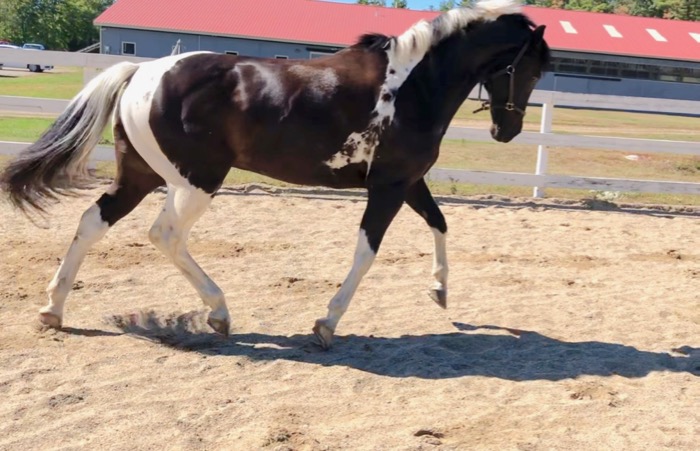 Tonka floats with his head up (he’s checking out something outside of the ring.) A month ago, those hind toes were dragging in the sand. Not now. 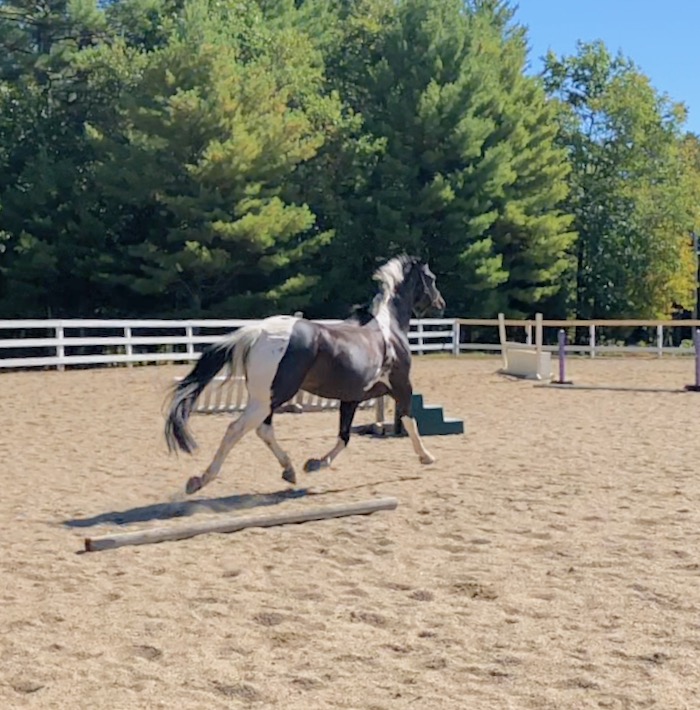 Tonka floats with his nose down. He’s articulating those hock joints without a hitch. 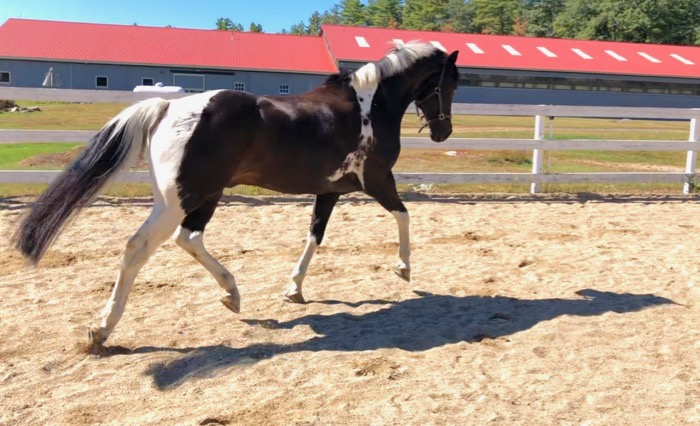 Look at that suspension. 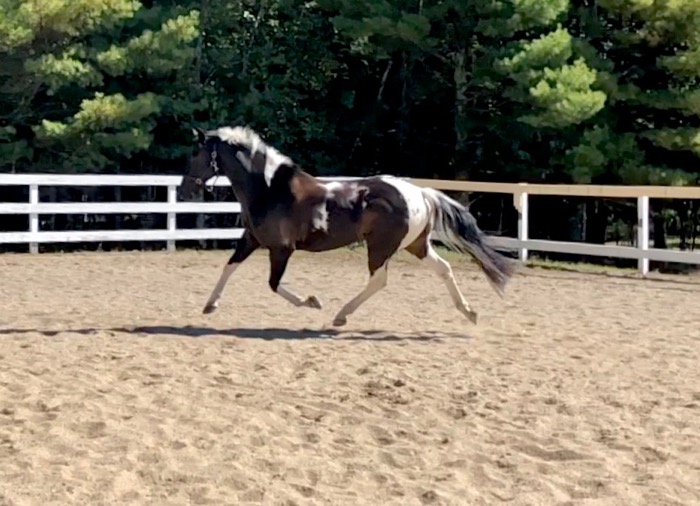 The canter has always been an awkward gait for him. When I got Tonka, he’d switch behind, and get all discombobulated. He had no stamina at the canter, and it always felt downhill.

This is the opposite of downhill. 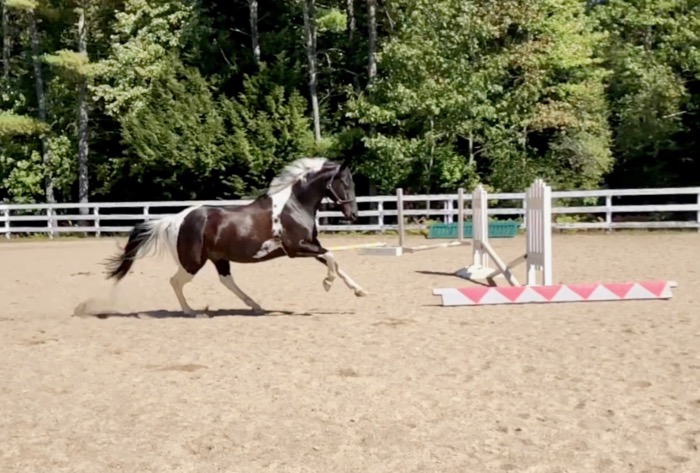 I think Tonka now feels like he can fly. 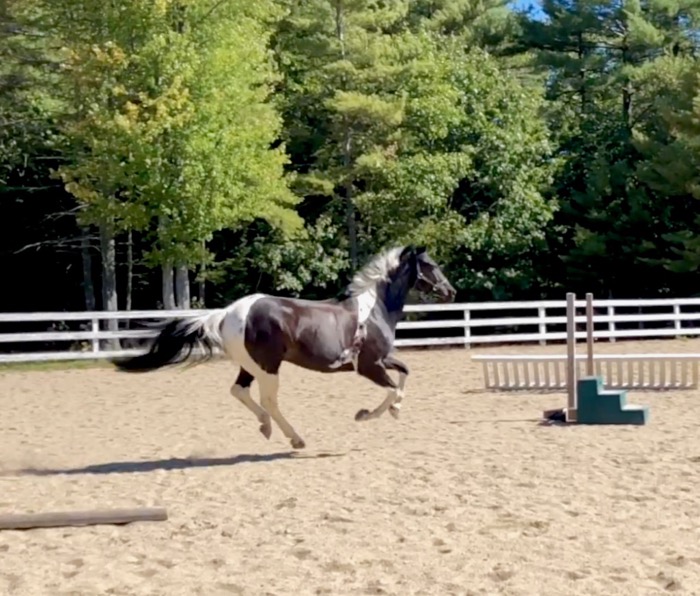 When I get on, Tonka isn’t quite so light on his feet. I’ll be writing about how I’m going to improve my riding so that I don’t interfere with those glorious moments of suspension. There are numerous components to be addressed, but one of them might be going to a gym. I need to have my core strength match my horse’s!

Do you work out so that you can be a better rider? Let me know in the comments. 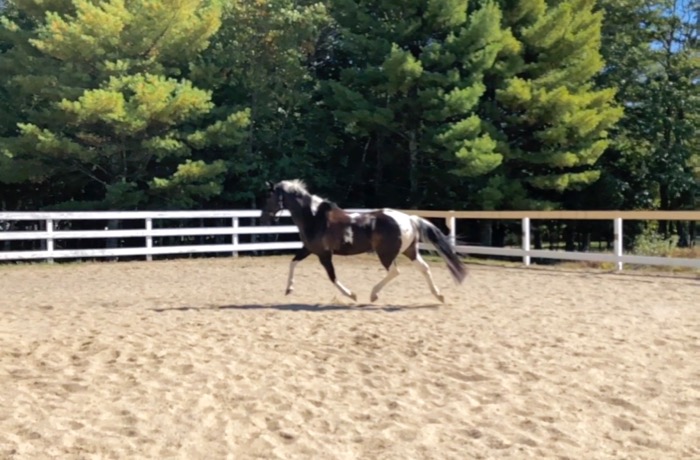 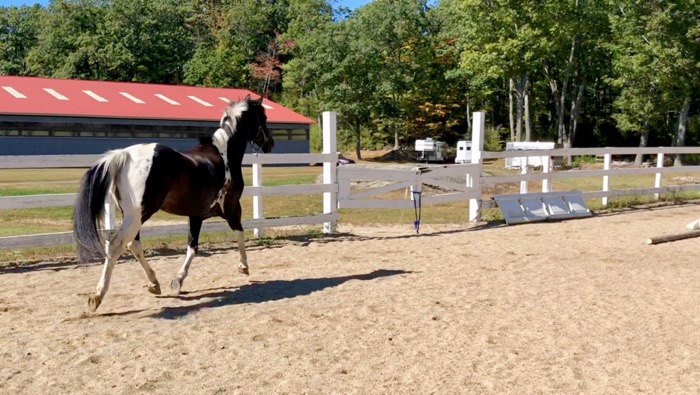