As promised in my last post, here is a link to a new piece of writing by Karen Pryor. It’s about her time on board a tuna fishing vessel. She was there to study dolphin behavior so that better ways to fish could be implemented so that dolphins wouldn’t end up dying in the nets.

At least that’s what it seems to be about. But I think that there’s far more to it than an interesting tale of adventure on the high seas.

Read her piece before you read the rest of my blog below. And then we can compare notes and see if you caught the undercurrents (pun intended!) that run through this (and so much of) Karen’s writing. 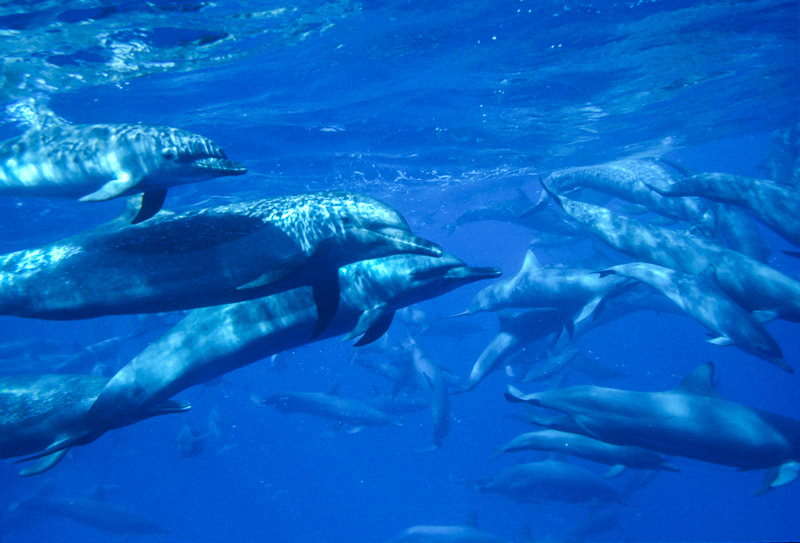 Here are my takeaways:

Imagine what it was like for Karen to work aboard the vessel, in days well before the #metoo movement. And yet she had the support of the captain and gained the respect of the crew. Reread the bit about how Karen learned not to let her cabin door slam, and how the thankful engineer offered her hot sauce in thanks. How many people would have recognized that that gesture by the crew member was an effort to reward her actions? How many people would have delighted in that interaction, and built on that goodwill? Karen observes small kindnesses and reciprocates. That sort of attitude can change the culture on a ship between scientists and crew. Many years ago, Karen pointed out to me when my dog was thanking me (it was very subtle – a brief nose touch on my thigh). Once you see that, you become aware of moments of kindness all around you. It can change how you train your animals. It can also change the world.

Speaking of scientists, when Karen was sent out to sea, no one expected much from her time onboard. The scientists before her had observed the dolphins from the deck of the ship. But Karen knew that to learn anything useful, she’d have to snorkel in the open ocean with sharks swimming below her and dolphins within touching distance. Somehow, she got permission to do this. Once there, she had to collect data. Karen not only observed wild dolphins underwater (which no one had done before, and few since) but, she adopted a new method of data collection that was scientifically rigorous and groundbreaking. The takeaway is that Karen sees a challenge, figures out what to do about it, and then does it. That sort of attitude can change the world, too.

My last takeaway to share is this: know your animal. The only reason that Karen was able to collect the data that she did was that she already had a thousand hours or more of observing marine mammal behavior at Sea Life Park, so that when she studied the wild dolphins she brought her keen eye that didn’t miss anything. Karen paid attention to more than dramatic interactions between the animals. She noted calm touches, animals resting together, and where babies were in relation to the others. She was able to see this because despite her scientific rigor, Karen also was open to the animals’ creativity, intelligence and emotional lives. The takeaway for those of us with horses? Downtime is at least as important as what you do in the saddle. Stand in the field. Sit in the stall. Take your horse for a slow walk on the lead line and let them graze. Or simply rest in the sun near your horse. Get to know your animal on their terms. Karen’s observations of the dolphins led to a totally new understanding of how dolphins behaved when trapped in tuna nets, which led to more effective protocols in the industry to protect these animals. What can our observations of our own animals lead to? Take the time to look. It might just change their world.

6 thoughts on “My Takeaways from Karen’s Writing”