I was sitting in my screened porch in my peaceful backyard when a house sparrow landed on a large sunflower growing in a pot by the steps. That wasn’t unusual, this bird often uses the plant as a vantage point. What caught my attention was that he started chirping in an agitated voice, then flew over to the raspberry patch. The little brown bird swooped low, complaining all the while, then headed up and off.

There’s always a good reason for such behavior. I looked hard, and it took me a moment to focus in the shadows, but there it was – the cause of the bird’s consternation was an immature raccoon, probably recently weaned.

If you’ve had no experience with raccoons, you probably think they’re cute. If they’ve raided your chicken coop and shredded your birds to bits, if they’ve left feces in the yard that are laden with disease, if a rabid one has stumbled onto your doorstep, you might think differently about them, and prefer that they live deep in the woods and nowhere near where you can see them.

For fifteen years I haven’t had to worry about such incursions. Lily, my good farm dog, was here. Deer didn’t dare graze in my garden. Raccoons stayed on the outside of the fence.

It’s been only three weeks since Lily died. Already, the squirrels are insouciant in their strolls across the lawn. Deer have appeared in the meadow. And now this. 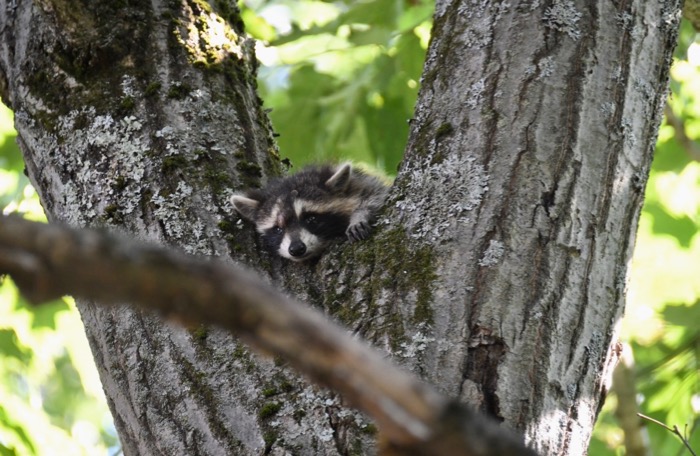 I yelled when I saw it by the raspberries. (It was foraging there, photo taken later.) 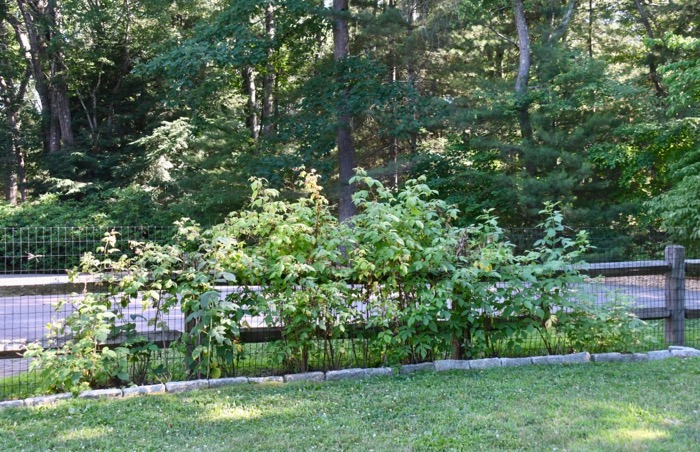 The raccoon dropped a raspberry on the way up the tree. 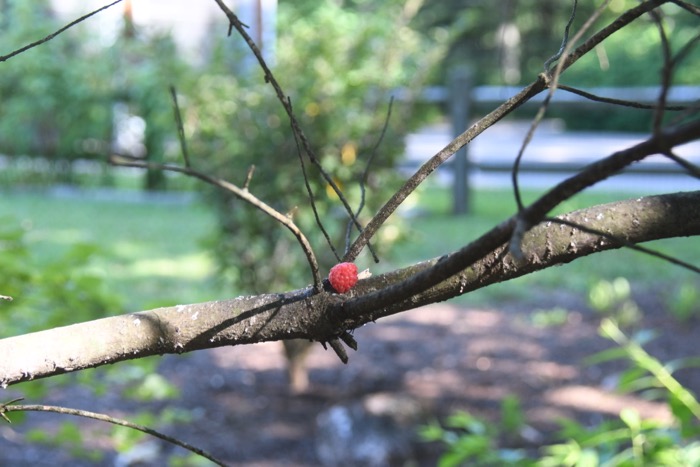 It stayed there for awhile. Literally hanging out. 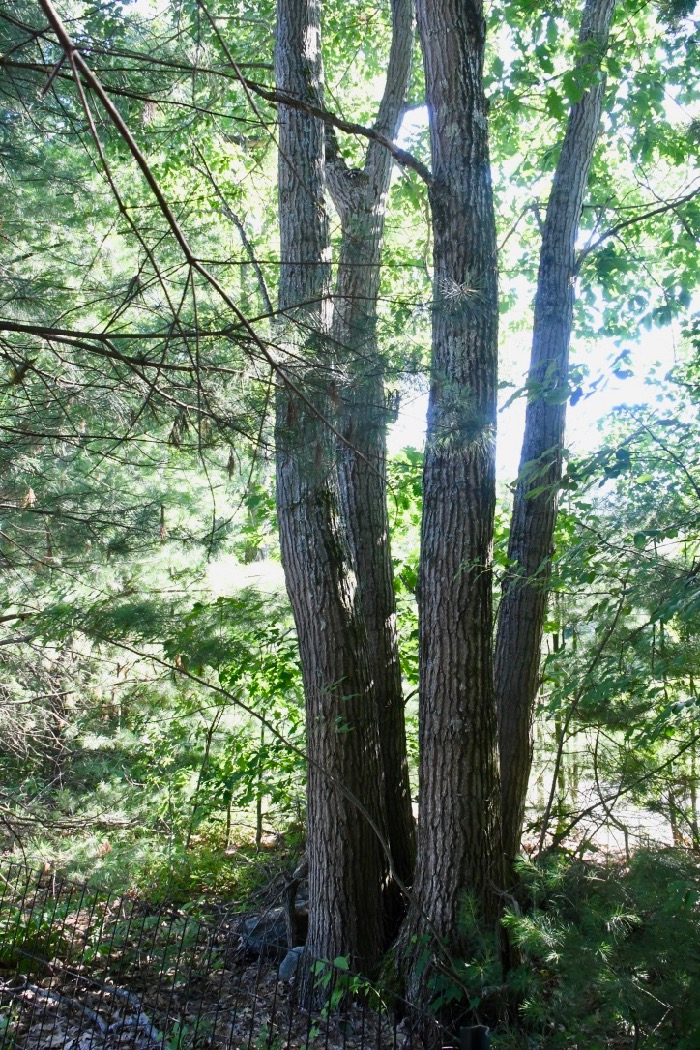 Zoom in, and you can see that there’s something wrong with the little guy’s face. It’s swollen and sore. Nature is not always pretty. 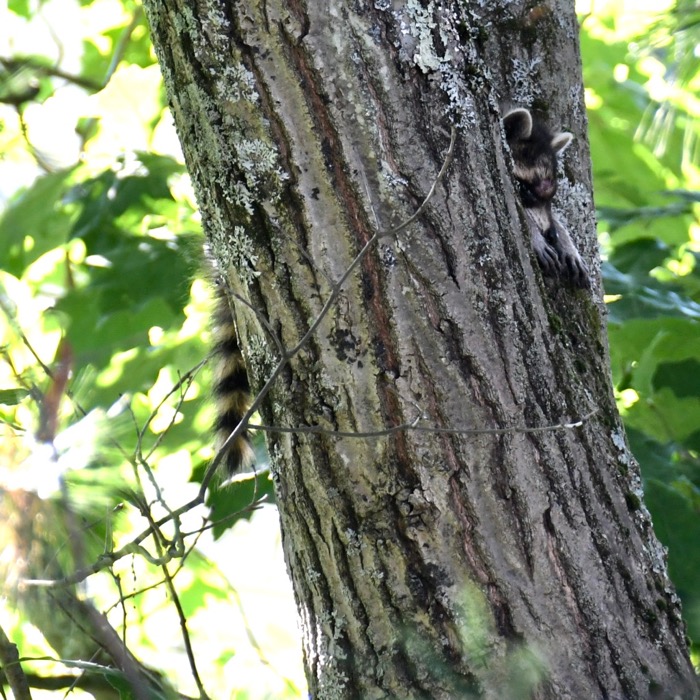 All of the animals in my neighborhood know each other. (Karen Pryor wrote a wonderful essay on this topic of interspecies communities. You can find it in her book Karen Pryor on Behavior.) The neighborhood knows that Lily is gone. They’re already filling in the hole she left in their own ways.

They also know this dog, and know that to them, he is of no consequence. 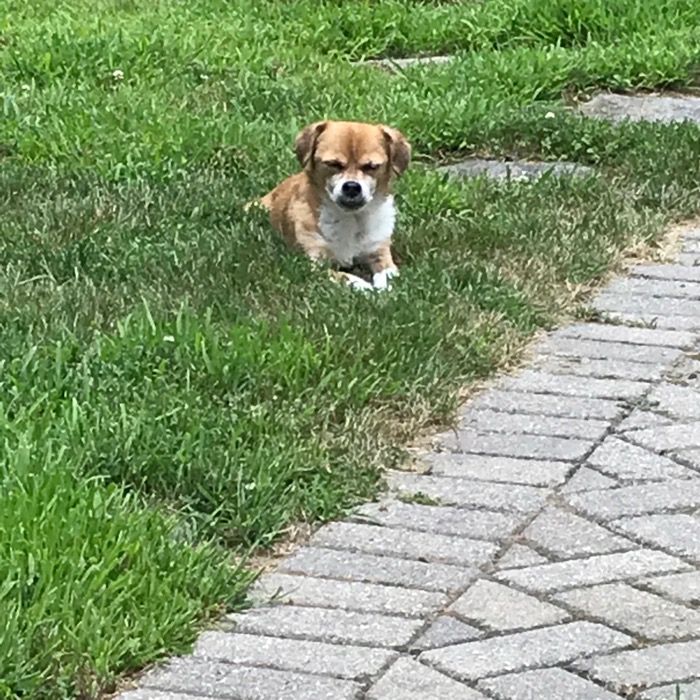 Scooter noticed the smell of raccoon in the raspberry patch, and briefly had a sniff, but that’s not his worry or his job. Now it’s mine, and I have to take it seriously. If Scooter tangles with a raccoon, he’s going to lose.

I’m not half as good at the job as Lily was. She would have known the location of that raccoon the moment that her nose was out the door. Lily would have directed Scooter to stay clear. The raccoon would have scuttled away before I was aware of it. Lily knotted a safety net around this yard, and only now that it’s gone can I see it.

3 thoughts on “Missing The Farm Dog”