Horses carry more than half of their weight on their forelegs – about 60%. But sometimes the scales tip even more to the front, and the horse ends up pulling themselves along. Going like that strains the front legs and causes the shoulder to work too hard. Put a rider on such a horse, and that imbalance can cause strain and injury.

Some horses are built “downhill” which makes “going on the forehand” their natural default. Tonka is one of those. His sire was a champion roper, and Tonka inherited the center of gravity of a horse designed to be quick on his feet. But Tonka is a tad long and weak in the loins, so even if he was a cow horse, he’d still have to be kept correctly fit to keep his back from aching. I do dressage with Tonka because it builds the muscles that he needs to stay sound (and I find the communication that comes from this sort of training very rewarding.) It’s okay with me that Tonka isn’t capable of doing the fancy moves of upper level dressage, (that takes a horse with a different build) but he is capable of motoring from behind. 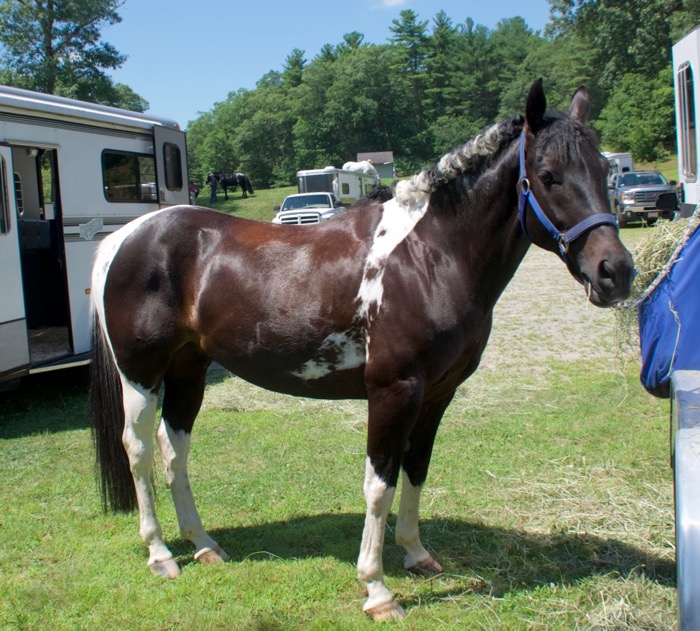 This last year, what with his neck and sacroiliac issues, I wasn’t able to keep Tonka muscled up correctly. To protect the areas that hurt, he developed a muscular bulge on the underside of his neck, and instead of pushing with his quarters, he developed muscles at the front of his shoulders just above his chest. He sagged behind the withers. Given his druthers, Tonka would prefer to walk like this: 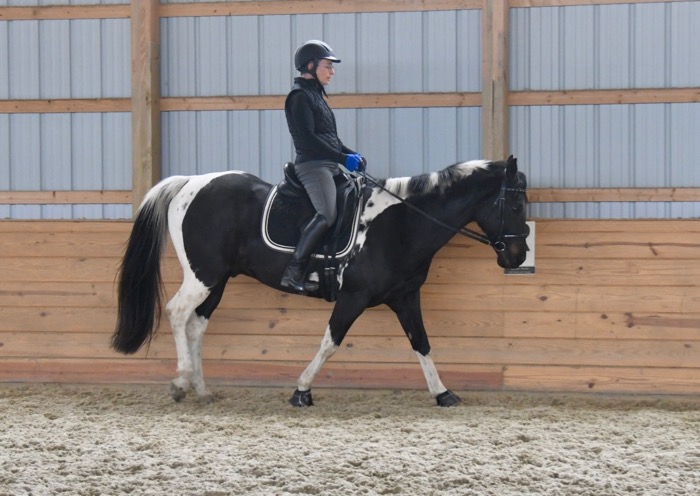 See how his back sinks just behind the saddle, and how the neck looks thick on the underside? See how short the stride is behind compared to the front?

To rework his engine, I use my body aids to get him to move more from his quarters. Riding is tactile and the communication is multifaceted. I press my legs against his sides. I use the weight of my seat. How I engage my core, where my elbows rest, and even how firm my pinkies are on the reins, affects how Tonka moves. I keep his front end from going too fast, while I get him to engage his rear.

If you’ve ever had a personal trainer or physical therapist push you to work a weak muscle, you know that this isn’t fun. Tonka complains with ears back and a tail swish. It’s not pretty. 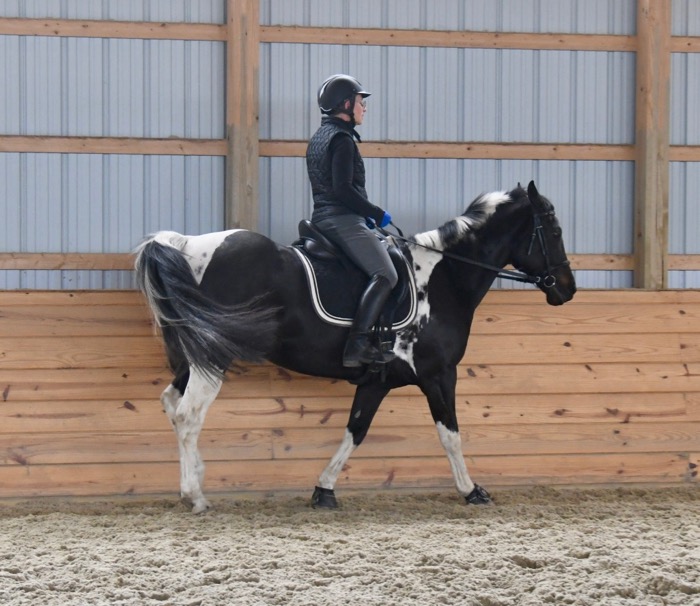 But I know how to avoid a fight, and how to make the movement feel good for him. At first it was enough to get a swinging walk, with the sort of hock engagement and balanced neck that you see in this photo. 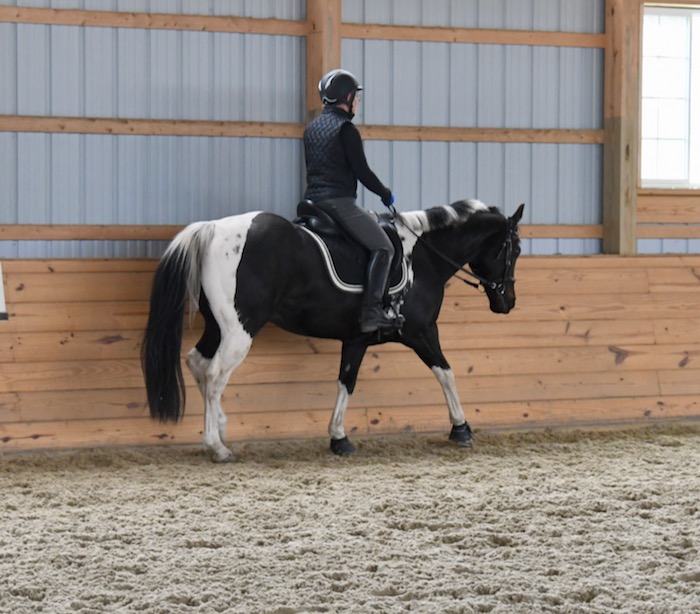 The walk is a work-in-progress. I’m continuing to shorten the stride in front, while adding energy from the rear. 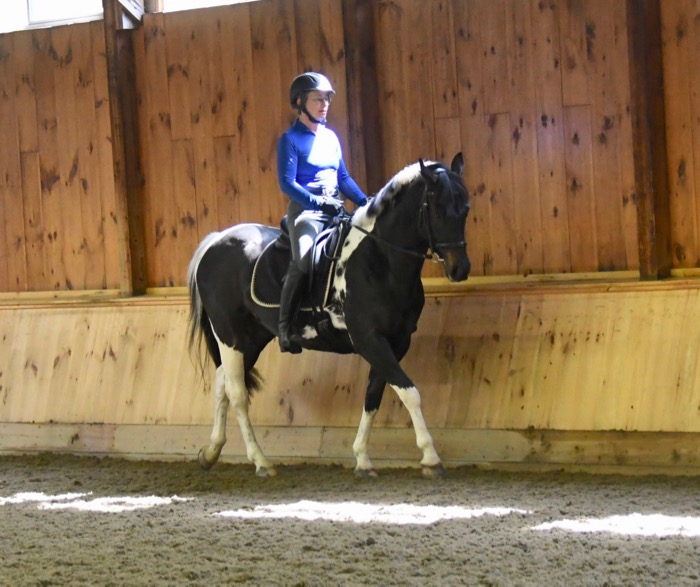 We’ve been working on the trot, too. 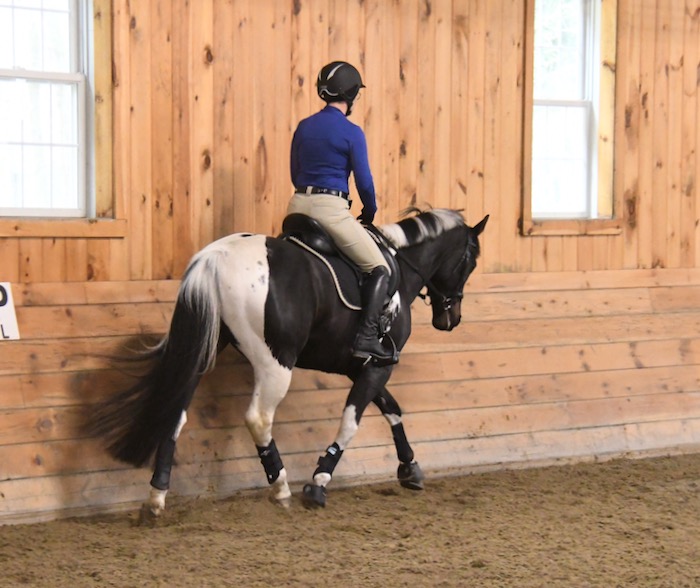 At first we had to stop frequently to both rest, and to confirm with rewards that this balanced movement is the goal. 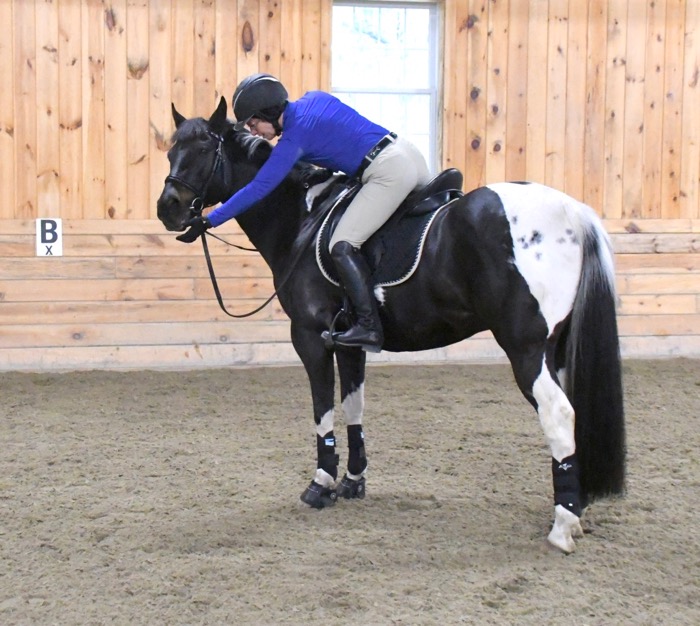 Now Tonka is able to to go longer stretches, and enjoy the flow, before taking a break. We still have work to do on the walk and trot, but we’ve recently added the canter.

Here you can see how heavy Tonka is on the forehand. Going like this isn’t good for him. 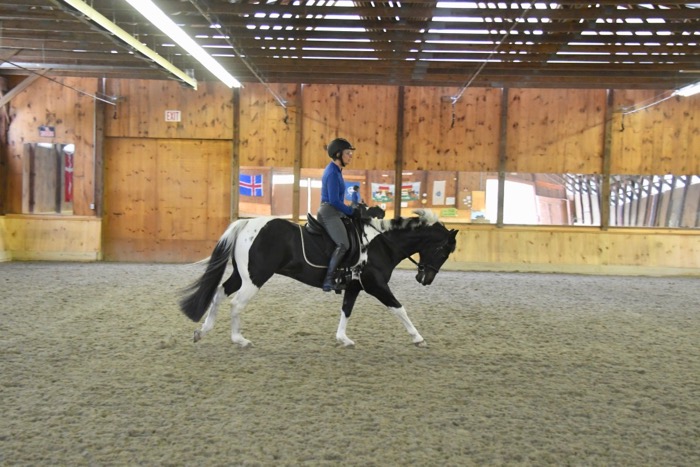 It’s hard work to build up muscles, but Tonka is listening and trying. 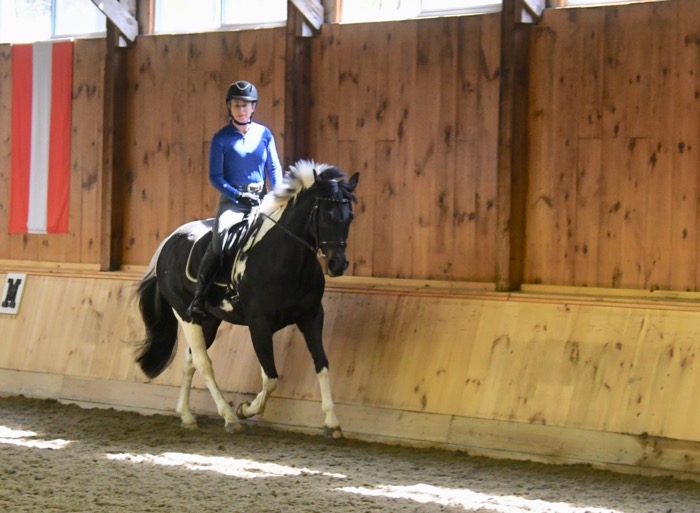 I’ve started taking lessons again. It’s good to have another eye on us and expert advice. Here Tonka has gone behind the vertical – he’s trying out the idea that maybe doing that will make the work easier. I urge him on, and send his nose forward. 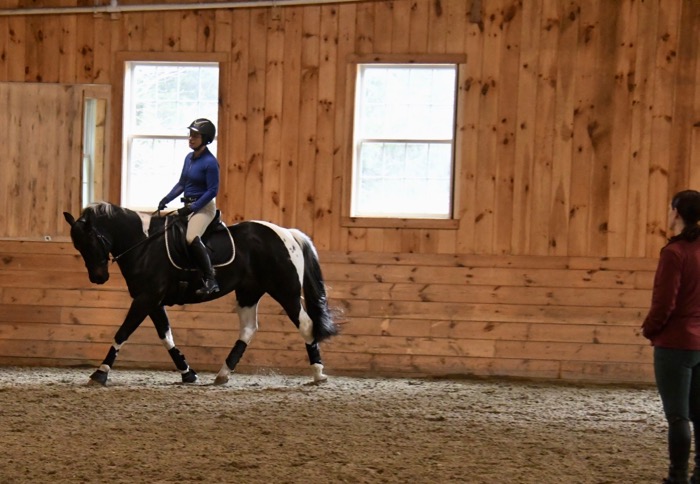 We get this. Which is ideal. What comes next is a good boy! and a cookie. 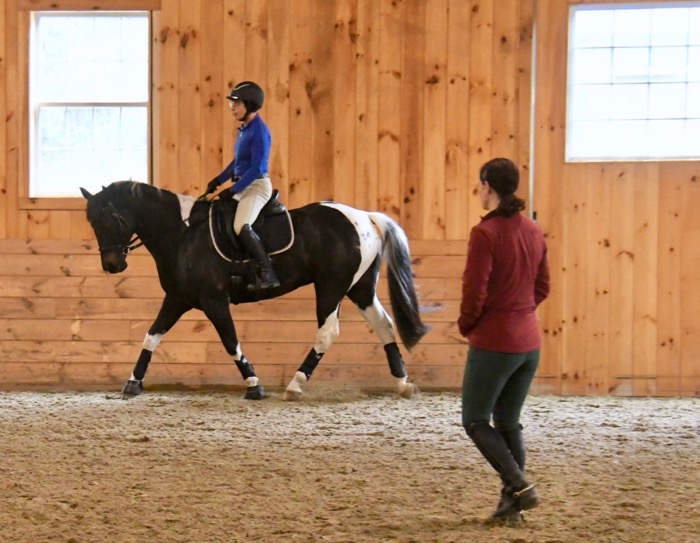 It’s not all boring circles in the ring. Now that the weather is lovely, we’re also getting out and cross-training on hills and uneven ground. This was today’s view. 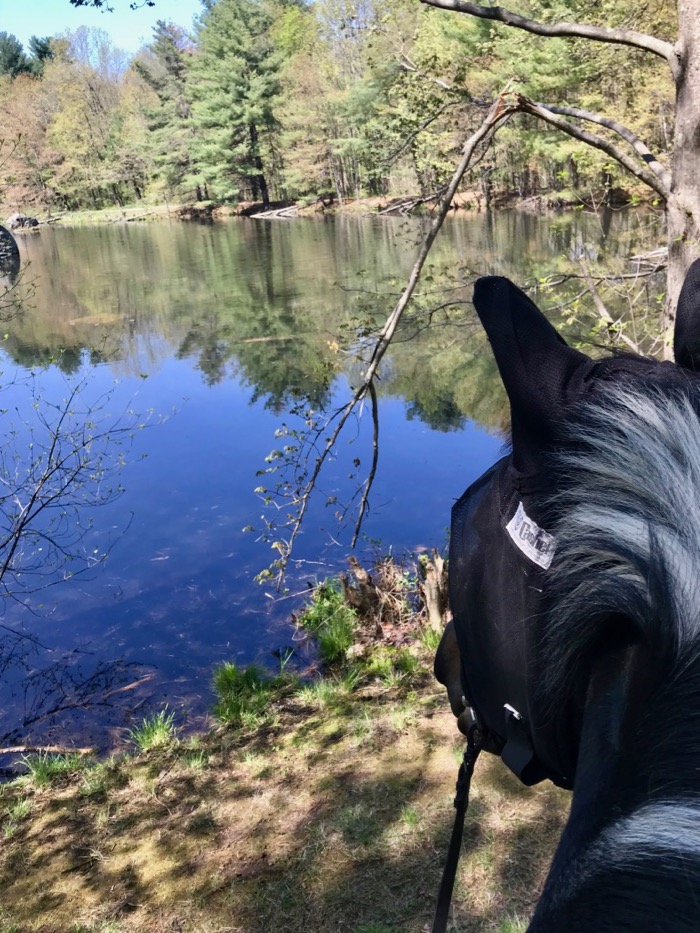 But even on the trail, I keep Tonka using his engine. It’s hard work! But there’s plenty of relaxation to counter all of that effort. Lucky horse, he has a sandy turn-out for a roll and a snooze. 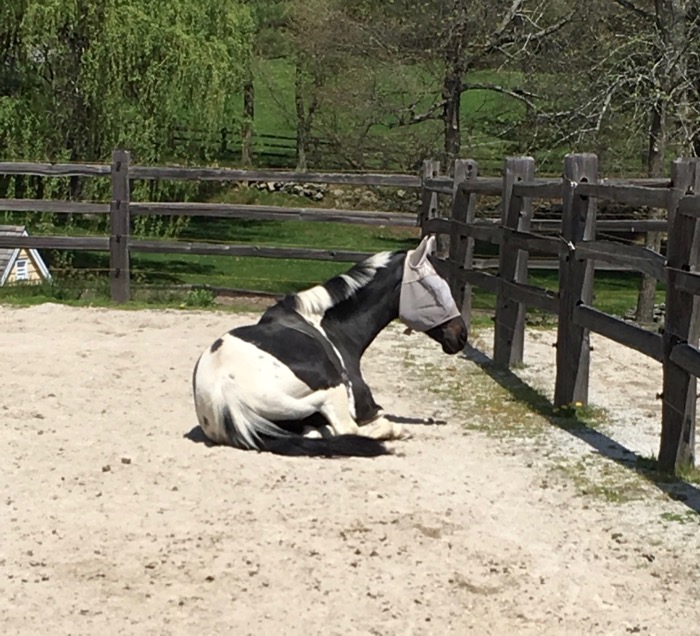 2 thoughts on “Reworking the Engine”