On Sunday, Tonka and I entered our first dressage competition since this past August. We spent most of last year dealing with difficult to diagnose and treat pain – it started in January of 2016 with bursitis in the poll, moved to damage to neck vertebrae, and continued on to sacroiliac joint inflammation. Tonka was ridable for some of last year, but most of that time he was inverted, trying to protect what hurt. This past winter the issues subsided and I slowly brought him back into full work, making sure that he carried himself in an ergonomically correct (and beautiful) way. We slowly built up his stamina and muscles.

What we did paid off. Yesterday we placed first in our Training Level Test 3, Open Division class at a schooling show with a good score of 69.5. Our first halt was perfect. You can’t get that balanced by just moving the feet. The whole body has to be able to square up. 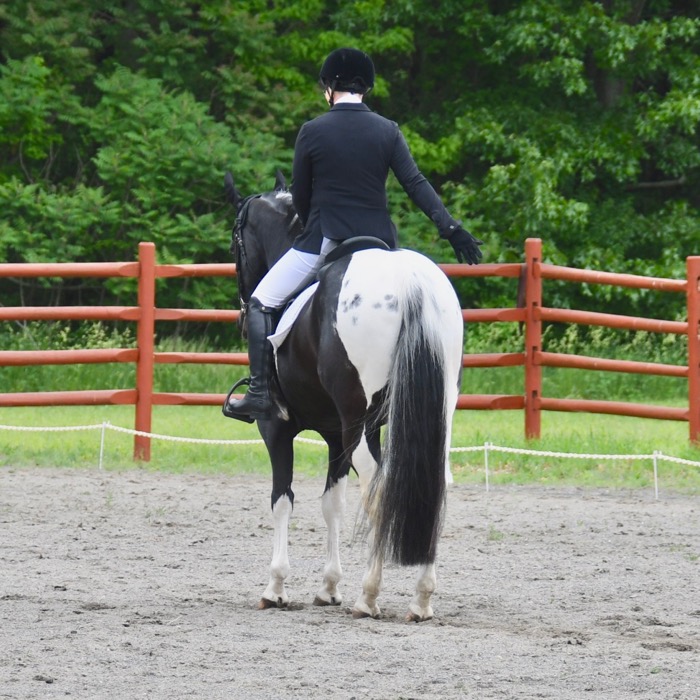 Along with the physical work, I’m always aware of the mental component. Tonka arrived relaxed and happy. You can see how interested, yet unfazed, he is by the commotion and the tacking up. This isn’t just due to his good nature. It’s because I’ve carefully given him many positive experiences away from home. 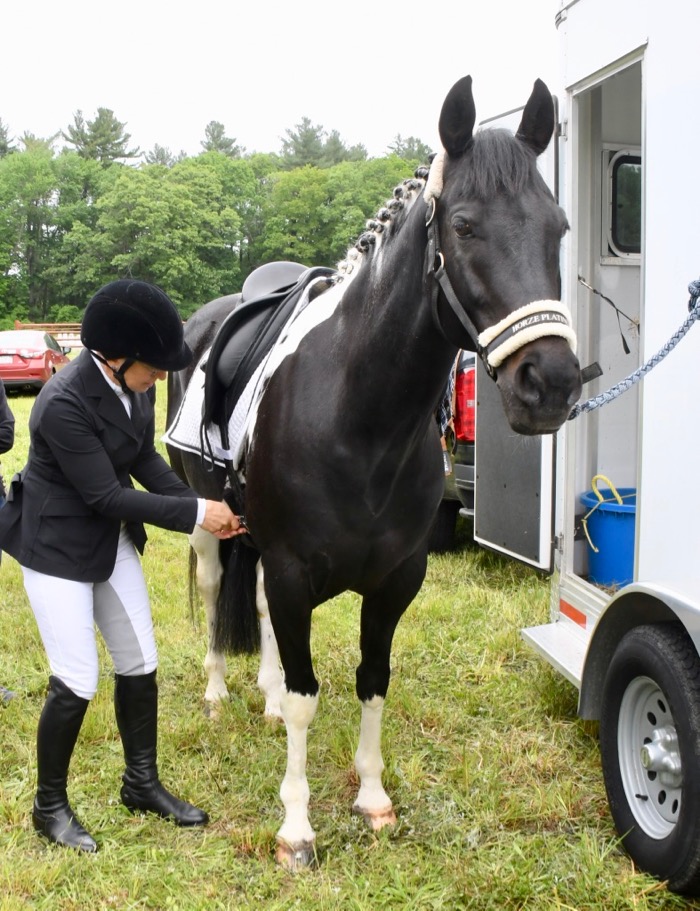 He ended the day with the same expression. 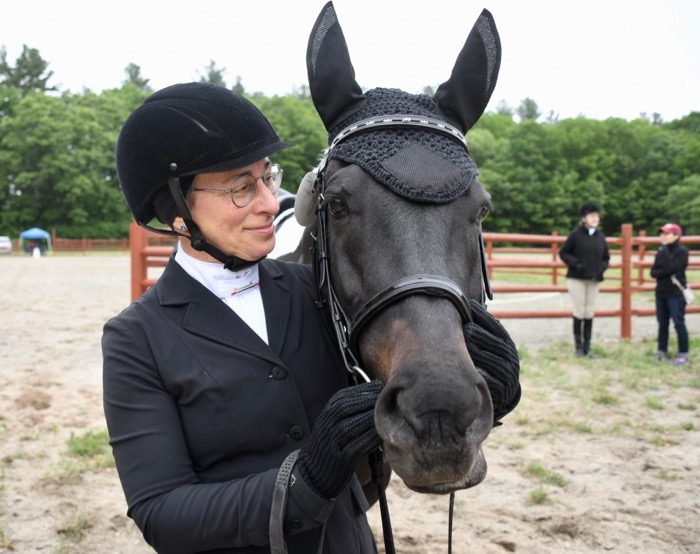 In between, he cheerfully warmed up. I allow that enthusiasm before asking him to get into a more “dressage-y” frame. 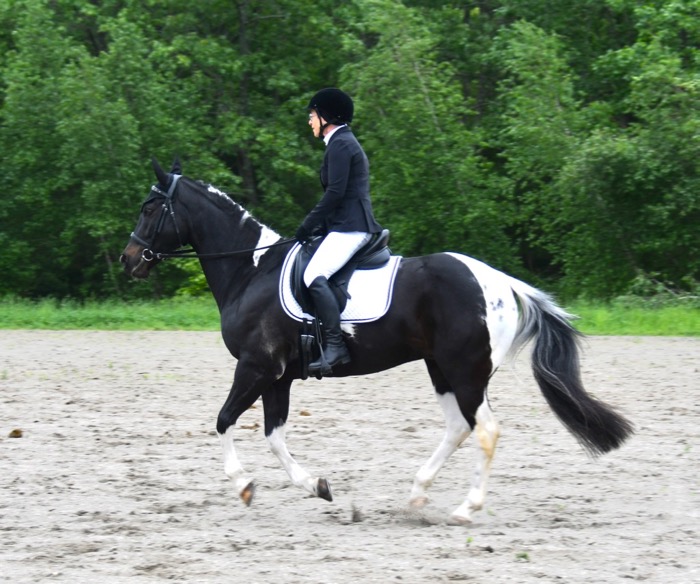 Our test was good, but not as good as our warm-up. Each of the 13 pieces of the dressage test pattern are scored on a scale from 1 to 10. We got our lowest mark, a 6, on the collective marks of impulsion. This was frustrating! Why does Tonka lose his sparkle in the dressage ring?

To find the answer, I looked at the video and photos that Steve took. There were some nice moments. 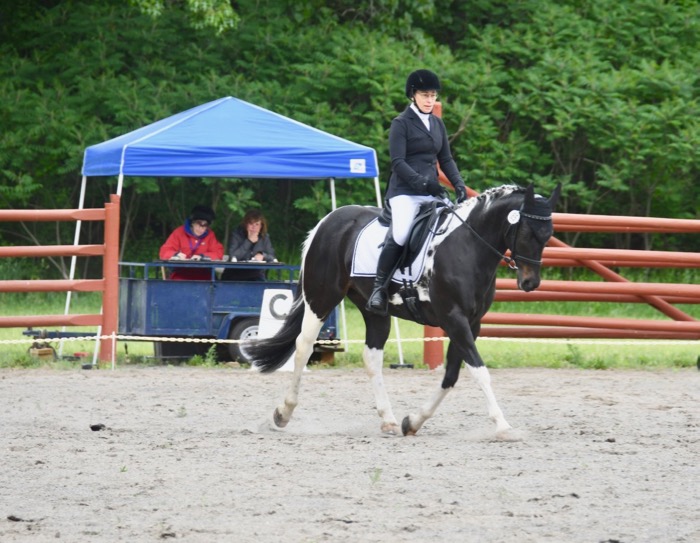 But look at my face. I’m huffing and puffing! 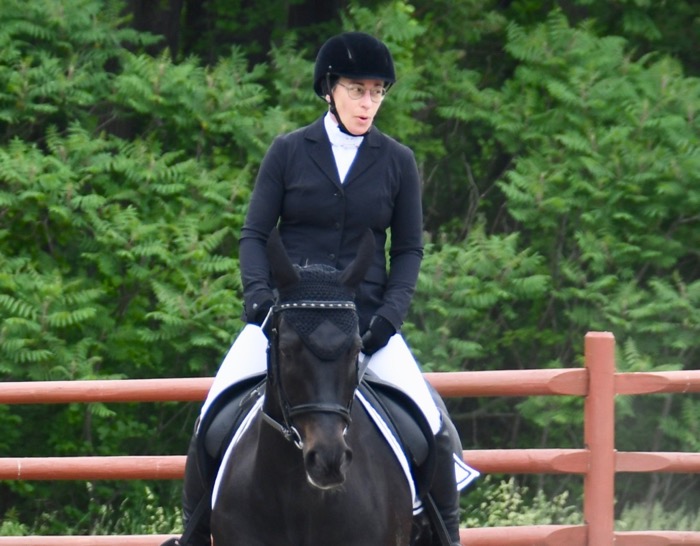 I should have applied Tonka’s exercise regime to me!

Tonka was doing exactly what he thought I wanted. When I compete, I get tense. That affects my breathing. By halfway through the test, I tire and lose the ability to ride with the finessed communication that I do at home. Also, without meaning to, I pinch with my knees and bring my heels into his sides. Instead of moving forward from that, Tonka braces against it and slows. He tries to calm me down by going as relaxed as he can. 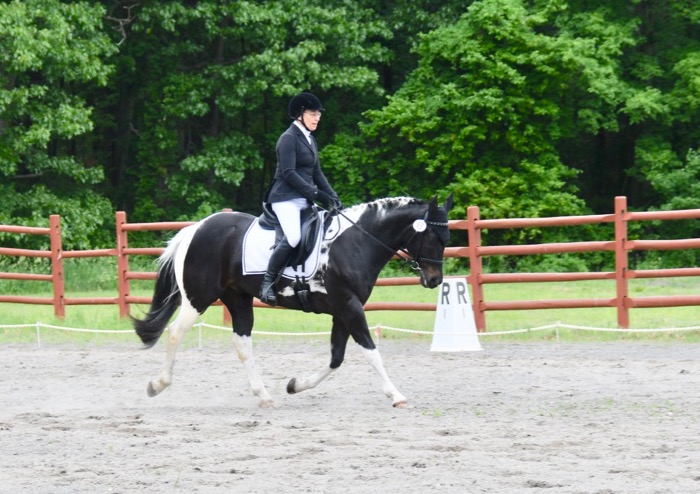 Relaxed isn’t all bad. We had this comment from the judge. “Lovely rapport with this team.” That’s my ultimate goal, always, so I was pleased that the judge recognized our relationship.

Still, I should be able to have that rapport and ride effectively! I’ve already been doing a ten minute daily stretching routine. Obviously, that’s not enough. It’s time to finally get serious about my tight glutes and hamstrings. I’m also going to add an aerobics workout to my day. I’m sure Tonka will appreciate a fitter rider on his back. 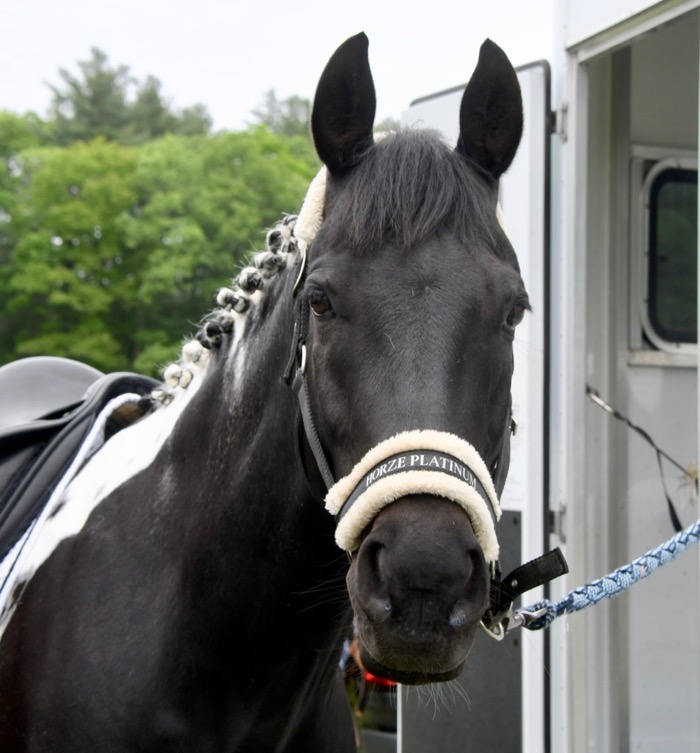 Do you stay fit for your horse. If so, what do you do?

Also, if anyone has a last-minute at the show, get the yellow travel stains off of the white hocks trick, would you let me know? Thanks!

7 thoughts on “Getting Riding Fit”