Some injuries are easy to diagnose and treat. When a horse stepped on me, it was obvious that he broke a bone in my foot, and the treatment plan was straightforward. I was told, in plain English, to ice, elevate, protect it in a boot, and rest. I might not have liked that course of (in)action, but I did it, knowing that I had to in order to heal.

But with our horses, there’s often no clear injury, and the patient isn’t as amenable to following doctor’s orders. This last year with Tonka perfectly illustrates this sort of situation.

First, Tonka developed bursitis in his poll from eating out of this hay net in a way that it was not designed for. (This farm has since adjusted how the nets are installed.) 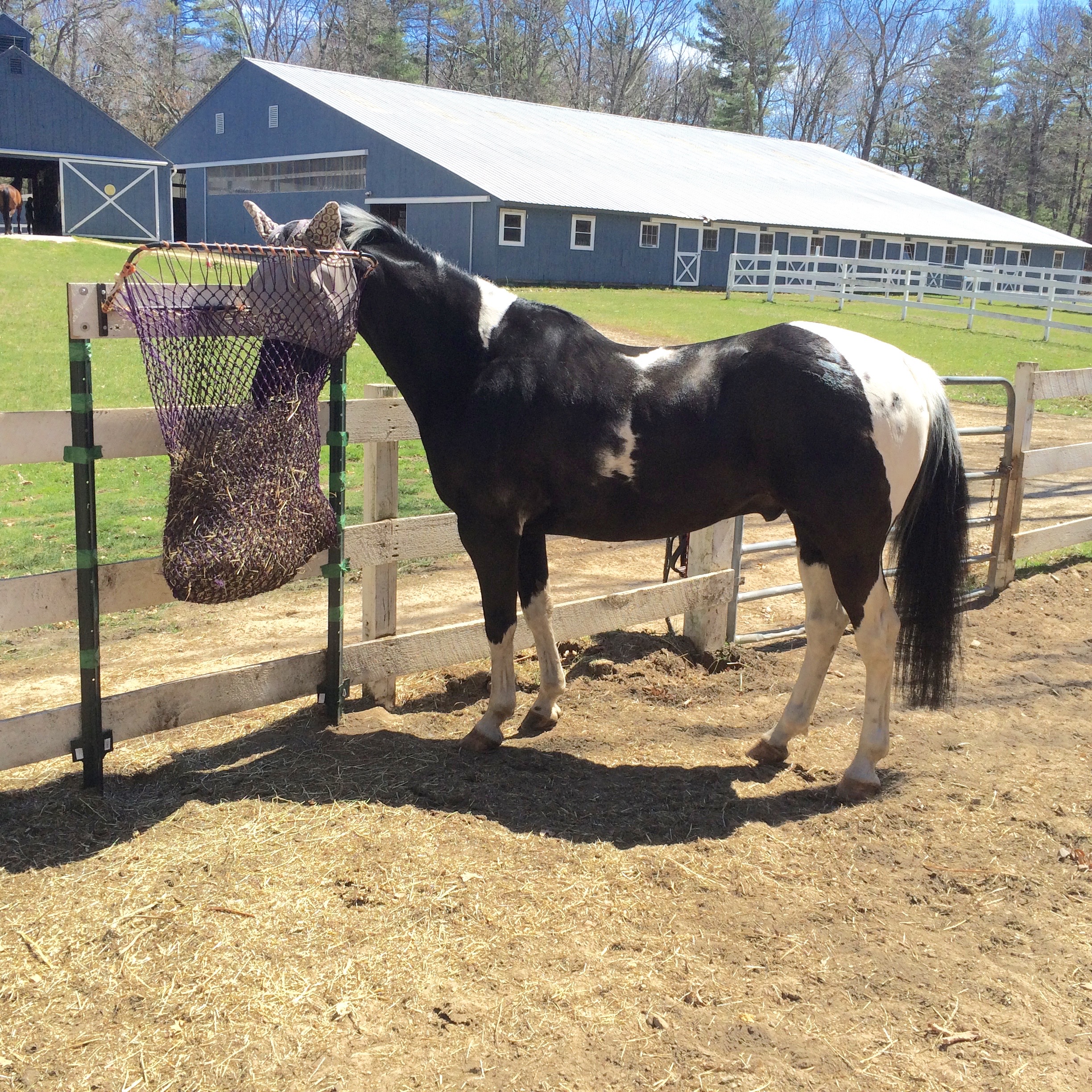 Then, Tonka showed signs of extreme discomfort. It was hard to tell where the pain originated. His back? His hocks? Those places hurt. Hocks were injected. Medications were given to release tight back muscles. But, it turned out that the first domino in his cascading health issues was damage to his neck vertebrae. How did this occur? The best guess is that he took a spill on ice. 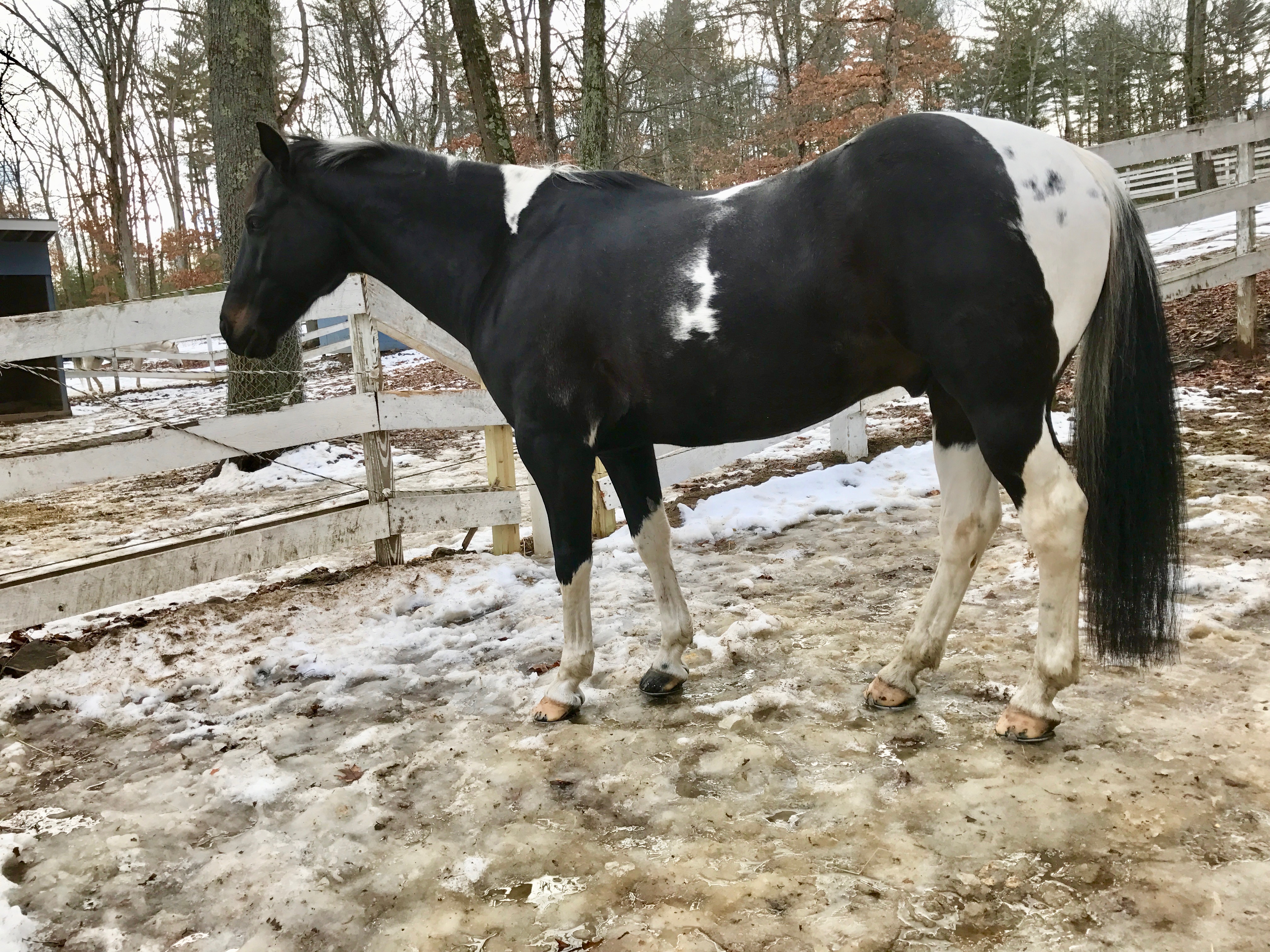 His neck was injected and things were fine. For awhile. But, as I’ve blogged about, Tonka still doesn’t feel right. I had assumed that the neck issues were behind us, but I was wrong. A veterinarian/chiropractor looked at him and said that Tonka was moving in ways to compensate for that damaged neck. So, last week I had my regular veterinarian out. We discussed how it can take more than a year, if ever, for vertebrae and their associated tissues to fully recover from injury. We decided to do shock wave therapy, which could reach that area and jump start healing.

The machine is noisy, and it’s called shock wave for a reason. You feel it. Some horses require tranquilizers. Tonka did not. 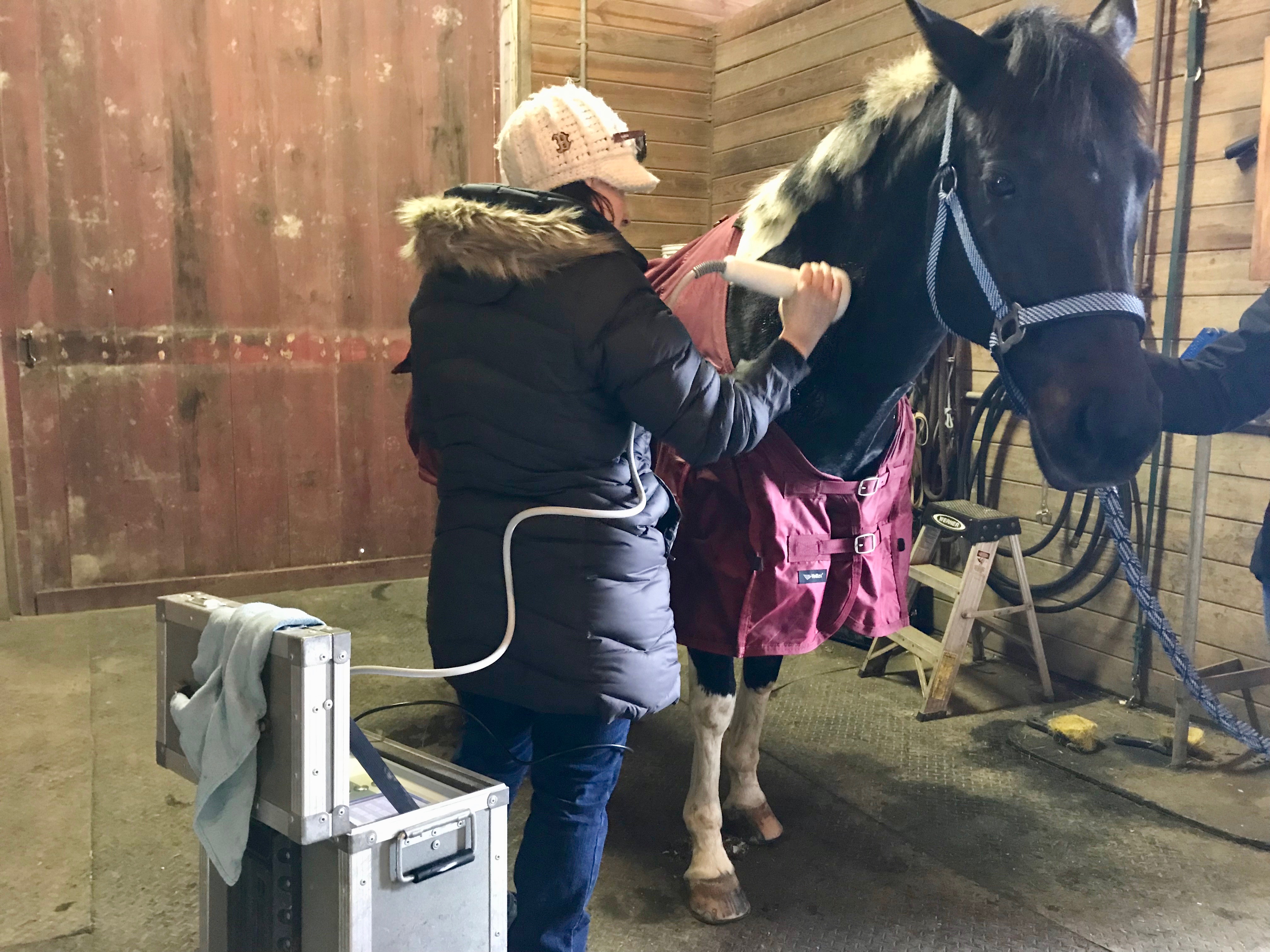 In fact, he seemed to enjoy the experience (and the attention.) 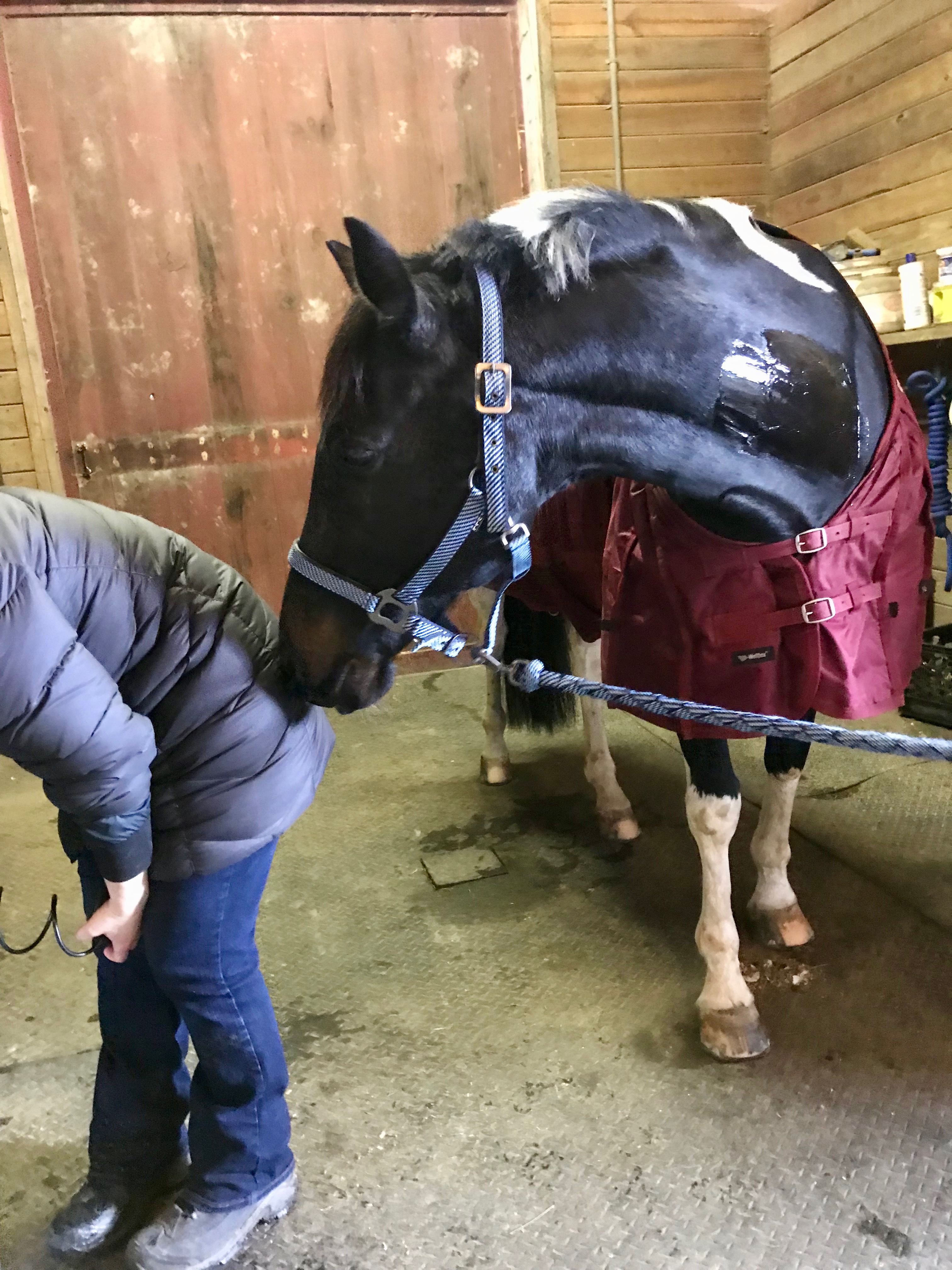 The shock wave has not been a miracle cure, but it should help.

What does make a difference for Tonka’s comfort is to ride him on the bit, in a dressage frame.  Going like this immediately takes pressure off of the damaged vertebrae. It builds his back muscles and strengthens his hindquarters so that Tonka can carry himself without using his neck to balance. The stiller he can keep his head and neck as he moves, the more comfortable he is. 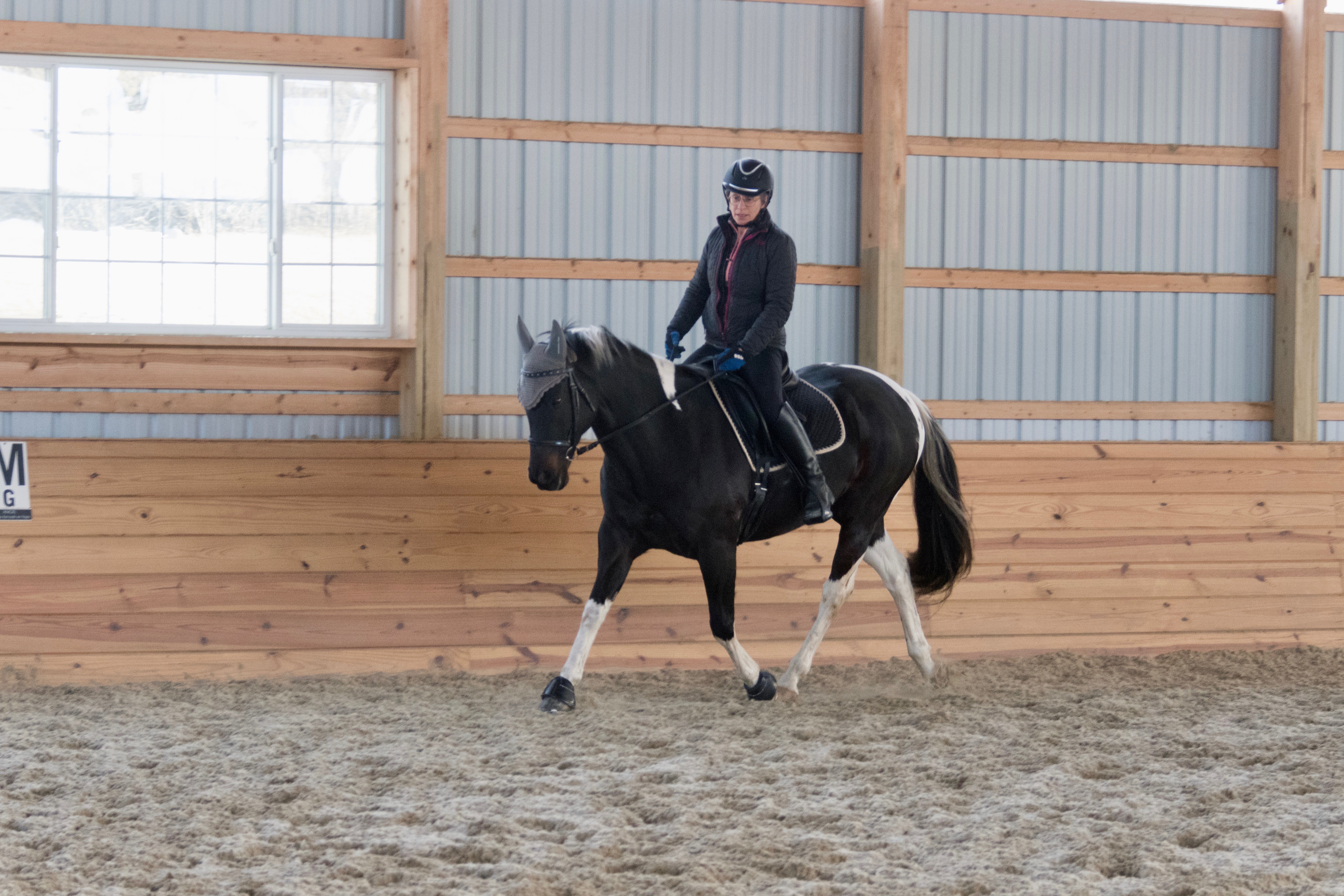 But this isn’t an intuitive way of going for Tonka. His solution to the injured vertebrae has been to use the underside of his neck to carry his head, and to hollow his back to alleviate the vertebral pain.  Here he is, going in a way that he thinks is right. 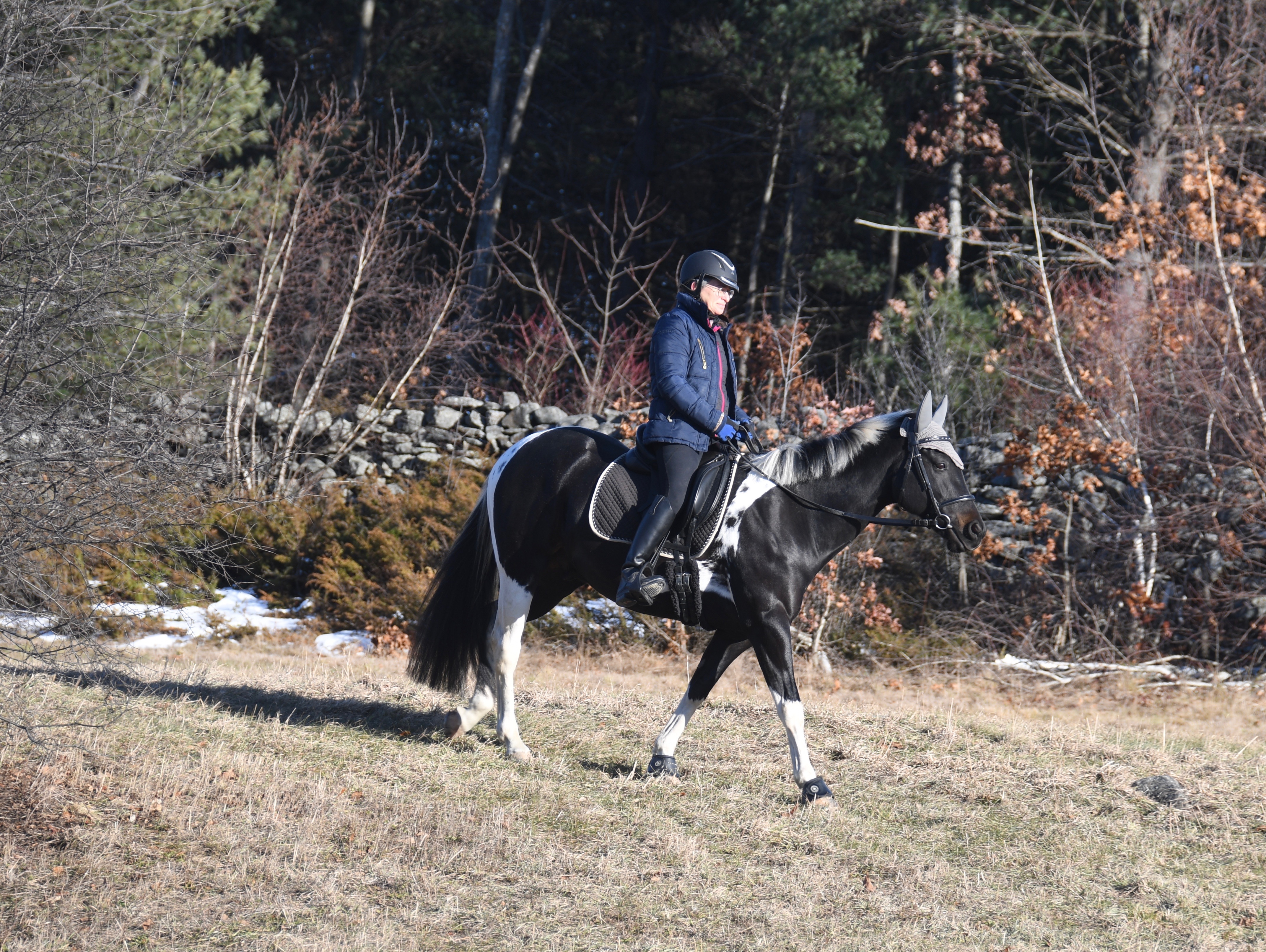 Unfortunately, the more he does that, the the more likely that he’ll develop pain elsewhere (his back is already sore from moving this way.) So, I ask him to power off his hind end, to use his top line and to slightly arch his neck. 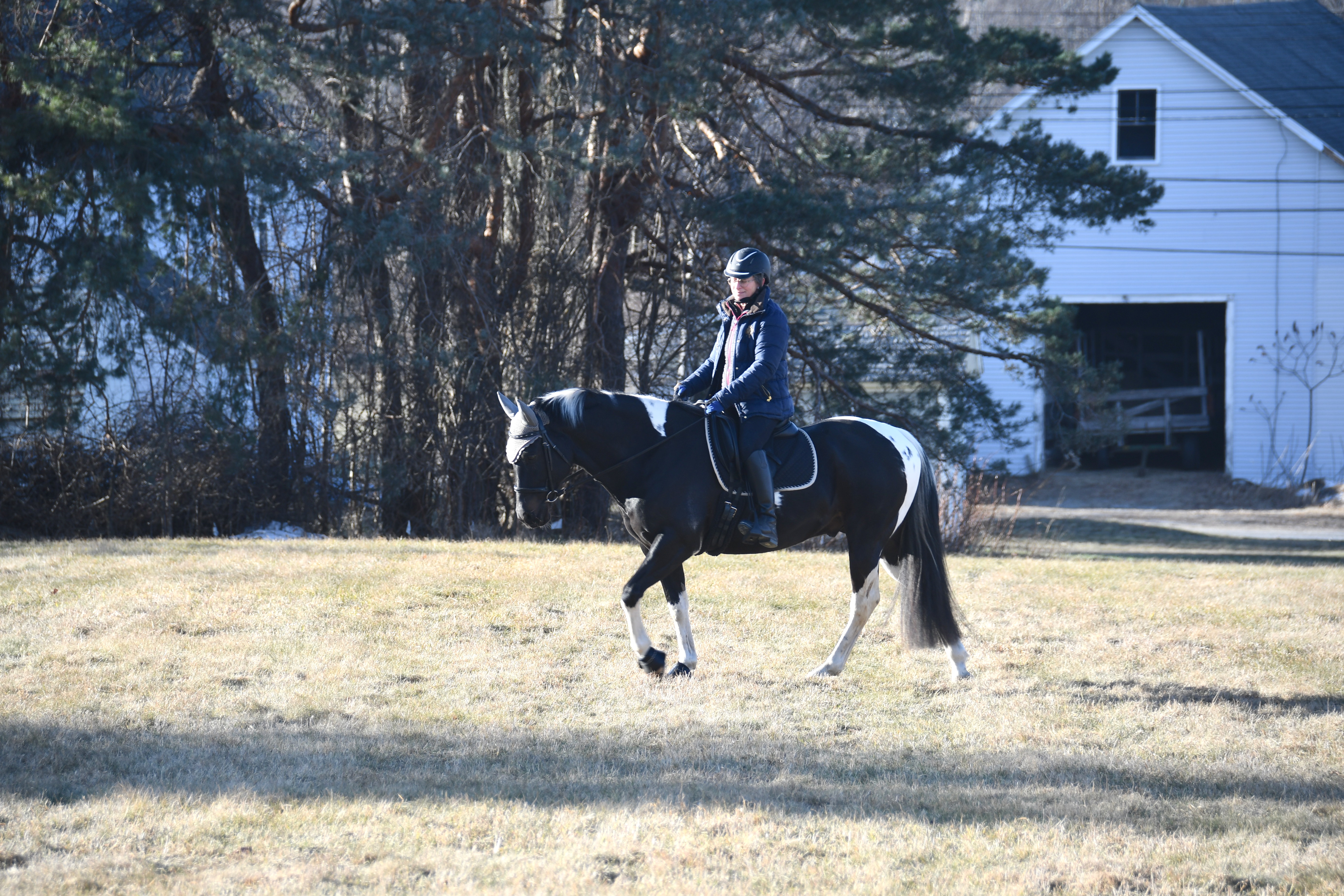 This is the equivalent of a human improving their posture. It’s not easy. The natural inclination is to round our shoulders and collapse through the belly. As we all know, simply wanting better posture doesn’t make it happen. Nagging doesn’t change things, either. Being yelled at to stand up straight! might cause a change for a few seconds, but the lasting effect is to avoid the person who’s yelling at you. What does work is to build your core and to do stretches so that correct posture feels good and becomes your default. People are self-motivated to do this. Some of us ask for help. We go to gyms. We hire personal trainers.

Tonka does not know that good posture will make him feel better. He says that he did not hire me, and to leave him be to slouch around the ring. I tell him that he’s got a gym membership, whether he likes it or not. But, like with humans, in the long run, yelling doesn’t work.

Riders often say that they “encourage” their horses on. Encourage is a euphemism for the use of the whip, or heels pressed into the horses’ sides. I don’t like to use that word, because it makes that pressure seem so nice and positive. It’s not. But sometimes I use those tools to get Tonka going. I do so fully owning up to what they are, and I put them aside as soon as I can.

Once Tonka is moving with a still neck and powering from behind, I know it feels good to him, because he settles into it, tail swinging loosely to the rhythm as he motors along without urging. I heap praise on him, sometimes give him sugar cubes for his effort, and give him rest breaks that he understands happen because of his hard work. Still, what I’m getting him to do is physically demanding and I don’t want him to think of me as just his personal trainer.

Thank goodness the snow and ice melted. I am also the maitre ‘d and dining companion at his favorite restaurant. 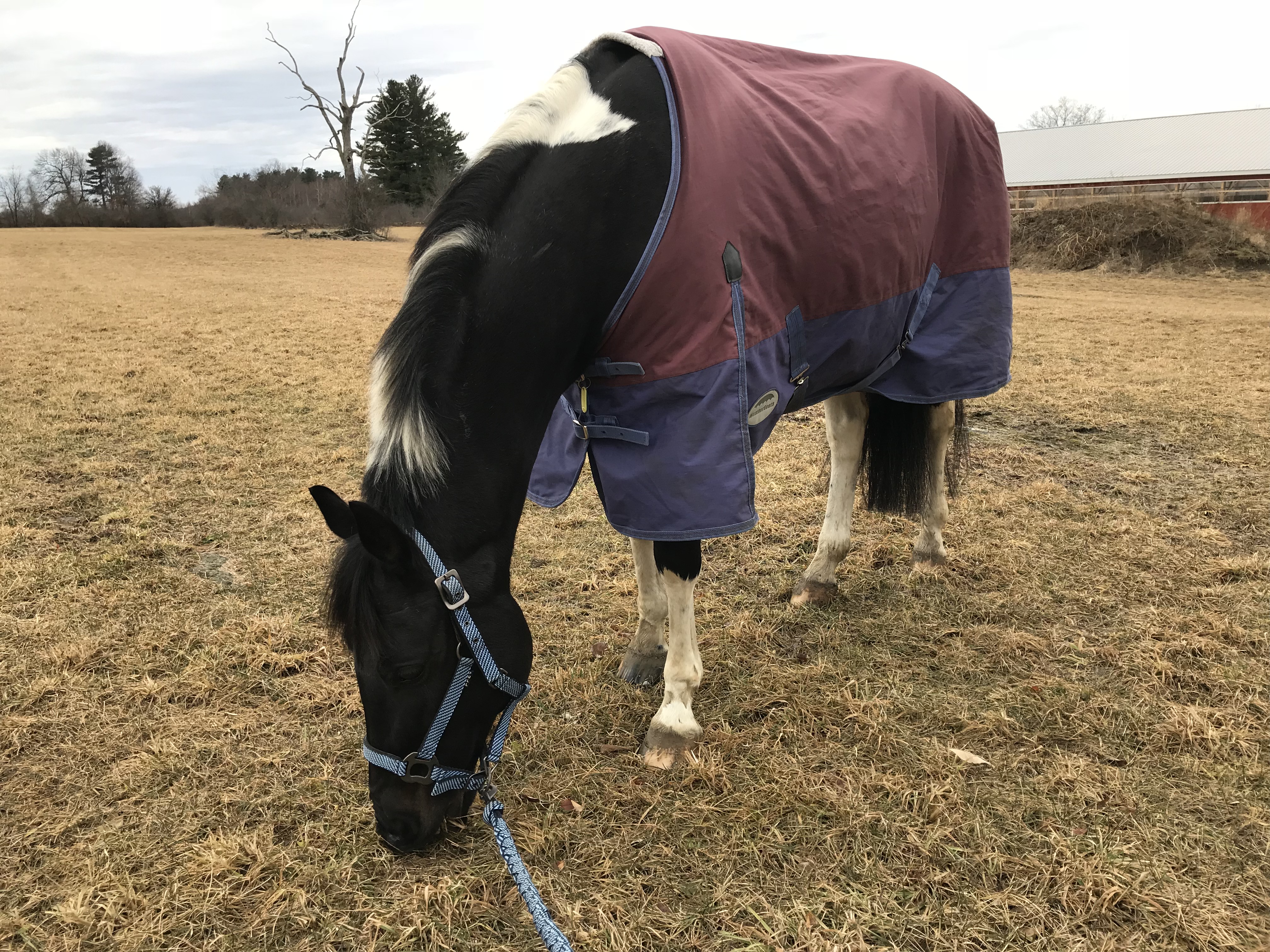 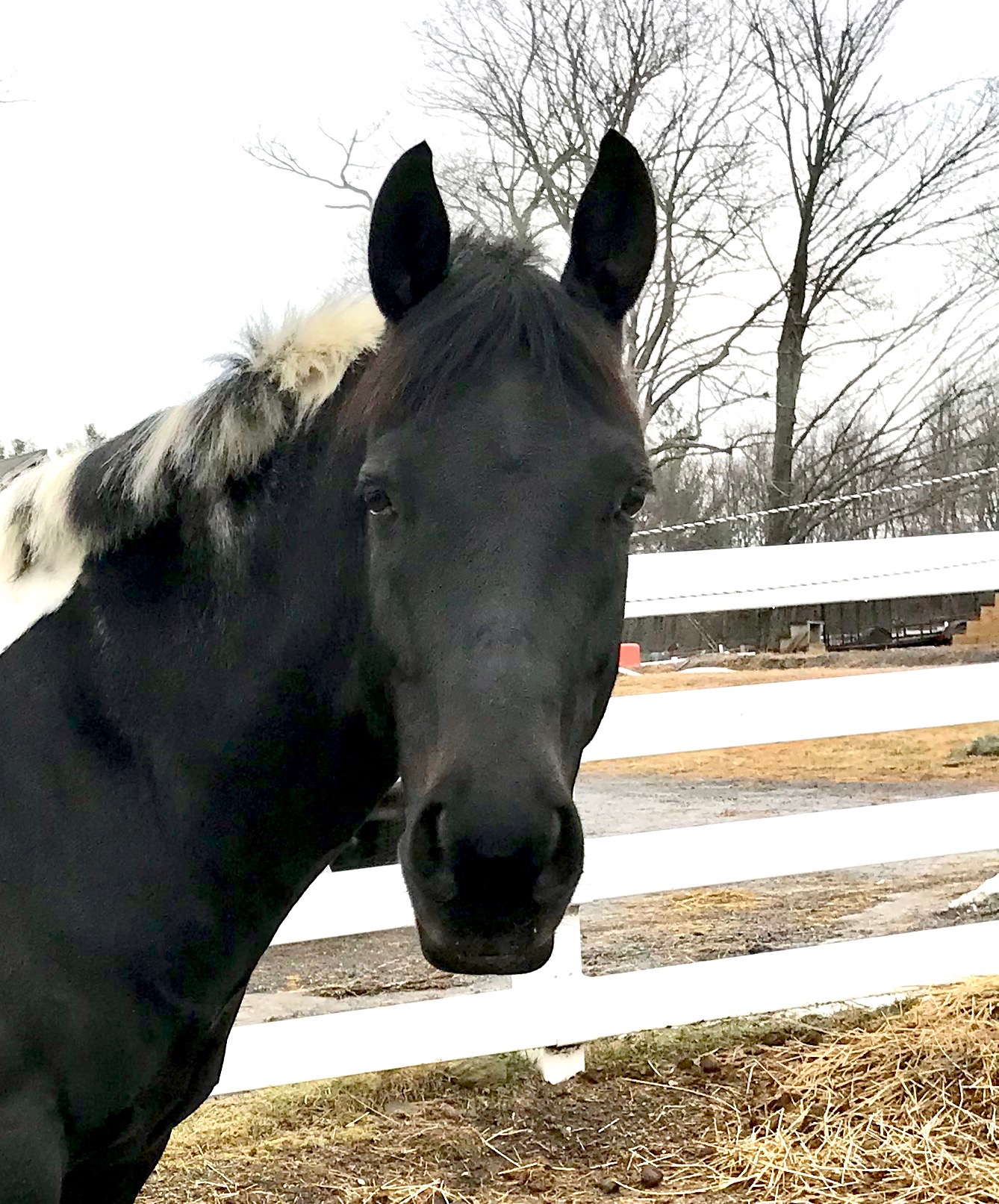