Horses sleep lying down. Tonk’s stall is clean when he goes in at night, but horses poop, and Tonka always seems to find a pile of manure for a pillow for his (white!) quarters. During the day, he has a favorite sandy spot in the paddock to roll in. 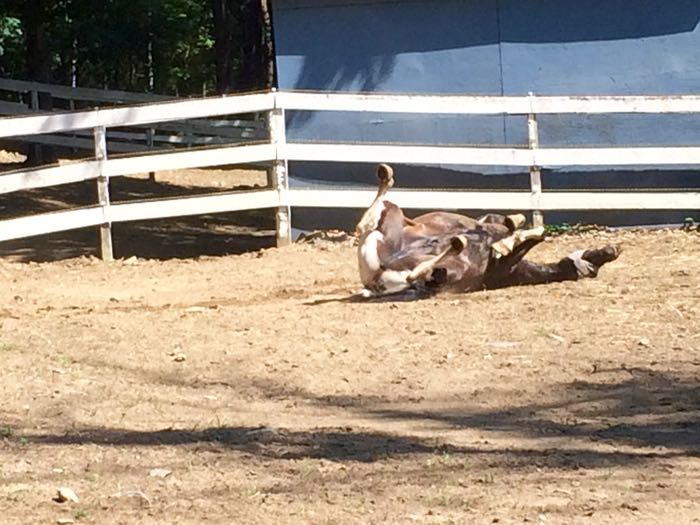 Some horses are one-side rollers, but Tonka rolls on both. 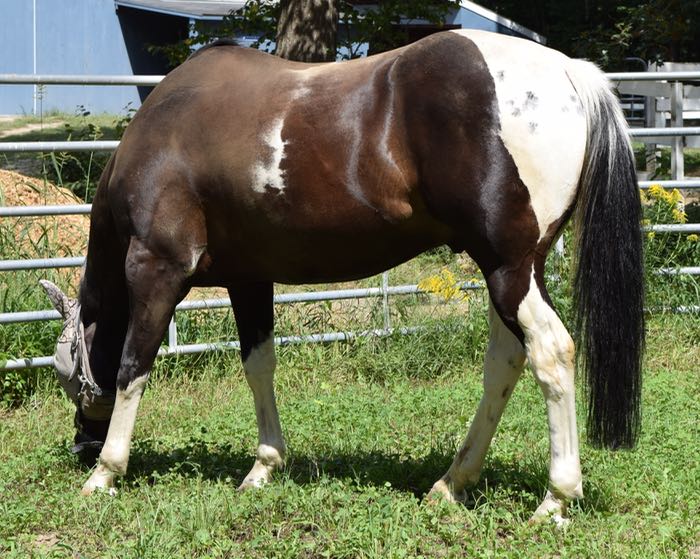 Like all of us, horses have dead skin and dandruff, and being fur-bearing animals, they shed. These are all reasons enough to give your horse a grooming everyday. But, getting your horse clean is not the most important reason to get out the brushes. I spend hours a week grooming my horse because this is a way to bond with him.

Horses are herd animals, who (when managed properly with space, resources, forage, etc.) get along in a companionable manner, mostly walking around and eating, and at times dozing in the sun. Within that group there are tight friendships – usually bonded pairs. Those horses stand tail to head, swishing flies for each other; sometimes they scratch each other’s withers with their teeth. Touch and mutual grooming are essential to horse friendship.

In a boarding situation, you try to put friends together, but it’s not always possible. Tonka spends the day in a paddock with Maggie. They get along okay – there’s no drama, but they’re not best friends. You can’t force friendship. My horse doesn’t have another horse to scratch his withers, but he has me. Lucky for him, I love grooming. I learned my technique at a riding school in England, where there were daily inspections. No teatime if there was a rough spot on your horse! A thorough grooming takes time – which I think is a wonderful excuse to get in tune with a horse.

Most grooming sessions start with a [amazon text=curry comb&asin=B002HPRRKW]. This one is flexible rubber. 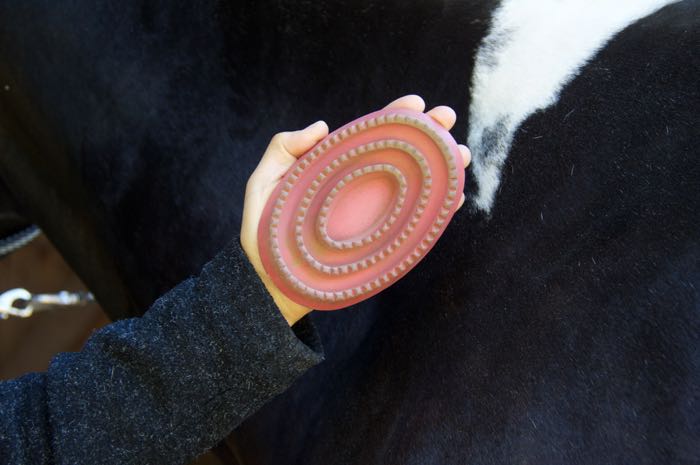 When I first got Tonka, he pinned his ears and fidgeted when I groomed him. As always, my mantra is to pay attention. The horse will tell you what he likes and what he doesn’t. Your horse will know if you are listening to him. Horses communicate to each other with superbly subtle body language – a flick of an ear, a shift of weight – all has meaning. How frustrating it must be to horses to have to interact with us dull humans who don’t listen! Responding to your horse’s body language while grooming him is the first and most basic step to gaining trust and it will carry over to when you are on his back. Something as simple as changing how you brush him because of what he tells you reaps rewards far beyond having a horse politely stand still. So, I respected what Tonka had to say and I put away the curry. Instead I got a [amazon text=sisal grooming mitt&asin=B002HJB5PG]. (The one I have is an inexpensive model, but you could splurge and get [amazon text=this one&asin=B00WOMBROU].)

As you can see, it does a great job of loosening dirt and hair. 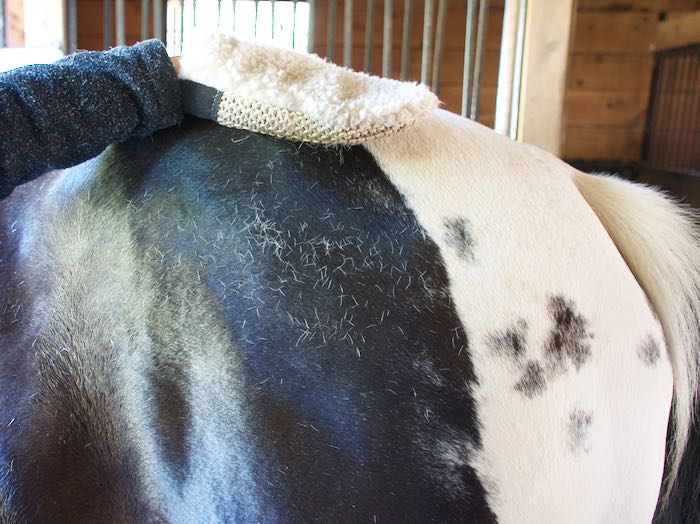 Tonka particularly likes having me use it on the insides of his legs where he can’t reach. How do I know? He politely shifts his bum and leans in. 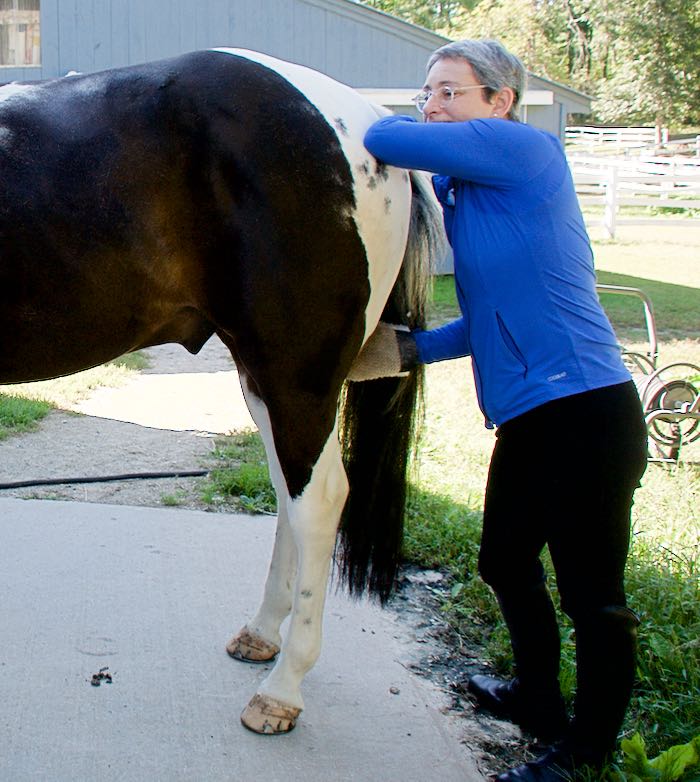 Here is Tonka, tipping his head so that I can scritch his ears and poll with the mitt. 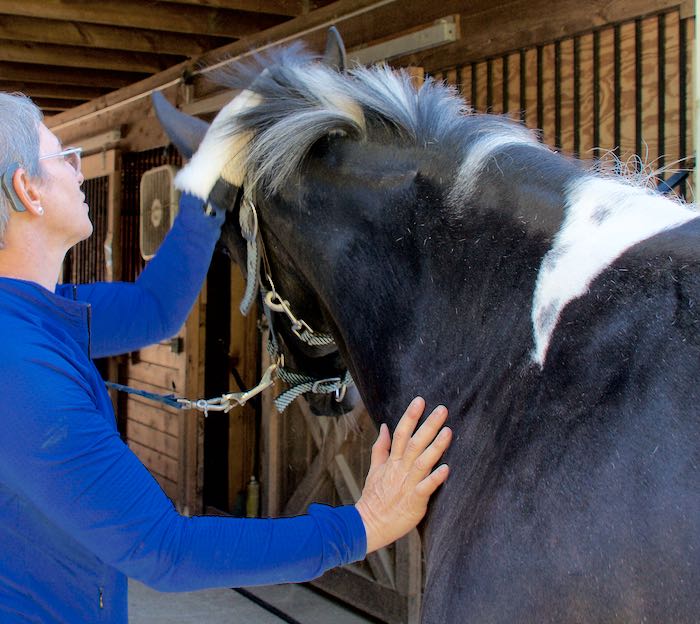 This is a happy horse. 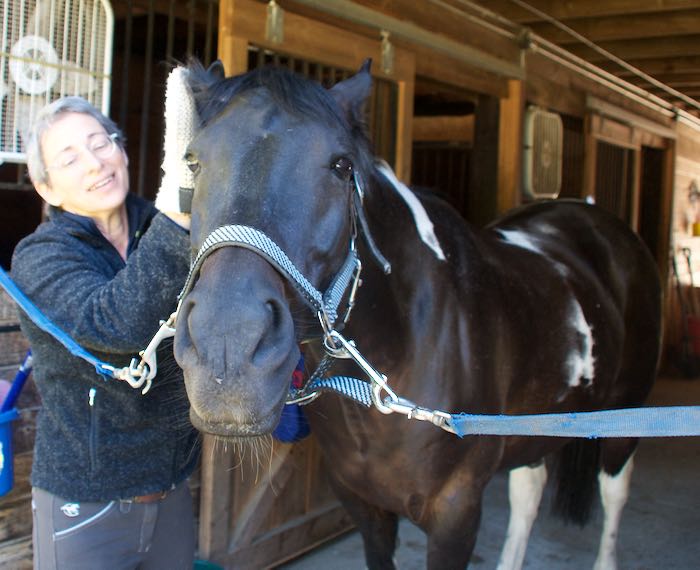 Next, I use a [amazon text=dandy brush&asin=B00GGIYKZG] to flick the loosened hair and dirt off of him. 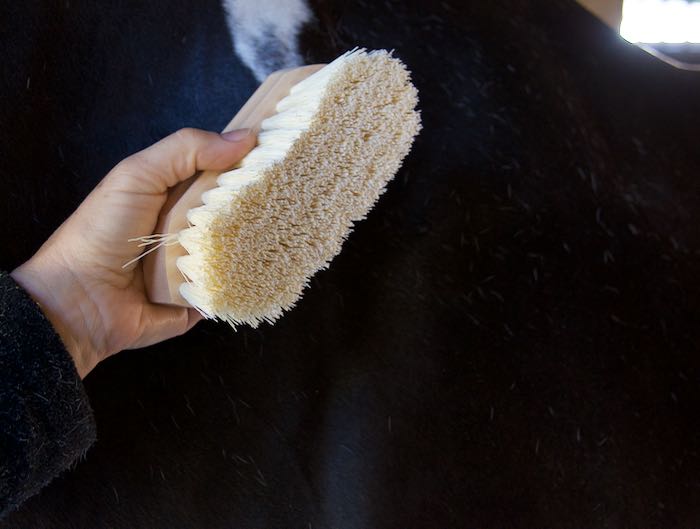 As I groom, my free hand is as important as the one holding the brush. It feels for rough spots, lumps and anything else that I might not see. 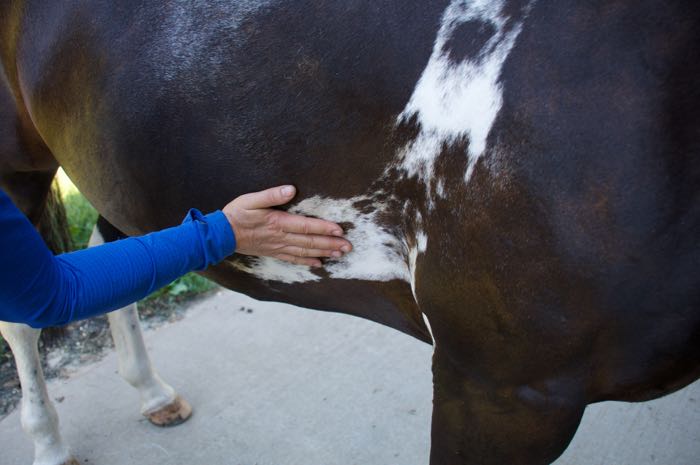 The [amazon text=body brush&asin=B004BP58MK] comes next. This gets the fine dirt off, and brings up oils and creates shine. I love seeing a gleaming coat. 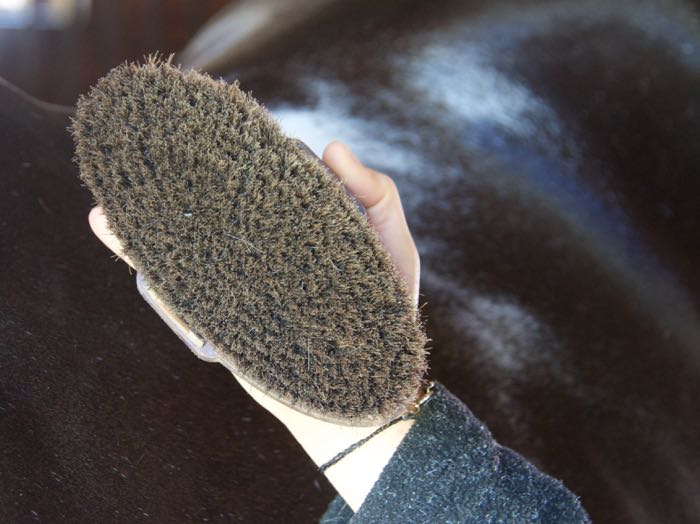 I do have a use for that curry – I use it to keep the brushes clean. 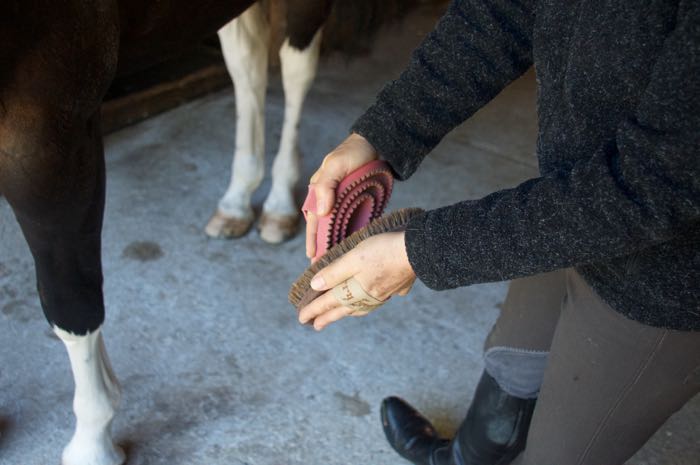 At this point, some people stop brushing. I don’t. I pull out a finish brush. When I first got Tonka, before I even touched a brush to his face, he let me know that he didn’t like it. He’d swing his head away from me when I held a brush at the height of his head. So, I got a smaller, super-soft [amazon text=brush&asin=B00DVKJC8M]. I used clicker training to teach him to touch his head to the brush (I didn’t reach to him, he came to me.) When I finally brushed his face I could see him realize, this feels GOOD. Now I use this brush on his entire body. (I don’t use the clicker for grooming anymore – it was for that specific situation that needed to be changed. I like grooming to be peaceful and undemanding. Tonka can relax and not worry about doing a behavior for a reward.) 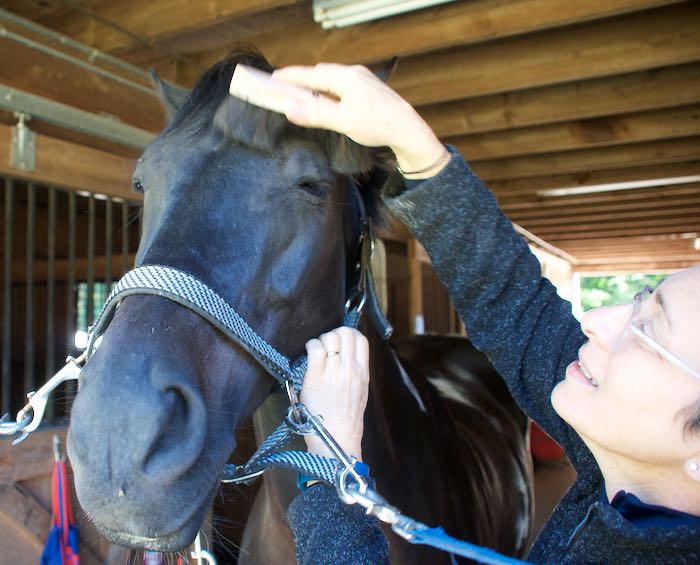 If I have the time, I go over him with a sheepskin [amazon text=mitt&asin=B00KM9WXDG]. That gets the last bit of dust and dander off, and he likes it. (By the way, I’m not holding him down by the halter, I’m moving it out of the way to get his whole face.) 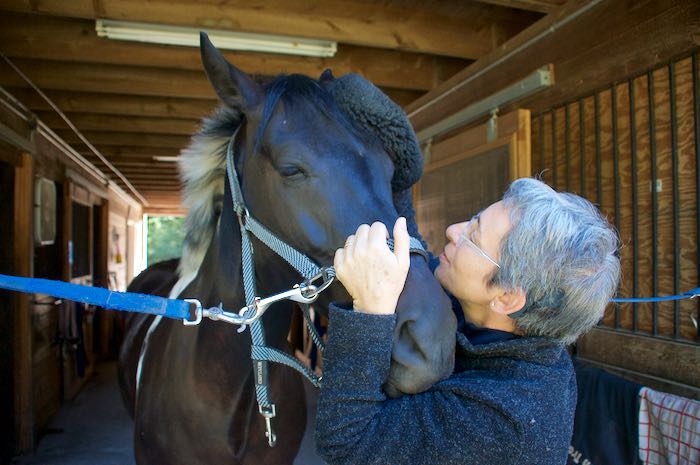 We’re still not done. There are shavings in his tail to comb out and knots to untangle. I start from the bottom and use a [amazon text=big comb&asin=B001C46LMO] so as to pull out as few hairs as possible. 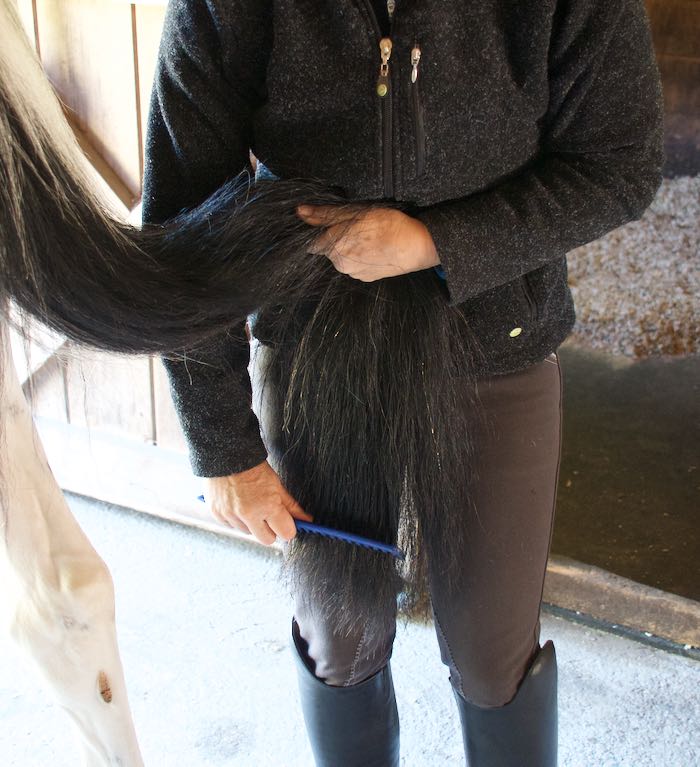 Then, I pick out his hooves. 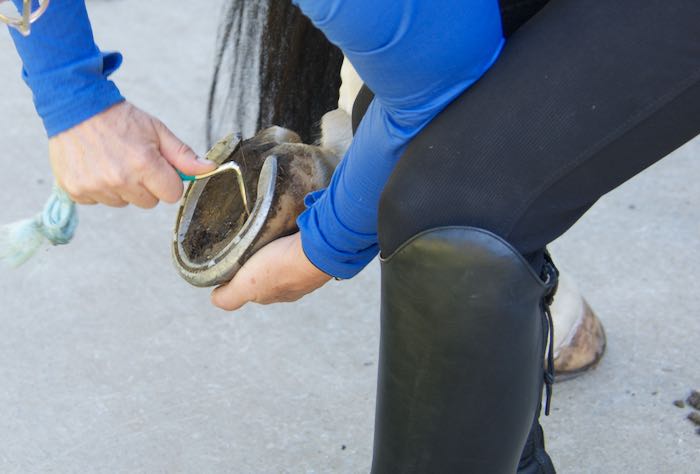 Lastly, I sweep up. 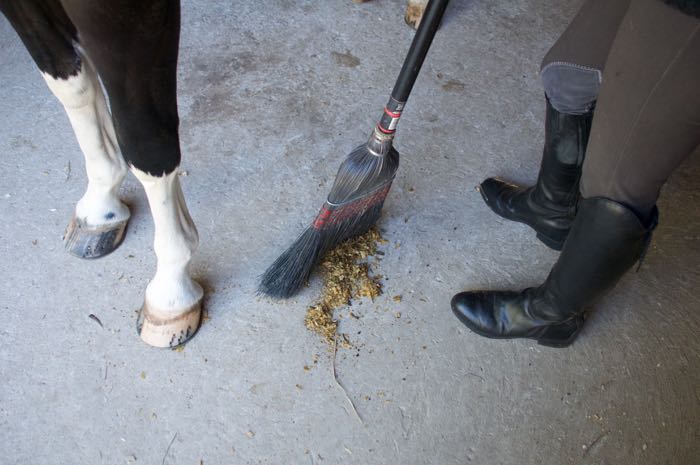 All of that work is worth it. 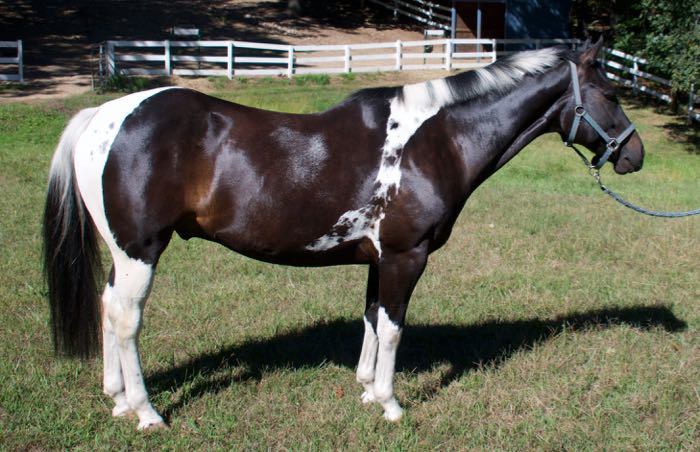 And it makes us both happy.

I teach others how to groom their horses so that it is a mutually beneficial time for both horse and rider. Here’s a quote from one of my clients:

Ever since I switched to your style of grooming Salti has stopped stepping away. In fact he leans into the cactus cloth on his neck.

Salti was a horse that I had dubbed “Mr. Grumpypants” because of his ear pinning and general annoyed expression. It turns out that Salti is a both a sensitive soul and a horse with very sensitive skin. With a few adjustments in care, he’s become affectionate and more outgoing.

I’m willing to travel. If you want to learn how to have a dialog with your horse while grooming, email me. I’ll listen to both of you.