I’m at an art festival with my husband. We’re holding hands. I see something that I want to look at. I walk towards it, he feels where I’m going through our hands. He follows. He gets distracted by something and he stops, he pulls lightly on my hand so I stop and look, too. I want him to move on, so I give his hand a squeeze and I tug. We continue on. I don’t notice a rope near the ground. He does, and yanks on my hand to keep me from tripping. It’s sudden and annoying, but then I realize why and appreciate it. This seemingly simple hand holding is a way for us Steve and I to feel emotionally connected, and it’s also tactile communication. The halter on your horse can be a similar conduit for information and affection, but for it to be seamless and welcomed by the horse, you need to do some training.

Fawn had come to believe that when she felt the halter tug at her head, that it would not necessarily lead to good things. She braced against even a little pressure from the rope. Although you could lead or restrain her, Fawn’s resistance to the halter made handling her tenser than it needed to be. Fawn’s owner, Susannah, wanted to change Fawn’s perception of the halter so that she pressure on it became welcome information.

We started this training by having Susannah lead Fawn and then ask for a halt by pulling steadily and lightly on the lead line. Fawn already knew to brake when she felt that pressure. But now when she stopped, I gave Fawn a hay pellet as a reward. Do you see Fawn’s wide apart ears? She’s thinking. She’s processing what Susannah is telling her with the halter and she’s thinking about why she’s getting food. 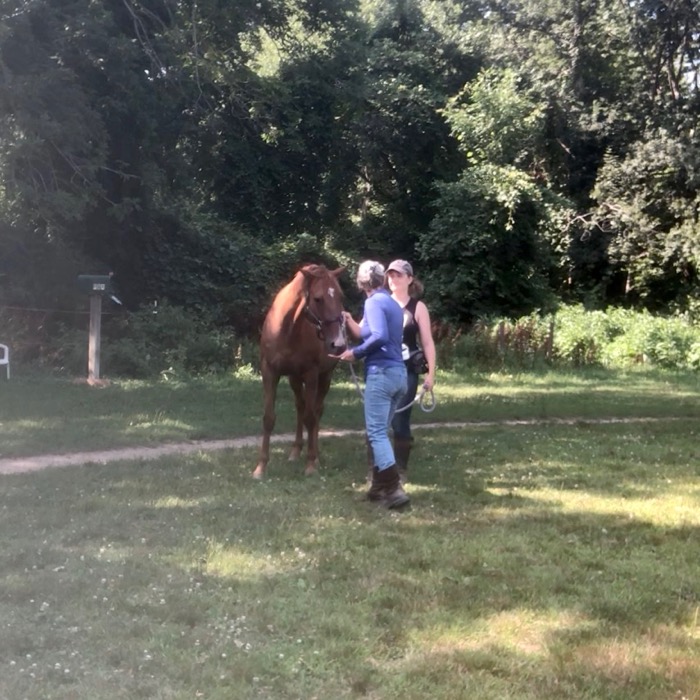 For the first few repetitions of this exercise, I timed the reward as Fawn felt the cue to stop. Then I quickly increased the criteria so that Fawn got the reinforcement after she was standing relaxed and still.

It also takes training of the person. Susannah had the habit of keeping a steady pressure on the rope, even after Fawn did what was asked. 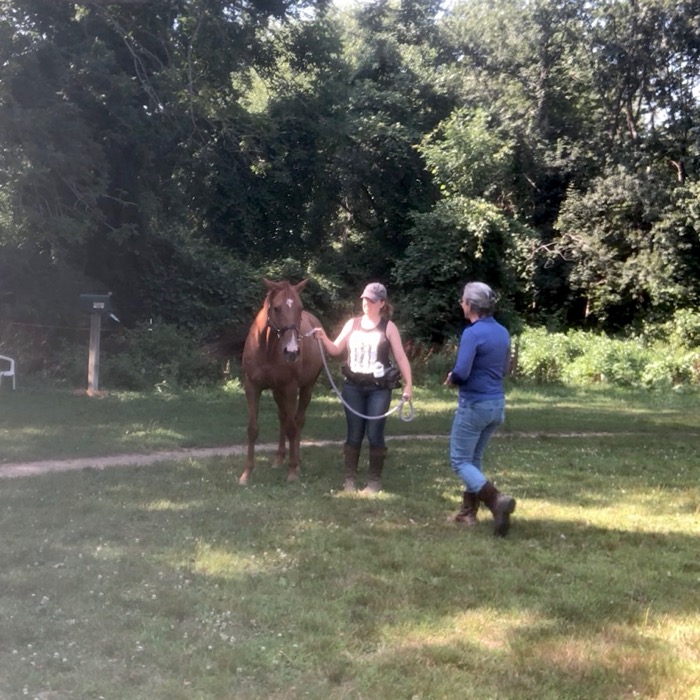 This caused a lack of clarity for Fawn. Did that continued pressure mean that she had to do something else? I showed Susannah how to release the pressure once Fawn had halted. In doing this, Fawn actually stood more immobile than if Susannah kept the tension on the lead line. 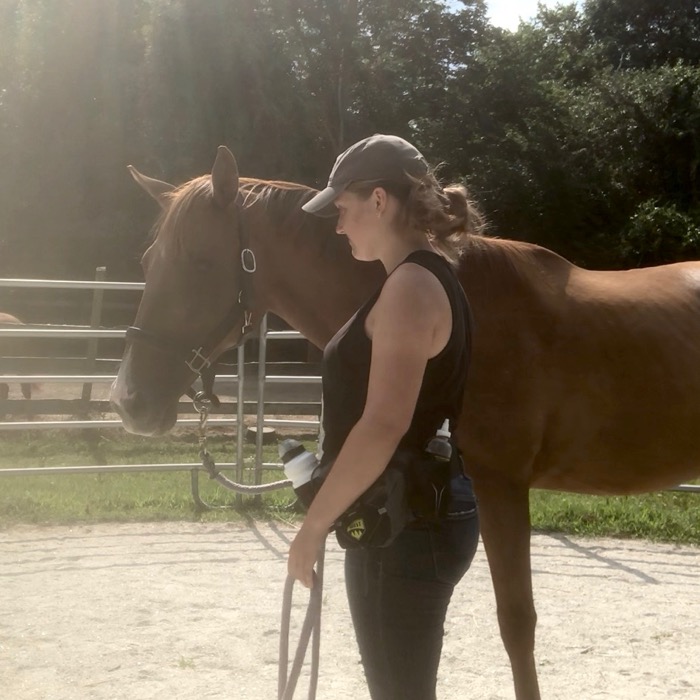 As the tactile information coming from the halter became clear to Fawn, interacting with Susannah became intrinsically rewarding. Horses strive for synchronicity with their herd and also with their person (ethologist Lucy Rees has written an entire Horses in Company about this.) Here is Fawn, so in-tune with Susannah that she’s walking in-step with her. No food reward is needed here, in fact, it would interrupt this lovely relaxed and companionable walk. 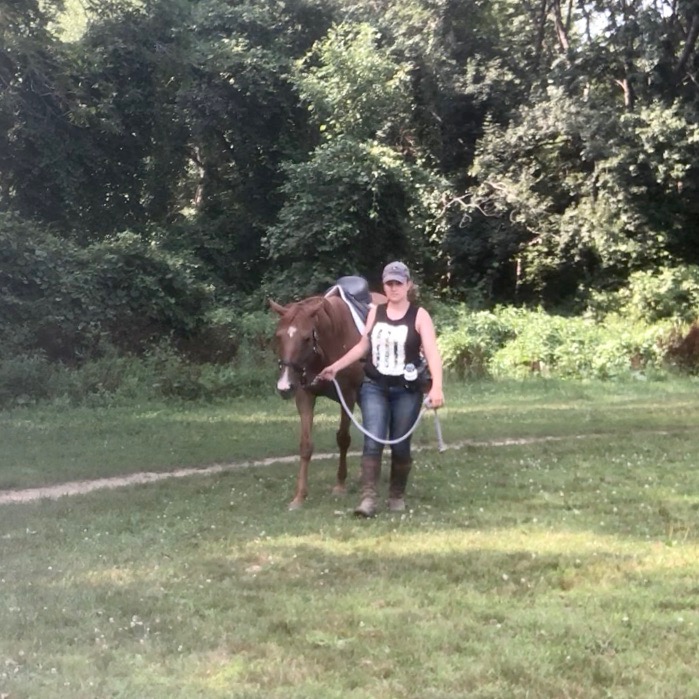 Susannah and I were also working with Fawn to get the mare to accept tacking up calmly. Our previous training session asked questions of Fawn – what are you comfortable with? Fawn’s inclination was to move away from the tack when we approached with it. I don’t think that anyone had explained to Fawn how she was supposed to stand when being tacked up. I think they probably followed her and slapped the saddle on. Being able to use the halter to position Fawn to stand still, with her head relaxed and forward, would be a key component in progressing with this training. Because earlier in this session Fawn had learned that the halter provided useful information that was worth following, Susannah was now able to use the halter to let Fawn know what was expected during saddling. In this video you can see how although Fawn first moved away from the pad, that Susannah was able reposition Fawn, and that the mare was able to comply in a relaxed way. In fact, when at liberty, Fawn chose to stay with us.

This training session spanned about an hour, with short exercises and breaks in between. In that amount of time, Fawn learned that the halter, which had been used to restrain and control her, was now the source of tactile information that leads to good things and makes communication easier for everyone. 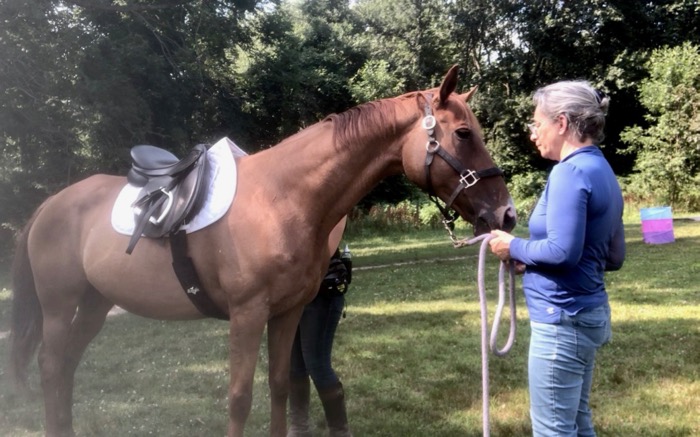 Note: There are times when the halter is used for restraint. Just like I wouldn’t walk a dog in the city without a leash on, or let a child cross a road without holding onto my hand, I wouldn’t take my horse somewhere without being able to keep him from taking off – or simply from getting in trouble walking down the barn aisle! But, when the horse is welcoming of the tactile information, those potentially dangerous situations are easier to get under control and defuse, and you can get right back to being in sync with your horse.