Rehab from an injury rarely goes in a straight line.

After our visit last month to Dr. Bubeck at Tufts (New England’s veterinary school has a clinic) we had a clear plan of action for Tonka’s left foot lameness. Rest, rehab (slowly increasing the amount and type of exercise) and injections of IRAP into the joint. IRAP takes the animal’s own blood and concentrates it for the bits that promote healing. It’s then injected, just like one would do steroids and hyaluronic acids. The fluid originates in the individual,  and it doesn’t have the deleterious side-effects of steroids, so – in theory – it’s the best option. It’s expensive (over $1,000 for 3 vials to inject) but worth it. That is, if it all goes according to plan.

Tonka had 2 injections, a week apart. These were done at our home barn by my superbly capable and careful vet, Dr. Monika. 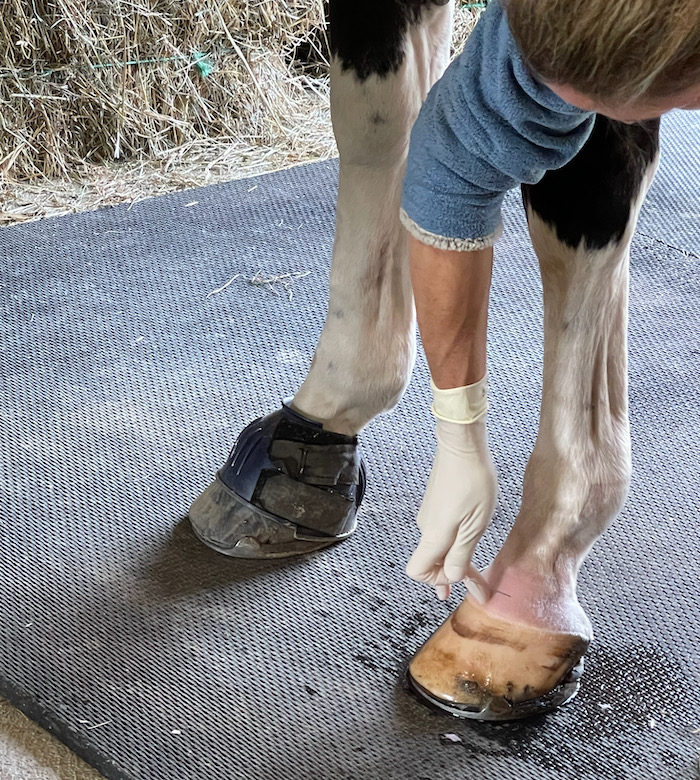 Unfortunately, Tonka is one of those rare outliers who doesn’t deal well with IRAP. His coronet band got hot and swollen. 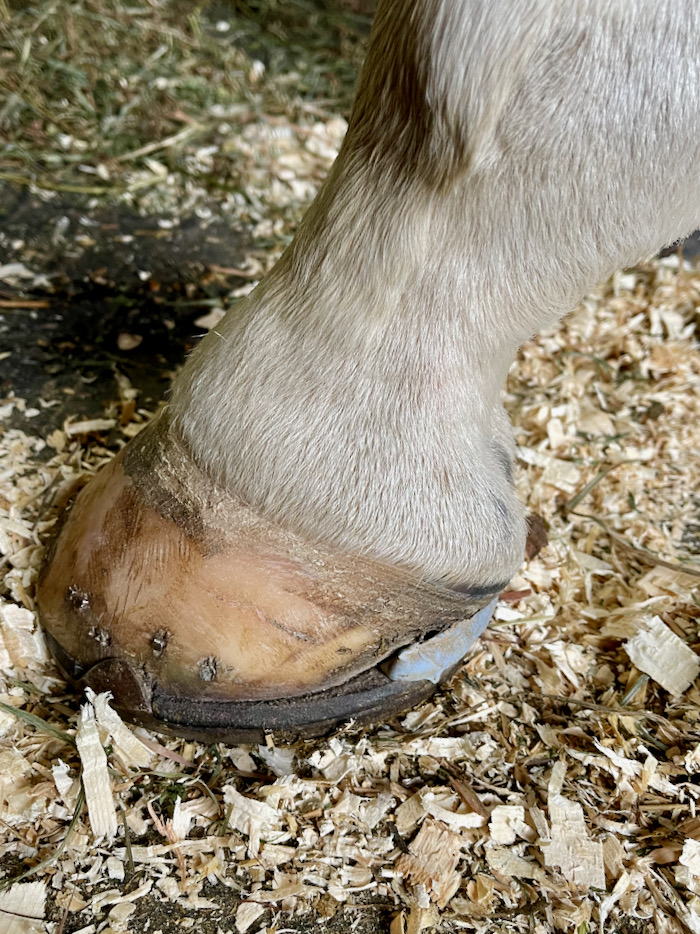 Tonka went severely lame. Worse than the mild symptoms that we were treating him for. I stopped the 15-minutes of rehab walking. Instead, Tonka got cold-hosed. (This, during a nor’easter in 40 degree F weather!)

I brought Tonka out of his stall to graze. But that was it. Even slow hand-walking was uncomfortable for him. 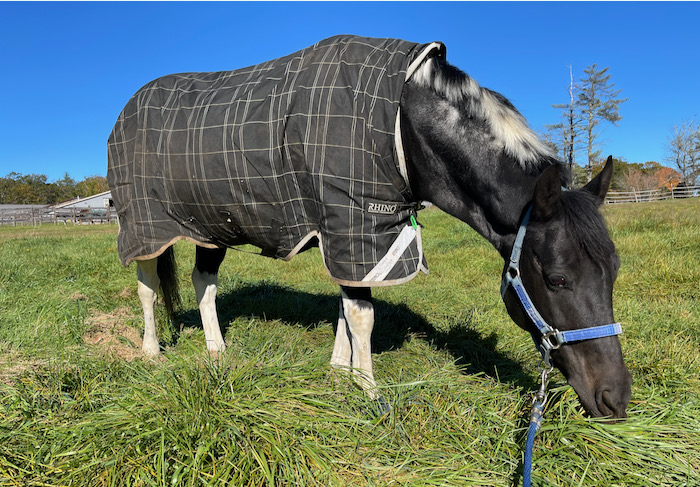 Tonka was a very good patient. Calm despite stall rest. He did take to nickering every time I appeared. Except for when I had my camera pointed at him so here is a video of his nice expression without the nickers!

The symptoms worsened. Dr. Monika put him on bute (reduces inflammation) and antibiotics. That made Tonka feel better, but it wasn’t a cure for whatever the underlying issue was. Some scary ideas about exactly what that might be were bandied about. Dr. Bubeck was called and she generously fit us into her very busy schedule.

Tonka looked genuinely happy to get into the trailer. He didn’t mind the two-hour drive to the veterinary hospital. Life had been boring and he likes this place! At Tufts there are veterinary students who dote on him and lots of interesting things to see. 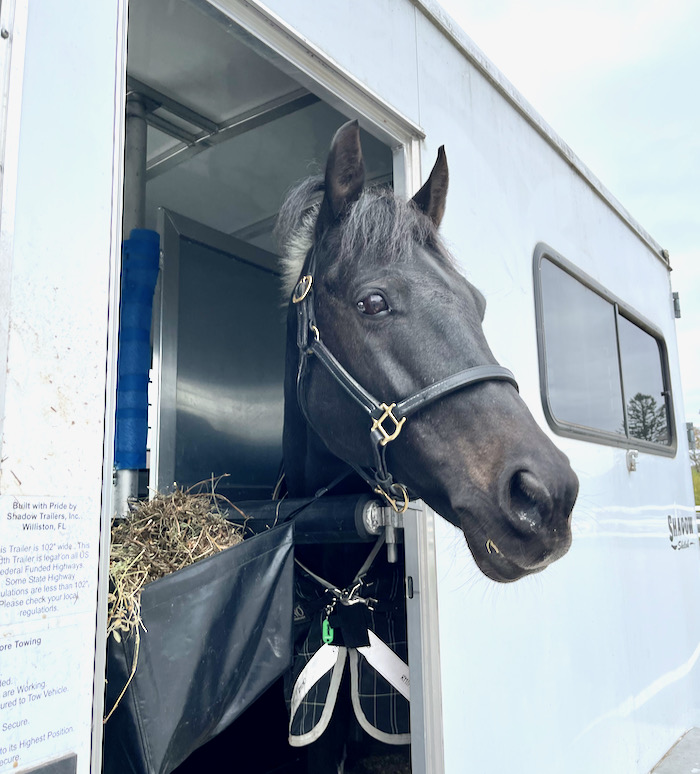 After watching Tonka limp trotting out, and then doing an ultrasound, Dr. Bubeck concluded that Tonka’s body had reacted to the injections by forming too many proteins in the joint fluid. These needed to be rinsed out with saline. This procedure didn’t require an incision, (whew!) but needles were inserted into the joint, and those tiny holes are possible points of infection. Tonka’s leg was wrapped.

Here he is with one of the vet techs who adore him. Tonka looks good in red, doesn’t he? But I’d rather that color was a saddle pad and not a bandage. 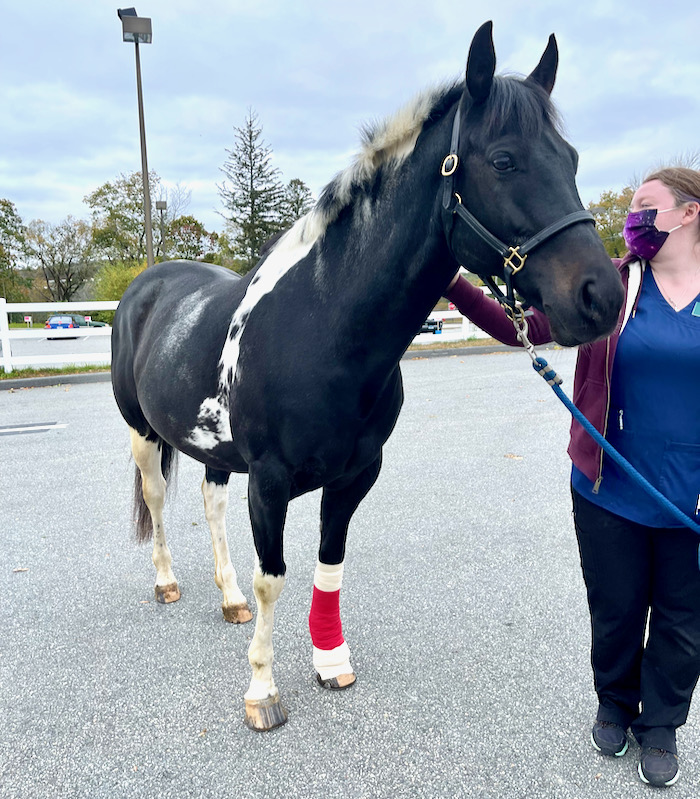 After what Tonka considered to be a nice afternoon at Tufts, I loaded him back up in the trailer. Dr. Bubeck and crew were impressed with how willingly and relaxed he walks into the trailer on his own.

We’re back home, and Tonka is still on stall rest. However, Dr. Bubeck is optimistic that his rehab can continue apace. Next week I can get on and do our daily walks from the saddle. That last IRAP vial, though, is going in the trash!

18 thoughts on “Tonka and IRAP”