Tonka and I have a relationship based on two-way communication. We both have a say. I trust that when Tonka stops in an alert posture that there is something to suss out. I don’t take that stop as a disobedience. Rather, it’s the start of a discussion. For example, yesterday when we were trail riding, there was a mountain biker far up ahead and around a bend. Tonka was aware of him well before I was. Once I saw what Tonka was concerned about, I told him that I knew what it was and it wasn’t a danger. I squeezed my legs and pointed his head in the direction to go. We had a brief discussion about how fast we’d do that. We continued on at the reasonable pace that I suggested.

But just like in any relationship, that discussion doesn’t always go your way. I have turned around for home when Tonka told me that there was something worrisome on the trail, even though I didn’t see it. There are times that I know better than Tonka. This, of course, is annoying to my horse, and since we have a relationship based on two-way communication, he lets me know. Since horses can communicate in ways that are potentially dangerous to their riders and themselves, I stop Tonka before he gets fully expressive!

I have the perfect example of this from last week’s jumping lesson. We usually start off trotting into a cross-rail and then cantering out. Then we do two jumps in a line. Trot in and canter over the next. Tonka did these in a relaxed manner. Then we cantered in and cantered out. Tonka started loosening up and picked up speed. After this warmup, we were ready to do the lesson’s main exercise. On this day, it was a line of three jumps: cross-rail, 6 strides to an oxer, 5 strides to a cross-rail.

Steph told me to trot to the first jump. Tonka knew that we were about to jump a line. He wanted to canter it. He knew, by how I told him to move forward off my leg, that I wanted a trot. This ticked him off. Tonka swiped his tail sideways and up. 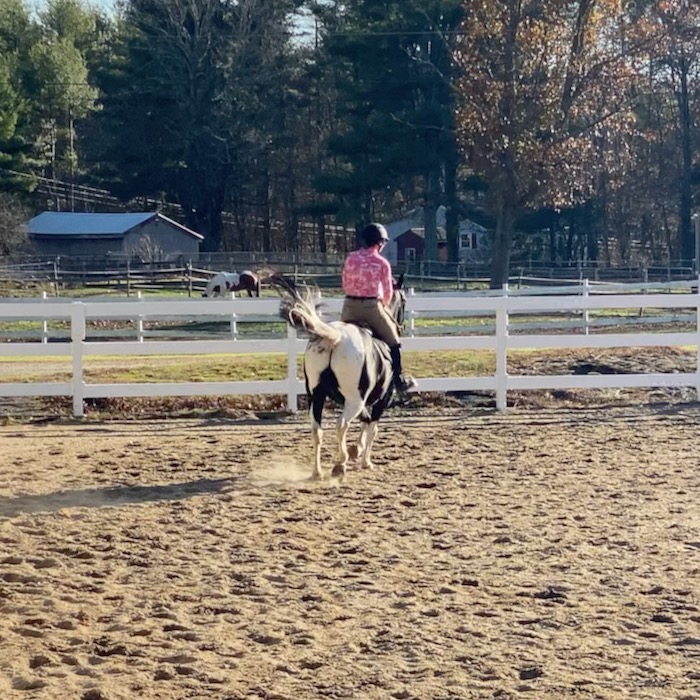 Then Tonka put his nose in the air and braced his neck. 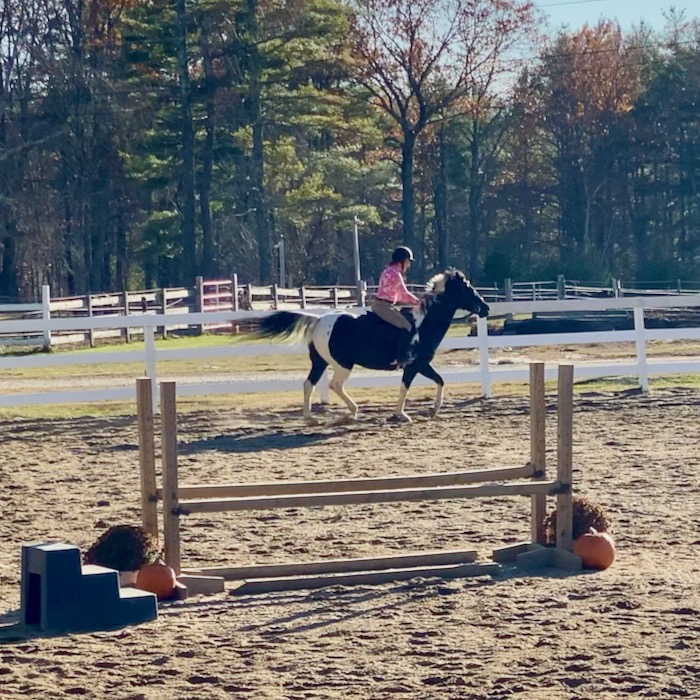 I said, Yes, you really do have to trot.  Despite Tonka’s dismay, he did. The first time we went through the line, it was awkward. That hesitant trot brought him in too slow. The next time Tonka insisted that it’d be better if he cantered. My first thought, when Tonka bucks at the canter, is that something hurts. This, though was him throwing a snit!

When we have such a disagreement, I hope that when Tonka sees the end result that he’ll understand why I’m insisting on doing what we’re doing. He usually does. In this case, as soon as Tonka was cantering through the jumps, his attitude improved. Look at that eager, cheerful expression. He’s capable of making the connection that trotting into the first jump brings the fun of the next two. 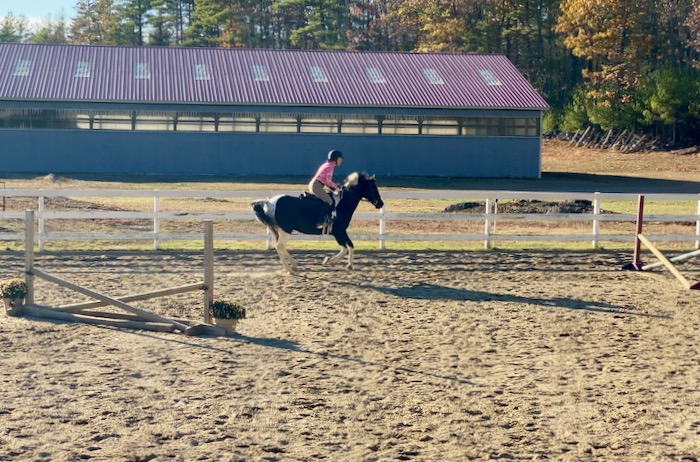 The next time we trotted the short side of the ring to the line, I had Tonka do a counter-bend (nose a tad to the rail) and I increased his energy at the trot. He was still annoyed (look at his agitated tail) going into the first jump, but then did the rest perfectly. With an eager expression!

To end the lesson, Steph said that we should do a diagonal line and to do it from the canter. This made Tonka very happy! Compare this photo to the one of the trot. Our bodies and our minds were in agreement. 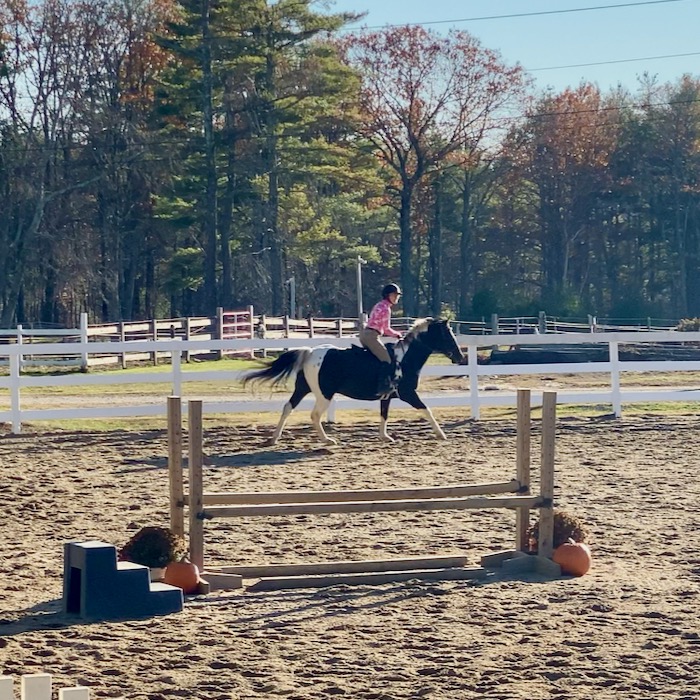 Here’s a video of that line. You can see Tonka getting ready to “discuss” his desire to canter, and then how easy he went into it when he realized that we were finally on the same page.

Note that Tonka drifts to the left in-between the jumps. To get him straight I pressed with my left calf. Tonka and I have done a lot of exercises on the flat teaching him to move off of my leg. He’s learned to respond to that piece of my body language, and I’ve learned to do it subtly, and also timed with the horse’s leg that I want to influence. Riding is so complicated! The conversation is body-to-body, from head to toe, ear to hoof. It’s ongoing and multilayered. One has to be able to do it mentally and physically with clarity. Even then you might not agree. It can be frustrating for both horse and rider. But keep at it, be fair and aware, and you can, literally, fly together. Or at least jump 18-inches off of the ground. 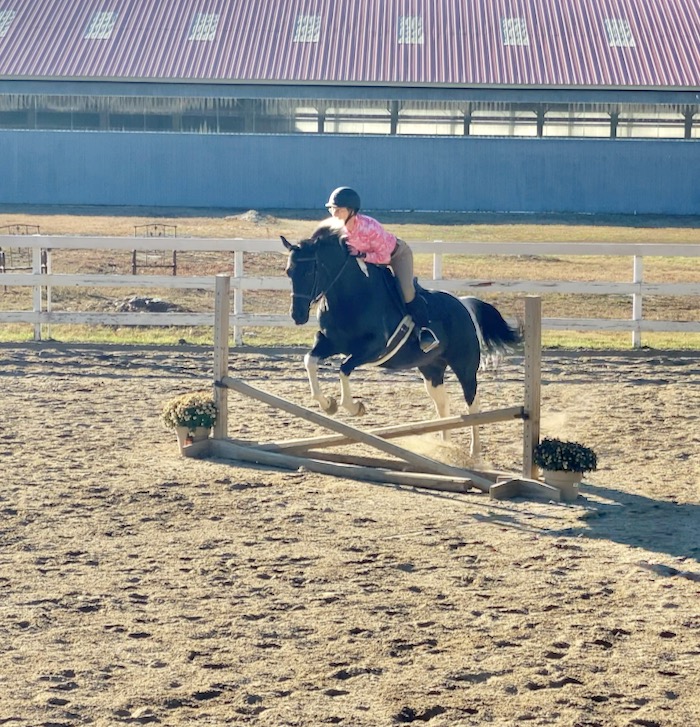 4 thoughts on “He’d Rather Canter”